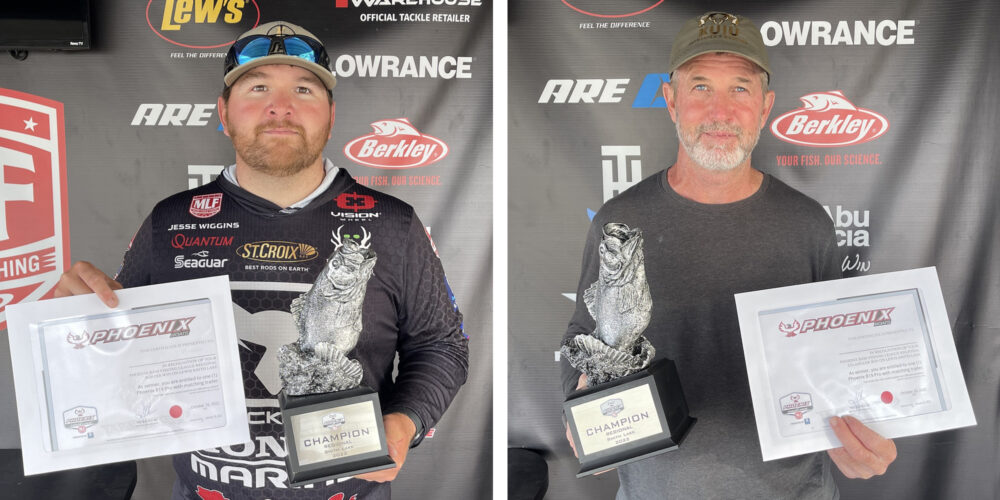 “The first day I caught a couple of quick keepers and then started running some history – spots I’d caught them on this time of year – and I was able to catch a couple more good ones, and then a 4½-pounder near the end of the day.

“Going into Day 2, I was about two pounds behind my brother, who was leading, and I knew I was going to have to get a couple of big bites to get a good bag,” Wiggins added. “I caught a couple of key keepers right off the bat running the same stuff I did before.”

Wiggins said he pulled four big bites from the same area that were key to his second day and gave him momentum and a one-pound lead going into the final day of competition. He felt like he needed 13 pounds to have a chance at the win. He started the final day the same way in the same spots he had started the previous two days; the spot produced two nice keepers. Wiggins said his morning fish came on a 2.8 Jackall Rhythm Wave swimbait and a small Keitech swimbait on a ¼-ounce Owner jighead. Later in the day, his fish came on a squarebill crankbait and a vibrating jig.

“This was my first time fishing a whole slate of a division of BFLs, and I did it because the Regional was on my home lake here at Lewis Smith,” Wiggins added. “This time of year, it can fish real tough and that’s one of the main reasons I wanted to be in it. A lot of times when it’s tough, you can have an advantage.”

Rounding out the Top 10 boaters were:

Wagner took home an extra $500 as the highest finishing Phoenix MLF Bonus member. Boaters are eligible to win up to an extra $7,000 per event in each Phoenix Bass Fishing League tournament if all requirements are met. More information on the Phoenix MLF Bonus contingency program can be found at PhoenixBassBoats.com.

The top six Strike King Co-anglers that qualified for the 2023 Phoenix Bass Fishing League All-American were:

Rounding out the Top 10 Strike King Co-anglers were:

The top four Strike King Co-anglers from each division that earned a $500 bonus for placing highest in the event were:

The top boaters and Strike King Co-anglers plus tournament winners from each Phoenix Bass Fishing League division will also earn priority entry into the MLF Toyota Series, the pathway to the MLF Tackle Warehouse Invitationals and ultimately the MLF Bass Pro Tour.