Jordan Lee Leaps from Last to First, Advances Directly to Championship Round 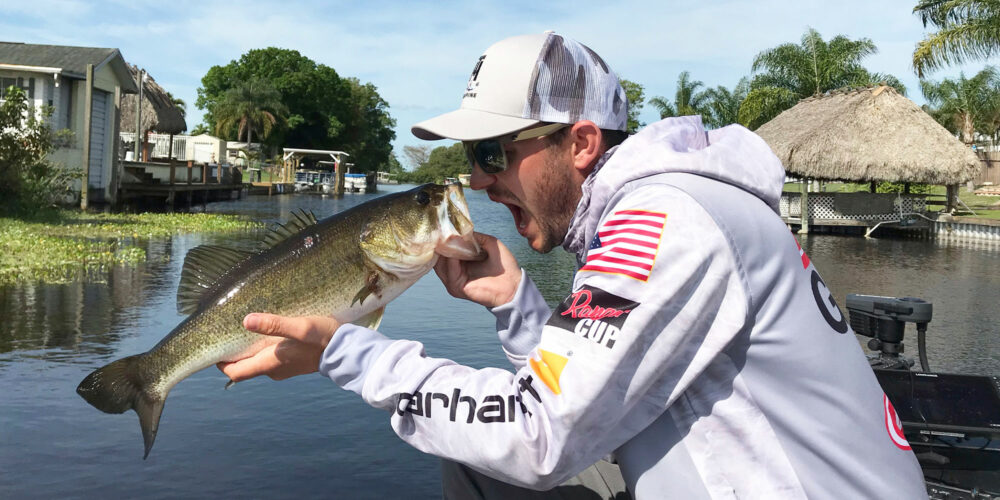 February 24, 2020 (Okeechobee, Fla.) – Jordan Lee won the Group B Qualifying Round of the Favorite Fishing Stage Two presented by Bass Cat with a one-day total of 36 pounds, 10 ounces. The 29-year-old steadily climbed SCORETRACKER®, passing Dean Rojas, who began Monday with the lead after catching 20 pounds, 5 ounces on Saturday. Lee earns a day off on Tuesday to advance directly to the Championship Round. Two other anglers who began their second day at zero pounds – Stephen Browning and Jeff Sprague – will join Rojas and 35 others to determine the final eight who will compete against Lee and Takahiro Omori, the winner of Group A Qualifying Round on Sunday, on Wednesday for a chance to win $100,000.

Lee said that he began the day with nothing to lose. After a scoreless Saturday, Lee opened his day with three, 4-plus-pound largemouth bass in the first Period for a total weight of 13 pounds, 5 ounces. Lee retained his lead through a scoreless third Period after a catching one weighing 6 pounds, 7 ounces late in Period 2.

“Today is a day for the history books; it was special,” said Lee as he returned to the ramp for the General Tire Takeout show on MLF NOW! “I went to a place I hadn’t fished since college; I had to work for them, but it was just the right move.”

When asked if his scoreless first day impacted his outlook going into today, Lee shared that he had hope starting today and decided to listen to his instincts, a strategy that also paid off for him in Eufaula at Stage One of the Bass Pro Tour earlier this month.

“Last night I was thinking about how I had gone with my gut already this season and it paid off big,” said Lee. “So, I went someplace today that I hadn’t been in a long time again and it worked. I could tell halfway through the day I had something special.”

Dean Rojas made the most of difficult lake conditions on Saturday to begin today with a 2-pound lead over Britt Myers. Despite best efforts, Rojas caught only three scoreable bass weighing in collectively at 7 pounds even to finish second, just missing the automatic berth to the Championship Round.

“I tried my hardest; I just never had a big bite,” reflected Rojas. “I’m going to think about my game plan and will have to make an adjustment. I missed an opportunity to qualify for the Championship Round, but I plan to change areas for tomorrow and see what I can make happen.”

Stephen Browning made a run in Period 3 catching 6 scorable bass in only 38 minutes. These, plus the one he caught midway through today’s second Period, gave him a two-day total of 18 pounds, 2 ounces after catching no scoreable bass on Day 1 of the Qualifying Round. Enough to secure 12th place, Browning advances to the Knockout Round.

“The area I fished on Saturday suffered a major temperature change in only two feet of water,” said Browning. “Then late in the third period, I hit a flurry – a fisherman’s dream.”

Much of the day’s drama unfolded on the elimination line as anglers battled for their place in Tuesday’s Knockout Round. Chris Lane snuck into 17th place with two, 2-pound bass within the last 30 minutes of the day. With only five minutes left in the day, Alton Jones caught a 3-pound, 2-ounce bass, which moved him to 18th place and knocked Boyd Duckett out of the Knockout Round into 21st place.

The Top 10 of the Qualifying Round, Group B finished Day 2 as follows:

Scott Suggs caught the Berkley Big Bass of the Day weighing in at 6 pounds, 11 ounces. Suggs finished fifth overall and will advance into the Knockout Round with a strong showing toward his Heavy Hitters qualifying weight. MLF Heavy Hitters presented by Venmo brings together the 30 anglers with the heaviest “virtual bags” after five Stages of the Bass Pro Tour. Anglers will compete for over $750,000 in prizes including a Berkley Big Bass payout ranging from $25,000 to $100,000 per day. Heavy Hitters takes place on the Kissimmee Chain (Fla.) May 16-20, 2020.

Today’s event concluded the Qualifying Rounds of the Favorite Fishing Stage Two presented by Bass Cat. Two anglers advanced directly into the Championship Round on Wednesday: Takahiro Omori, winner of Group A and Jordan Lee, winner of Group B. The remaining eight spots in the Championship Round will be determined in Tuesday’s Knockout Round, in which the anglers who finished in places 2-20 on their respective days will compete in a field of 38 for the top eight spots.

The 38 anglers competing in the Knockout Round include:

Fans can catch all the action every day of competition on MLF NOW! live stream beginning at 7:45 a.m. ET on MajorLeagueFishing.com or download the MLF App for your Apple or GooglePlay device or on MyOutdoorTV (MOTV).