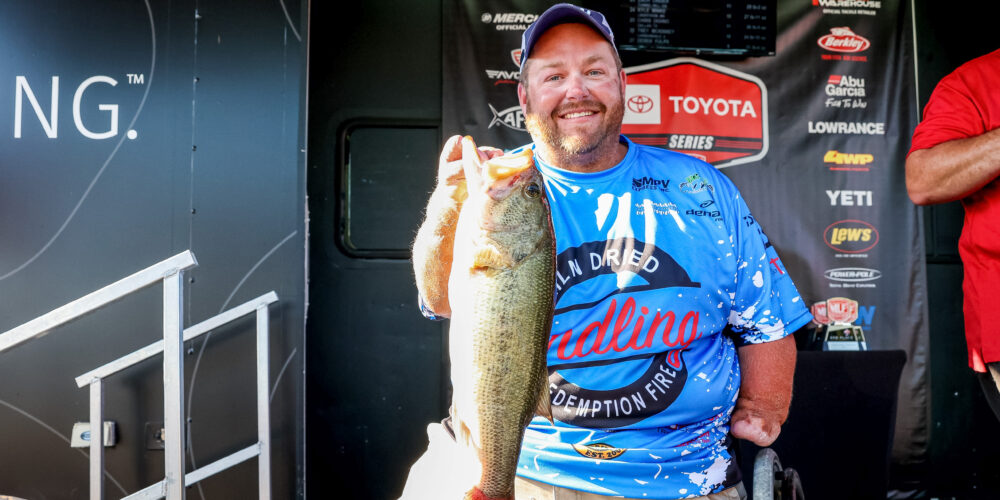 WARSAW, Mo. – Pro Hunter Baughman of Judsonia, Arkansas, brought a limit weighing 19 pounds, 1 ounce to the scales Saturday to win the Toyota Series Presented by A.R.E. at Truman Lake. Baughman’s three-day total of 15 bass weighing 48-10 earned him the win by a 1-pound, 10-ounce margin over second-place pro Brad Jelinek of Lincoln, Missouri, and earned Baughman the top payout of $32,429.

Baughman moved into the top five on Day 2 before bringing the biggest bag of the tournament to the stage on the final day to solidify the biggest win of his career.

“I’m tickled about this win,” Baughman said. “I’ve been doing this for a long time at this level and I’ve fished nationally with another league for two years, but I’ve never won anything outside of a statewide tournament. I’m just absolutely beside myself.”

Having never fished Truman Lake before, Baughman said he leaned heavily on the 100-plus waypoints he logged during three days of practice. He targeted bass in offshore brush and rock piles, ranging from 5 to 15 feet in depth.

“Everyone else was graphing, but when I’d find several piles, I’d go 700 or 800 yards graphing with the LiveScope and find little stumps no one was seeing on their side imaging,” Baughman said. “I might catch one on every tenth stump, but it would be a good one.”

Baughman said he caught the majority of his weight from 8:30 to 10:30 a.m. every day and caught all his fish on a ¾-ounce Brazalo football jig and a 5/16-ounce Brazolo finesse jig.

Baughman, who lost both of his legs below the knees, his left hand and digits on his right hand to bacterial meningitis as an infant, said he counts the win as another huge blessing and an additional opportunity to show others that with hard work, they can do anything they put their mind to.

“God is so good and has just blessed me in my life,” Baughman said. “I got sick at 9 months old, and the doctors said I wouldn’t make it, so to just be here is amazing – and to have the ability to catch some fish every once in a while on top of it, is just awesome.”

Brad Jelinek took home an extra $1,000 as the highest finishing Phoenix MLF Bonus member. Boaters are eligible to win up to an extra $35,000 per event in each Toyota Series tournament if all requirements are met. More information on the Phoenix MLF Bonus contingency program can be found at PhoenixBassBoats.com.