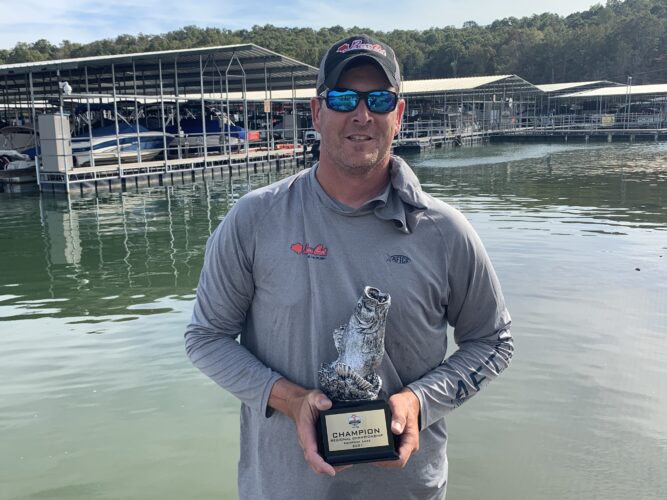 MOUNTAIN HOME, Ark. – Brad Kell of Benton, Kentucky brought a three-day total of 15 bass to the scale on Saturday, weighing 34 pounds, 15 ounces to win the Phoenix Bass Fishing League Regional Championship Presented by T-H Marine at Norfork Lake. For his victory, Kell earned $60,000, including a Phoenix 819 Pro bass boat with a 200-horsepower Mercury outboard and $10,000, along with lucrative contingency awards, including up to an additional $7,000 Phoenix MLF Bonus. Kell also received automatic entry into the 2022 Phoenix Bass Fishing League All-American Championship, June 2-4, at Lake Hamilton in Hot Springs, Arkansas, as well as priority entry into the Toyota Series – the pathway to the Tackle Warehouse Pro Circuit and ultimately the Bass Pro Tour.

While Kell is a far cry from a Norfork local, he said he’s certainly no stranger to the area.

“I’ve been to the area quite a few times as a kid,” said Kell. “But I’ve always been trout fishing on the Norfork and White rivers. I’ve been down to [Norfork] for half days of bass fishing in some Bass Cat tournaments, but this was the first week I’ve spent full days bass fishing on it.”

Kell started practice chasing the topwater bite, but with rain coming in on the second practice day, he said he knew that wouldn’t hold up throughout the event.

“I started looking for brush piles and in two hours I found two of the biggest schools of bass I’ve ever found in my life – and I have found some on Kentucky Lake that had 400 or 500 in it. These schools were that size, but just smaller than a normal Kentucky Lake bass.”

After discovering two mega schools, Kell said he was uneasy about what the tournament day would bring, but when things got rolling on Day 1, it didn’t take long for him to start putting on a show.

“I went to my second area on Day 2 and they were there, but I didn’t catch them as good,” said Kell. “I felt good though because I had 12 pounds with the fog delay and the shallow water guys just didn’t catch them.”

Taking the lead after Day 2, Kell went back to his second school on the final day, but things weren’t going as smoothly.

“I was stressing on the final day because I culled the wrong fish twice,” he said. “I was catching them so fast, and they all looked identical, but I was culling the wrong fish. Around noon I started thinking I should have more weighed than I did and when I looked in the livewell I still had one that weighed 1-7.

“I got my plug hung in a brushpile and I was shaking it when I got right on top of it and a 2 ½- or 2 ¾-pounder ate it and I flipped it in the boat and that’s when I knew some things you can’t stop from happening.”

To target his schools of fish, which were in anywhere from 13 to 22 feet of water, Kell said a Strike King 6XD and 10XD did the heavy lifting for him throughout the tournament. He also caught several fish on a Mark Kirby spinnerbait and a ¾-ounce All Terrain Tackle jig with a Strike King Rage Craw trailer, with his two biggest fish coming on a 5-inch Ignite Swimbait.

With this being just his second season fishing the LBL Division, Kell has made the Regionals two years running. Though he’s late to the party, he said he’s happy to finally have accomplished one of his fishing goals.

“This feels great,” said Kell of his win. “When the fishing went downhill on Kentucky Lake, I knew this would be the time to go try and make the All-American. I’m 43 and I started fishing [BFLs] when I was 41, so this was the time to do it. My kids are old enough, my wife is super supportive, so I started fishing [with MLF].

Kell said he was worried he wouldn’t even make the Regional this year, due to missed opportunities at the Super-Tournament and schedule conflicts with fishing the Wild Card Regional.

“However, everything worked out perfectly. It just fell into place, and I think I might fish the Toyota Series next year and see how that goes,” said Kell.

Cunningham took home an extra $500 as the highest finishing Phoenix MLF Bonus member. Boaters are eligible to win up to an extra $7,000 per event in each Phoenix Bass Fishing League Presented by T-H Marine tournament if all requirements are met. More information on the Phoenix MLF Bonus contingency program can be found at PhoenixBassBoats.com.

The Phoenix Bass Fishing League Presented by T-H Marine Regional Championship on Norfork Lake was hosted by the Mountain Home Area Chamber of Commerce. It featured the top pros and Strike King co-anglers from the Arkie, Illini, LBL and Ozark divisions.