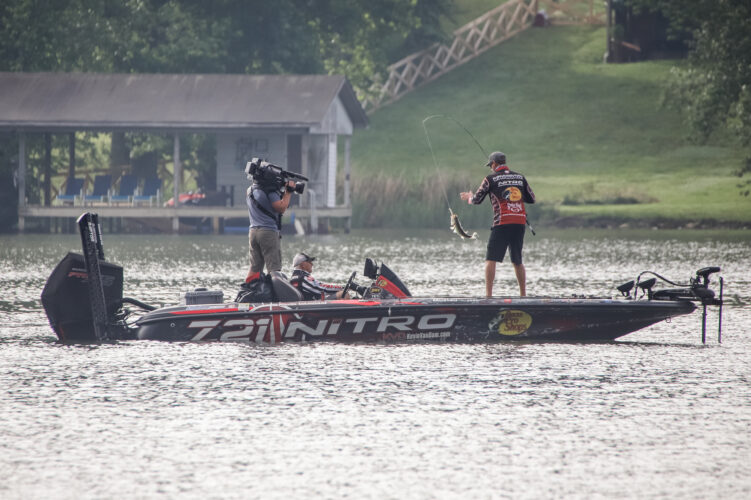 Link to Photo of Knockout Round Winner Kevin VanDam
Link to Video of Fish Catch Highlights from Day 5 at Lake Chickamauga, Knockout Round

DAYTON, Tenn. – Bass Pro Shops pro Kevin VanDam of Kalamazoo, Michigan, caught 18 bass Tuesday totaling 46 pounds, 6 ounces to win the Knockout Round and advance to the final day of competition at the Major League Fishing (MLF) Bass Pro Tour B&W Trailer Hitches Stage Four Presented by ATG by Wrangler at Lake Chickamauga in Dayton, Tennessee. The final 10 anglers are now set, and competition will resume Wednesday morning with the Championship Round. Weights are zeroed, and the angler that catches the most weight will win the top prize of $100,000.

The six-day tournament, hosted by Fish Dayton and the Rhea Economic & Tourism Council, featured 80 of the top professional anglers from around the world competing for a purse of $805,000, including a top cash prize of $100,000 to the winner.

The top eight pros from Tuesday’s Knockout Round that will compete in Wednesday’s Championship Round on Lake Chickamauga are:

“Today was a really good Knockout Round for me,” said VanDam, who qualified for his first Championship Round of the season. “It started off pretty slow, but I made a good decision and started to get a little movement going. I got a few fish on the SCORETRACKER®, and once that happened I knew that if I just stuck to my game plan, I could make it happen today. Lo and behold, we’re moving on to Championship Round and I couldn’t be more excited.”

VanDam said that he is fishing how he loves to fish this week – out on the Tennessee River ledges.

“This is my favorite way to fish. I love ledge fishing. It’s something that I’ve got a lot of experience in, and I’ve had a lot of success up and down the Tennessee River,” VanDam said. “I’ve got a whole cranking system that I’ve built around it with Lew’s. We’ve got a whole new series of rods and reels for it, and that’s what I’m using. I’m doing what I’ve got the most confidence in. I’m pretty dang dialed in this week and I understand the timing of these fish and how they’re moving.

“There is a lot of things changing by the minute, though, and that’s why you’re seeing the diversity from a lot of guys,” VanDam went on to say. “It’s going to be a shootout tomorrow. It’s going to be a really, really fun day to watch as a fishing fan. I’m fishing against some of the best guys in the world at this type of fishing. It’s going to come down to some fireworks, and hopefully I’m in contention at the end and can make it happen. The last time we were here at Chickamauga for the Bass Pro Tour I didn’t have a great event, so I’m looking forward to rectifying that with this one.”

Also making his first Championship Round on the Bass Pro Tour this season is the reigning Angler of the Year, Jordan Lee. Although he didn’t divulge any real details, he did say that he was dialed in to two main baits, and specifically mentioned a hair jig.

“I had one good flurry this morning and got out to the lead, and then I just kind of hit a lull for a couple of hours in the middle of the day,” Lee said. “This afternoon I caught two that really just sealed the deal for me. I caught them on two main baits, using my new line of Abu Garcia rods that I’ve got coming out this summer. I’m real excited about them. They’re affordable, and they have really good blanks. That’s what I’ve been using, just dragging stuff like a hair jig.

“I’m tickled to death to be going back out there again tomorrow,” Lee continued. “It’s my first final-day cut of the year, and I can’t wait to see what happens.”

The 40 Anglers in Group A competed in their two-day qualifying round on Friday and Sunday – the 40 anglers in Group B on Saturday and Monday. After the two-day Qualifying Round, the anglers that finished in 2nd through 20th place from both groups advanced to Tuesday’s Knockout Round, while the winner from each group advanced directly to Wednesday’s Championship Round. In the Knockout Round, the weights were zeroed and the remaining 38 anglers competed to finish in the top 8 to advance to the Championship Round. Tomorrow, in the final day Championship Round, weights are zeroed and the highest one-day total wins.

The final 10 anglers will take off from the Dayton Boat Dock, located at 175 Lakeshore St., in Dayton, at 6:30 a.m. ET Wednesday. The General Tire Takeout and Championship Moment will also be held at the Dayton Boat Dock, beginning at 3:30 p.m. Fans are welcome to attend all takeoff and takeout ceremonies and also encouraged to follow the event online throughout the day on the MLF NOW!® live stream and SCORETRACKER® coverage at MajorLeagueFishing.com.

The MLF NOW!® broadcast team of Chad McKee, Marty Stone and J.T. Kenney will break down the extended action from the final day of competition on Wednesday from 7:45 a.m. to 3:30 p.m. ET. MLF NOW!®  will be live streamed on MajorLeagueFishing.com and the MyOutdoorTV (MOTV) app.