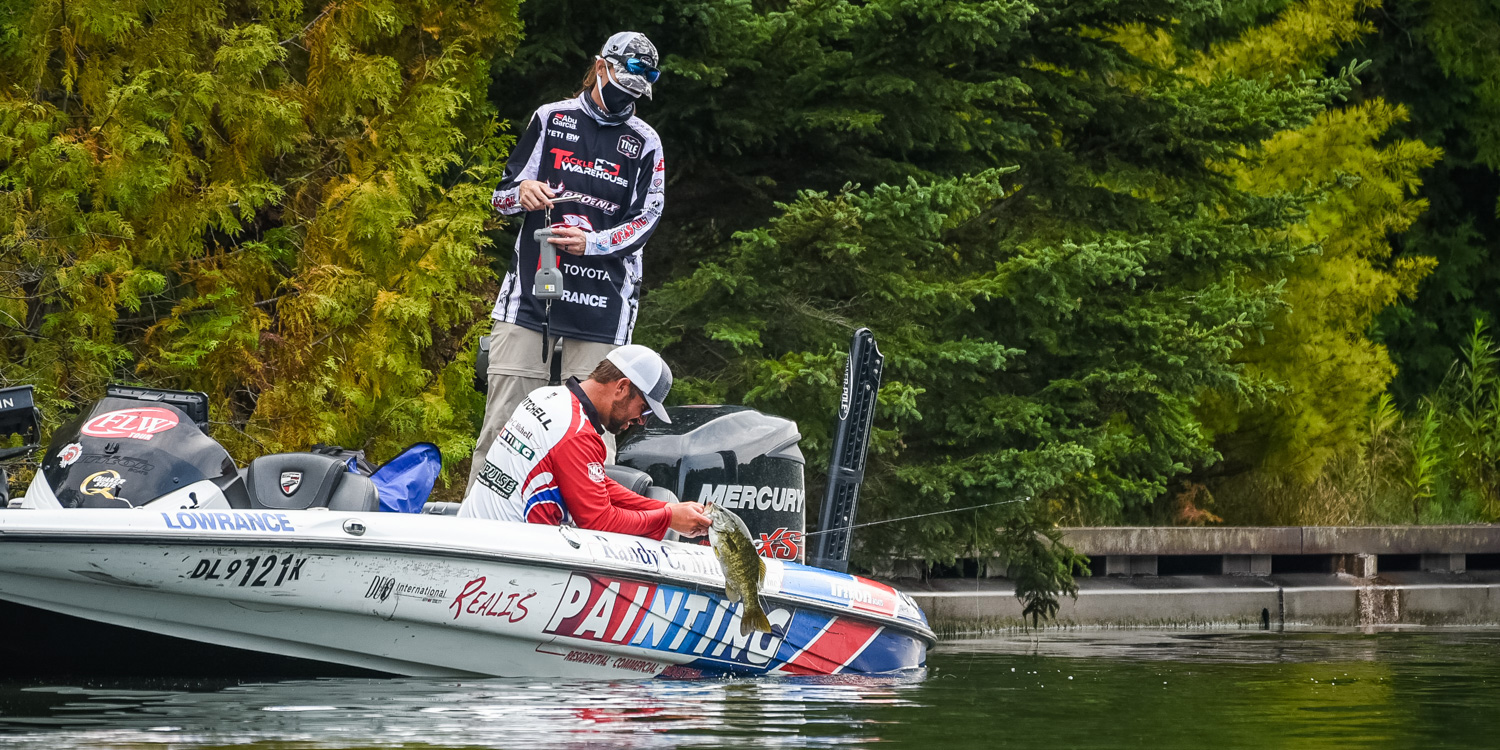 Kurt Mitchell took an early and commanding lead during Group A's Qualifying Round 1, catching 119 pounds, 10 ounces worth of bass. Photo by Charles Waldorf

The tournament, fished using the Major League Fishing (MLF) catch-weigh-immediate release format, showcased Mitchell lighting up the SCORETRACKER® all day long and establishing a commanding 56-pound, 10-ounce lead over second-place pro Grae Buck of Green Lane, Pennsylvania, who caught 17 bass totaling 63 pounds even. The six-day event features the top 50 professional anglers from the 2020 Tackle Warehouse Pro Circuit season angling for a piece of $820,000, including the first-place prize of $200,000.

The 25 anglers that competed Monday in Group A will take Tuesday off before returning to the water on Wednesday to finish their two-day Qualifying Round. The 25 anglers in Group B will have their first day of competition on Sturgeon Bay, Tuesday.

“It was just a phenomenal day for me – one of those days where nothing goes wrong and everything works out like it’s supposed to,” said Mitchell, a five-year veteran of the Tackle Warehouse Pro Circuit who is fishing in his second championship event. “It was my first time fishing at Sturgeon Bay, my first time fishing the MLF format, and now my first time leading a pro event after the first day.”

Mitchell said that he caught the majority of his weight from one area, a current break that he had found in his practice. He caught his fish using two key baits – a drop-shot rig with a Yamamoto Shad Shape Worm and a Keitech Swimbait with a 3/8-ounce Dirty Jigs swimbait head.

“It wasn’t really anything special, just basic smallmouth tactics and baits,” Mitchell said. “I just got on some groups of fish that wanted to bite. The bigger ones seemed to come on the Keitech, but I caught more on the shad shape worm. I had no idea that I was going to catch that much.

“I’m not sure exactly what I’m going to do when I get back out there on Wednesday,” Mitchell went on to say. “I might try out some new areas, or I might just go sit on my best spot to make sure no one else fishes it. Either way, I can’t wait to get back out there.”

The Top 10 pros after day one (Group A) on Sturgeon Bay are:

Overall there were 228 bass weighing 750 pounds, 8 ounces caught by the 25 pros in Group A on Monday. Mitchell also caught the largest fish of the day – a chunky 5-pound, 10-ounce smallmouth bass.

The Tackle Warehouse TITLE presented by Toyota, the FLW Pro Circuit Championship, is hosted by Destination Sturgeon Bay. The total purse for the event is more than $820,000, including a top prize of $200,000.

Unique to the TITLE Championship, the event is being fished using the MLF catch-weigh-immediate release format. A select group of 25 pros (Group A) will compete on Days 1 and 3, with the other 25 pros (Group B) competing on Days 2 and 4. The Top 10 pros from each group based on their cumulative two-day total will advance to Day 5. Only the Top 10 pros will continue on to the sixth and final day of competition, with the winner earning the inaugural Tackle Warehouse TITLE Championship Belt presented by Toyota.

FLW tournament fishing can be seen on the Emmy-nominated “FLW” television show while Bass Fishing magazine delivers cutting-edge tips from top pros. Acquired by Major League Fishing in late 2019, FLW is expanding its programming in 2020 to the Outdoor Channel and the Sportsman Channel as well as on-demand at MyOutdoorTV (MOTV). For more information visit FLWFishing.com and follow FLW at Facebook, Twitter, Instagram and YouTube.