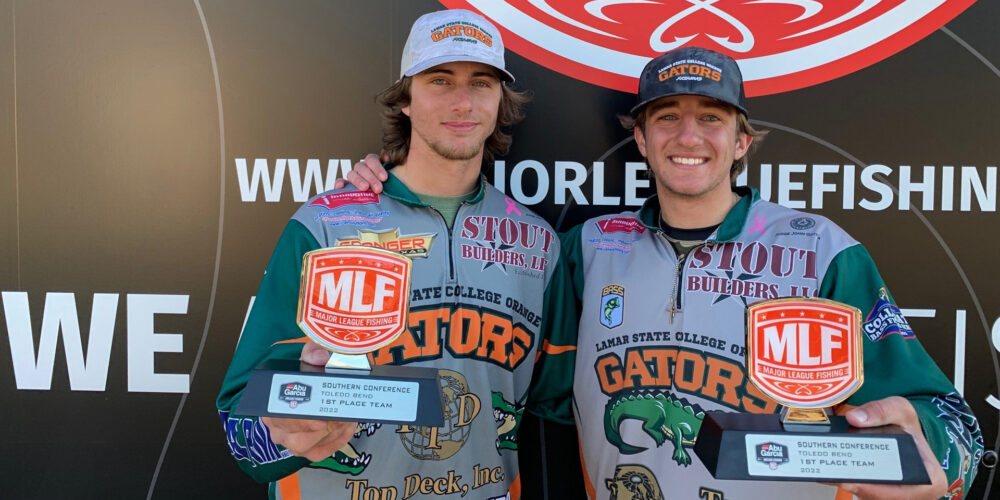 “Dakota and I had been working up for this one,” said Buchholz. “And everything went right for us. When it’s your time, it’s your time. We just caught them. We never lost a fish, and it just happened. This feels awesome.”

Buchholz, who claims Sam Rayburn as his home lake, said he visited Toledo Bend the week before the tournament and fished for two days and established a pattern that produced 16 pounds one of those days. For the tournament, the team continued focusing on that pattern – targeting rocks in 5 to 15 feet of water. Buchholz said the key bait for the team was a Strike King Chick Magnet Flat-Sided Crankbait.

“The first rock point we pulled up to I caught one that was 5½ pounds on the Chick Magnet,” Buchholz said. “My partner caught two 2½-pounders on a jerkbait and we ended up culling up.”

The top 10 teams advanced to the 2023 College Fishing National Championship:

MLF College Fishing teams compete in three regular-season tournaments in one of five conferences – Central, Northern, Southern, Southeastern and Western. The top 10 teams from each division’s three regular-season tournaments and the top 20 teams from the annual Abu Garcia College Fishing Open will advance to the following season’s National Championship. The 2022 MLF Abu Garcia College Fishing Presented by YETI National Championship Presented by Lowrance will be held on Fort Gibson Lake in Wagoner, Oklahoma, March 29-31, and is hosted by the Wagoner Area Chamber of Commerce.