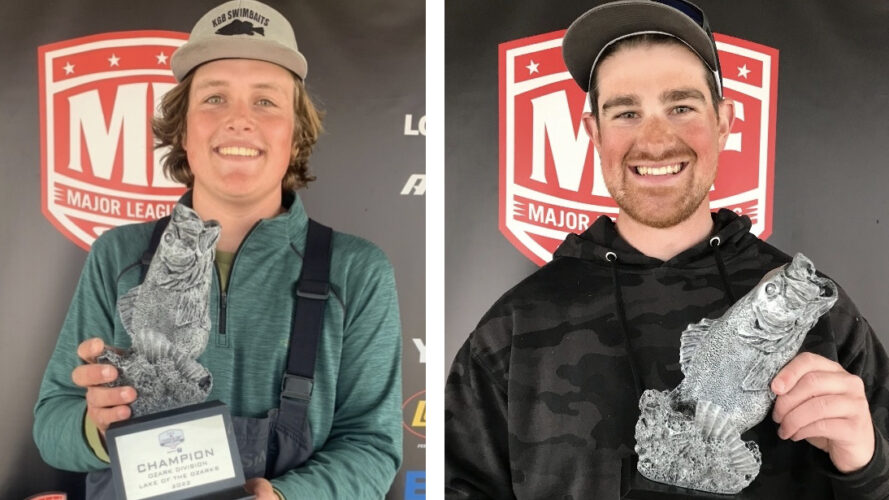 “I caught a lot of fish today,” said Edwards, adding that he fished around Kimberling City and the James River. “I found bait, and where you found bait is where you found fish. I was just looking for birds diving for bait and then using my graph to find fish. I’d roll up on a school and start smashing them.”

Edwards said he caught 30 bass over three pounds during the course of the day and described the action as “insane.” He relied on a jerkbait, weighted with lead tape and wire on the hooks to get the bait down to the depths where fish were holding. A Rapala Jigging Shad Rap Ice and a small Keitech soft plastic bait filled his limit. He targeted bass in 100 feet of water that were suspended in depths from 10 to 60 feet.

“Wherever they were blowing holes in the baitfish is where I was catching them,” Edwards said. “I rolled up early to my spot where I knew they were loaded, made a cast and caught a 5-pounder, then caught a few more good ones. Then the sun came up and they got a little finicky. So I started throwing the little Keitech and hitting them in the face with it, and they just couldn’t resist it.”

Ells had a 6-pound, 10-ounce largemouth that was the heaviest of the event in the Boater Division and earned the day’s Berkley Big Bass Boater award of $1,000.

Michael Mulberry of Galena, Missouri, caught the largest bass in the Co-angler Division, a fish weighing in at 6 pounds, 1 ounce. The catch earned him the day’s Berkley Big Bass Co-angler award of $500.