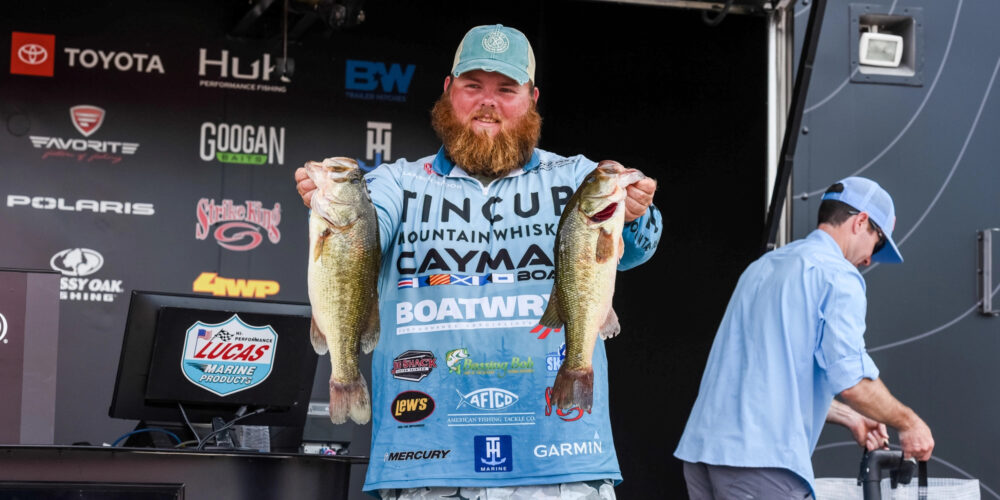 MARBURY, Md. – Rookie Lawson Hibdon of Versailles, Missouri, extended his lead on Day Two of the MLF Tackle Warehouse Pro Circuit Presented by Bad Boy Mowers, Federal Ammunition Stop 5 Presented by Lucas Oil at the Potomac River on Friday, bringing a five-bass limit to the scale weighing 17 pounds, 8 ounces. Hibdon’s two-day total of 10 bass weighing 34 pounds, 8 ounces gives him a 2-pound, 2-ounce advantage heading into Day 3 of the four-day competition featuring bass fishing professionals from around the world, competing for up to $135,000.

Pro Adrian Avena of Vineland, New Jersey, moved from fourth place into second, weighing 16 pounds even on Friday for a two-day total of 32-6, with rookie Ricky Robinson of Greenback, Tennessee making a giant leap from 59th place into third with the biggest bag of the tournament – 18 pounds, 12 ounces – bringing his total to 32-2.

Although he had a stellar end to his day, Hibdon said his day started off much slower than he had been hoping for.

“I really thought I’d be able to pull up to the first stretch of docks and catch about 12 pounds in the first 30 minutes or so, and that didn’t happen,” said Hibdon. “It was a lot tougher today – It may not look like it, but it was. I only caught 8 or 9 keepers and only had probably 15 bites total.”

Hibdon said his pattern has been evenly split between fishing hard cover and grass.

“I have a ton of experience fishing docks, but I’ve fished a lot of grass over the years as well,” said Hibdon. “There are a few smaller lakes back home that have some grass and we love fishing the grass up north. This is altogether different, but it’s still grass and the fish still act the same. I don’t care for it as much as flipping boat docks, but I also can’t get near the bites flipping boat docks, so I have to mix some grass in with it.

“I caught some of the bigger ones today around docks, rocks and basically anything that looks right,” continued Hibdon. “I’m just running around until I see something that works, but about half of the fish today were out of the grass as well.”

While he stuck with a lot of the same baits as yesterday – spinnerbaits, ChatterBaits and worms – Hibdon said he did make some color changes throughout the day.

“The tide pushed dirtier water into one of my areas, so I switched to some darker colors at one point,” said Hibdon. “It didn’t seem to make much of a difference though, the fish still missed it a lot. I may have to keep searching for something else tomorrow. I’m not sure I can go back to the same places and even catch 10 pounds.

“I fished a lot of new stuff today – a lot that didn’t work, but some that did. They just weren’t biting much today. I’m catching some good quality fish, but just not many of them. My biggest one came out of a spot I didn’t really expect to catch one, so that was a bonus because it was much tougher than I expected it to be after having so many bites yesterday.”

The top 20 pros after Day 2 on the Potomac River are:

Darrel Robertson of Jay, Oklahoma won the day’s $500 Berkley Big Bass award in the pro division after bringing a largemouth weighing 5 pounds, 8 ounces to the scale.

In Tackle Warehouse Pro Circuit competition, the full field of anglers competed in the two-day opening round on Thursday and Friday. The top 50 pros based on their two-day cumulative weight now advance to Saturday. Only the top 10 pros will continue competition on Sunday, with the winner determined by the heaviest accumulated weight from the four days of competition.

Anglers will take off at 6:30 a.m. ET Saturday and Sunday from Smallwood State Park, located at 2750 Sweden Point Road in Marbury. Weigh-ins will also be held at the park daily at 3 p.m. Fans are welcome to attend the event or follow the action online through the MLF NOW! live stream and coverage at MajorLeagueFishing.com.

The Tackle Warehouse Pro Circuit Presented by Bad Boy Mowers, Federal Ammunition Stop 5 Presented by Lucas Oil at the Potomac River will feature live on-the-water coverage and a two-hour action-packed television show that will premiere on the Outdoor Channel on Sunday, August 29 from 7 to 9 a.m. ET and re-air on the Sportsman Channel this fall. Weigh-ins will be streamed daily, and fans can catch live on-the-water action all day Saturday and Sunday, June 19-20 on MLF NOW! beginning at 7 a.m. ET at MajorLeagueFishing.com.