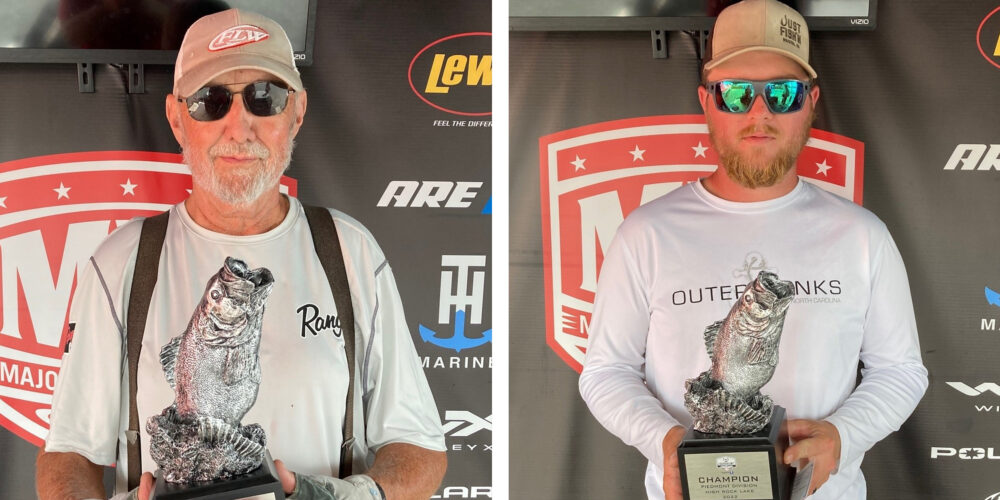 Mixon said practiced for five days before the event and ended up targeting piers in Abbot’s Creek that sat in four feet of water, but he caught his bass where the piers met the bank in one foot of water. He fished a black Zoom Trick Worm for his pier fish, and switched to a Carolina rig with a green-pumpkin-colored Zoom Brush Hog in the main river of High Rock Lake later in the day.

“When I sat the hook, water just boiled,” Mixon said.

Mixon said after catching a 4-pounder and one that weighed 6-1, the thought of a win crept into his mind.

“I was fishing against 12 of the best guys on High Rock, so I wasn’t guaranteed anything,” Mixon said. “You can’t take anything for granted until you weigh in.”

Chad Poteat of Mount Airy, North Carolina, had a bass that weighed 6 pounds, 11 ounces that was the heaviest of the event in the Boater Division and earned the Berkley Big Bass Boater award of $465.

Tony Toombs of Drakes Branch, Virginia, caught the largest bass in the Strike King Co-angler Division, a fish weighing in at 5 pounds, 11 ounces. The catch earned him the Berkley Big Bass Co-angler award of $232.