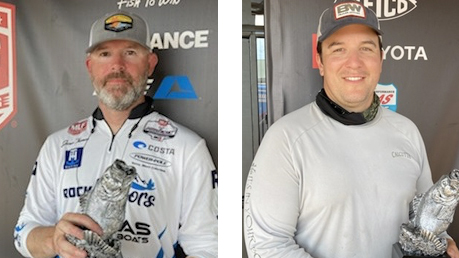 “I practiced on Wednesday and Thursday and the fish hadn’t really been biting until later in the day,” Thomas said. “We fished topwater for a couple of hours and that didn’t pan out too good, so we went a couple of places I’d had some bites on.

“We had three bites pretty quick and ended up staying on just a couple of places most of the day,” Thomas said.

Thomas said he fished the mid-lake area and Abbott’s Creek to fill his limit during the tournament. A jig and a spoon fished from 13 to 17 feet deep accounted for most of his eight keepers during the day, and most of the fish were caught from 10:30 a.m. until noon.

“It’s a big accomplishment to win against this crowd down here,” said Thomas, who also posted a BFL win on High Rock Lake in 2020. “There were a lot of great local guys in this tournament, and there’s been a lot of boat traffic and pressure on the lake, so it feels great to pull it off.”

Robert Drew of Gold Hill, North Carolina, caught a largemouth weighing 6 pounds, 12 ounces – the heaviest of the event in the Boater Division – earning him the day’s Berkley Big Bass Boater award of $675.

Smelser also caught the largest bass in the Co-angler Division, a fish weighing in at 7 pounds, 2 ounces. The catch earned him the day’s Berkley Big Bass Co-angler award of $337.