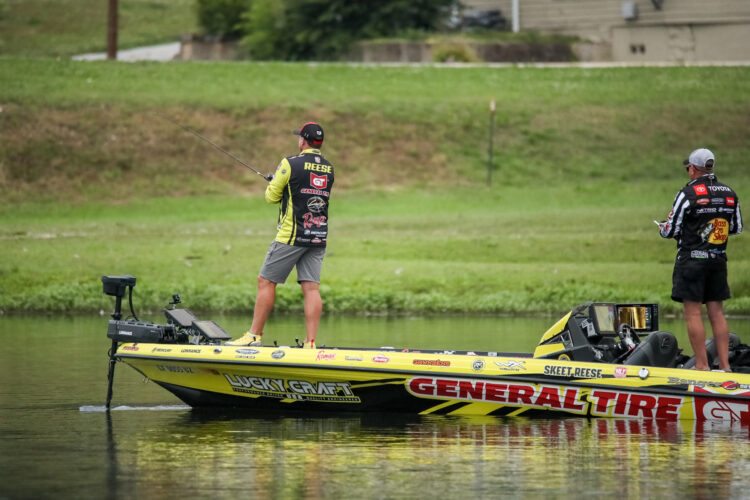 The six-day event, hosted by Town of Massena and Fish Massena, will feature 80 of the best professional anglers in the world, including bass-fishing superstars like Kevin VanDam, Edwin Evers, Jordan Lee and Jacob Wheeler, fishing for a purse of more than $805,000, including a top payout of $100,000 and valuable points in hopes of qualifying for REDCREST 2022, the Bass Pro Tour championship.

The tournament will be fished using MLF’s catch, weigh, immediate-release format, in which the anglers try to catch as much weight as they can each day, while also feeling the pressure and intensity of the SCORETRACKER® leaderboard. The tournament is being filmed for broadcast later this year on the Discovery Channel.

Although Massena and the St. Lawrence River has played host to one MLF Toyota Series tournament (2019), this event will mark the first time that the Bass Pro Tour has visited Massena and the St. Lawrence River. In the 2018 Toyota Series event, just two Bass Pro Tour anglers competed in that tournament – North Carolina’s Bryan Thrift, who finished 10th, and New Jersey’s Adrian Avena, who finished 12th.

“This is going to be such a fun event – the St. Lawrence River is just a phenomenal fishery and it’s loaded with a ton of bass in it,” said Avena, who has one career REDCREST appearance and more than $640,000 in career earnings. “The biggest thing about this event is that we’re going to see a lot of spawning smallmouth. I imagine we’ll see a lot of guys sight-fishing shallow, looking for bass on the beds.

“There are definitely certain zones of the river that are better than others,” Avena continued. “However, if a guy can get a zone to himself or find a little area that others seemed to overlook, that’s going to be key to doing well in this tournament.”

Avena said that he expects a variety of baits to be thrown by tournament anglers, including drop-shot rigs, Ned rigs, hair jigs and small swimbaits. He also said that there still could be some prespawn fish caught, and if that’s the case than he expects a jerkbait could come into play as well.

“With a 2-pound minimum, it really keeps the door open for the largemouth guys to do well, as well,” Avena said. “Traditionally in tournaments here, you need to target the smallmouth, but I feel like this time of year with the Bass Pro Tour format, it could allow a guy to really compete with strictly largemouth.

“The St. Lawrence River is widely known as a world-class smallmouth fishery, but we’re really going to show the world next week how great of a largemouth fishery it is as well,” Avena went on to say.

As part of the event, fans will also be treated to multiple community events throughout the week, hosted by Fish Massena. On Thursday, June 24, a Kick-off Concert in the Park featuring Northbound will take place at 6 p.m. at Massena Springs Park. A Kid’s Fishing Derby with local area youth fishing alongside Bass Pro Tour anglers will take place on Saturday, June 26, from 11 a.m. to 1 p.m. at Fobare’s Pond (Sandy Beach) on Coles Creek Road in Massena.

On Sunday, June 27, the Town of Massena will join the anglers at the Massena Intake Ramp for Fishin’ Church, hosted by Bass Pro Tour anglers Mark Rose and Edwin Evers along with Judy Van Kennan, Chaplain for the Massena Fire Department. A free breakfast will be provided. Also on Sunday, Louisville, New York, will host a VIP Golf Course Event featuring multiple Bass Pro Tour anglers from noon to 3 p.m. at The River Course at Louisville Landing. All activities are free and open to the public. For more information on the Stage Five Community Events hosted by Fish Massena, visit MajorLeagueFishing.com.

Anglers will take off from the Massena Intake Boat Launch Ramp, located on Route 13, in Massena, at 9 a.m. ET each day of competition. Each day’s General Tire Takeout will also be held at the Launch Ramp, beginning at 5:30 p.m. Fans are welcome to attend all takeoff and takeout ceremonies and also encouraged to follow the event online throughout the day on the MLF NOW!® live stream and SCORETRACKER® coverage at MajorLeagueFishing.com.

The General Tire Stage Five Presented by Berkley at the St. Lawrence River will feature anglers competing with a 2-pound minimum weight requirement for a bass to be deemed scorable. Minimum weights are determined individually for each competition waters that the Bass Pro Tour visits, based on the productivity, bass population and anticipated average size of fish in each fishery.

The four pros from the Tackle Warehouse Pro Circuit that will join the Bass Pro Tour to compete at the General Tire Stage Five Presented by Berkley at the St. Lawrence River are Jason Abram, Trevor Fitzgerald, Ryan Davidson and Mitch Crane. Those anglers qualified via their finishes in the fourth Pro Circuit event of the year – the Grundéns Stop 4 Presented by A.R.E. at Lake Eufaula in Eufaula, Alabama.

The 40 anglers in Group A compete in their two-day qualifying round on the St. Lawrence River on Friday and Sunday – the 40 anglers in Group B on Saturday and Monday. After each two-day qualifying round is complete, the anglers that finish in second through 20th place from both groups advance to Tuesday’s Knockout Round, while the winner of each group advances directly to Wednesday’s Championship Round. In the Knockout Round, weights are zeroed and the remaining 38 anglers compete to finish in the top 8 to advance to the Championship Round. In the final day Championship Round, weights are zeroed and the highest one-day total wins the top prize of $100,000.

The MLF NOW!® broadcast team of Chad McKee, Marty Stone and J.T. Kenney will break down the extended action on all six days of competition from 9:15 a.m. to 6 p.m. ET. MLF NOW!®  will be live streamed on MajorLeagueFishing.com and the MyOutdoorTV (MOTV) app.