Tennessee Pro Boats 21 Scorable Bass Weighing 83 Pounds, 3 Ounces to Lead Group B by Nearly 8 Pounds – Group A to Wrap Up Qualifying Round Monday 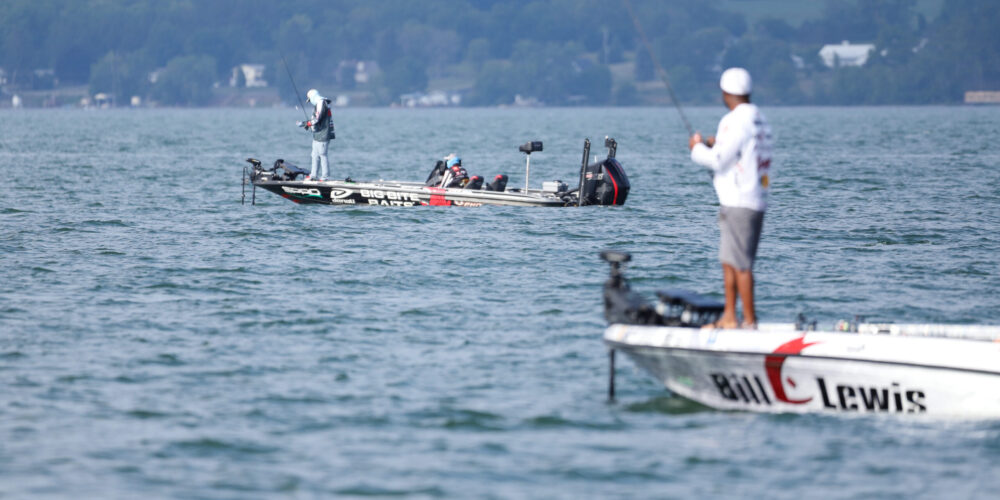 UNION SPRINGS, N.Y. – The fishing wasn’t quite as fast and furious as it was for Group A competitors on Saturday, but it was still a fantastic day on the water for Group B anglers as they opened their two-day Qualifying Round Sunday at the Bass Pro Tour Fox Rent A Car Stage Six on Cayuga Lake Presented by Googan Baits. Pro Michael Neal of Dayton, Tennessee, who just last week clinched his second straight Tackle Warehouse Pro Circuit Angler of the Year (AOY) title, kept his momentum rolling, catching 21 scorable bass weighing 83 pounds, 3 ounces, to take the lead in Group B after their first day of competition.

The six-day tournament, hosted by the Village of Union Springs, showcases 80 of the best professional anglers in the world competing for a purse of more than $805,000, including a top payout of $100,000 to the winner. The tournament is livestreamed each day at MajorLeagueFishing.com and the MOTV app, and also filmed for television broadcast later this fall on the Discovery Channel.

“I’m super happy with how the day went,” Neal said. “I caught a ton of fish roaming on the very outside break of the lake. The fish don’t have anything else to relate to out past there, besides bait, and I think that is the big key to where I’ve been fishing at – a ton of baitfish in the area. I’m looking for the bass that are chasing those balls of bait around on the edge of that drop.”

Neal credited his Lowrance ActiveTarget Live Sonar as being critical to his success. He caught his fish drop-shotting a pearl-colored Big Bite Baits Scentsation Swim Minnow, using a No. 1 Gamakatsu hook with a 3/8-ounce Denali Kovert tungsten weight. He threw the drop-shot rig on a 7-foot, 6-inch Denali Kovert rod with 8-pound Sunline Shooter fluorocarbon line.

“I feel like I’m definitely on the right pattern, catching both species of largemouth and smallmouth,” Neal said. “I expected to catch mostly smallmouth but was surprised at how many largemouth there were out here.

“It seems like everybody has found the same fish and it’s only going to get tougher and tougher because of the fishing pressure,” Neal said. “Winning the Qualifying Round and getting that automatic berth into the Championship Round is a big deal this week, more so than normal. I’m trying to focus on getting to that point, but it is not going to be an easy task. I’m looking forward to getting back out there.”

The Top 20 pros in Group B after Day 1 of their Qualifying Round on Cayuga Lake are:

As a part of the event on Monday, Aug. 8 from 8-10 a.m., the MLF Fisheries Management Division (FMD) will participate in a clean-up event at Frontenac Park – the FMD Costa Clean Water Matters Program.  MLF pro anglers and volunteers will walk the park and shorelines to clean up trash and debris from the shores of Cayuga Lake.

On Championship Thursday, Aug. 11, from 4:30-6 p.m. MLF will host a Celebration Event for fans of all ages, inviting fans to come out and celebrate with the professional anglers from the Bass Pro Tour as they crown the champion of the Fox Rent A Car Stage Six on Cayuga Lake Presented by Googan Baits. Before the celebration, a MLF watch party starts at 1:30 p.m., and the first 50 middle school or high school anglers in attendance will receive a free Abu Garcia rod and reel combo valued at $100. The final 10 Championship Round Bass Pro Tour anglers will be on hand at the trophy celebration to meet and greet fans, sign autographs, and take selfies.

The Fox Rent A Car Stage Six on Cayuga Lake Presented by Googan Baits features anglers competing with a 2-pound minimum weight requirement for a bass to be deemed scorable. Minimum weights are determined individually for each competition waters that the Bass Pro Tour visits, based on the productivity, bass population and anticipated average size of fish in each fishery.