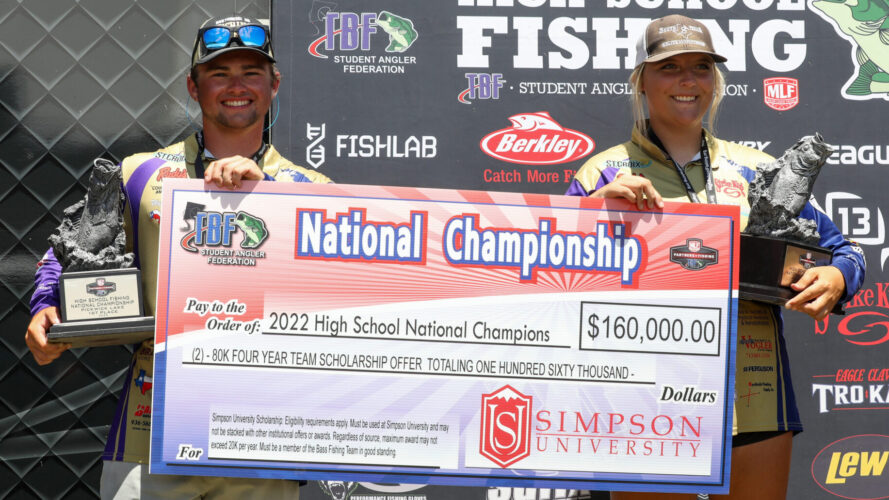 The duo’s three-day total of nine bass weighing 39 pounds, 9 ounces, earned them the victory by a 5-pound, 5-ounce margin over the runner-up, New Hampshire’s Keene High School, and earned the duo thousands of dollars in prizes and scholarship offers – including a four-year $80,000 offer to California’s Simpson University and a four-year $100,000 offer to attend Kentucky Christian University. The duo also now advances to the 2022 Toyota Series Championship, held Nov. 3-5 on Lake Guntersville in Guntersville, Alabama, to compete as co-anglers and a shot at the top prize of a new Phoenix 518 Pro boat with a 115-horsepower Mercury outboard.

Going into the third and final day of competition, Clepper and Ford held just a 1-ounce lead on their competition.

“I was nervous at takeoff,” Clepper said. “I thought we were going to get gapped by everybody, but when we got to our spot there was only one other boat there.”

Leaning on sage advice from their captain, Julian Clepper — Fallon’s father — the team weathered wracked nerves to boat a 12-pound bag on the final day for the win.

“We stayed on our juice the entire time today,” Ford said. “That was the only spot we consistently caught fish over 2 pounds, so we figured we would try to win it all and stay there all day.”

It didn’t take long for the team to launch themselves into serious contention for the crown on the final day.

At 6:40 a.m., Ford plunged a Zoom Trick Worm to the bottom of Pickwick Lake ledge on a shaky head jig. Its hook connected with a Tennessee River stud, and seconds later, a 7-pound, 8-ounce largemouth crashed into the net held by his teammate’s father.

“I was thinking that we had been here before,” said Ford, a soft-spoken football tight end who kept his composure throughout the event. “I knew if we got it in the boat that we might have a shot.”

The fish was the largest landed in a tournament featuring 236 boats competing in the 2022 High School Fishing National Championship. Combined with a pair of quality keepers from teammate Fallon Clepper, the Pickwick kicker was enough to outpace the pack and land the duo high school fishing’s highest honor.

In the process, Clepper, who started fishing competitively with her father at 11 years old, became the first female angler to ever win the High School Bass Fishing National Championship.

“I want to see more girls out here getting in it,” she said. “Just because a boy says you can’t do it doesn’t mean you can’t. Just keep after them.”

In a tournament fought out mostly under bluebird skies, slow current and brutal summer heat, Clepper and Ford’s single honey hole was productive enough to get the job done.

“When we found the spot in practice, we drove over it with the graphs and saw a really big school of fish,” Ford said. “It was like something we had never seen before.”

Clepper and Ford began fishing together when their parents, who were childhood friends, reconnected at a meet-the-teacher event during their freshman year.

“I asked him if he was going to fish,” Clepper said. “He said ‘yes’ and that he didn’t have a partner, so we ended up together ever since then.”

Three years later, the two fishing-forged friends stood together on stage with one of bass fishing’s most famous rivers as a backdrop. At their feet lay massive checks and scholarship offers. The two most coveted trophies in high school bass fishing were hoisted above their heads. And in the crowd, a pair of overjoyed parents cheered feverishly for their kids.

“It doesn’t even seem real right now,” Clepper said. “I feel like I am in a dream. I have always dreamed of this day and it finally came true.”

Complete results for the entire field can be found at HighSchoolFishing.org.