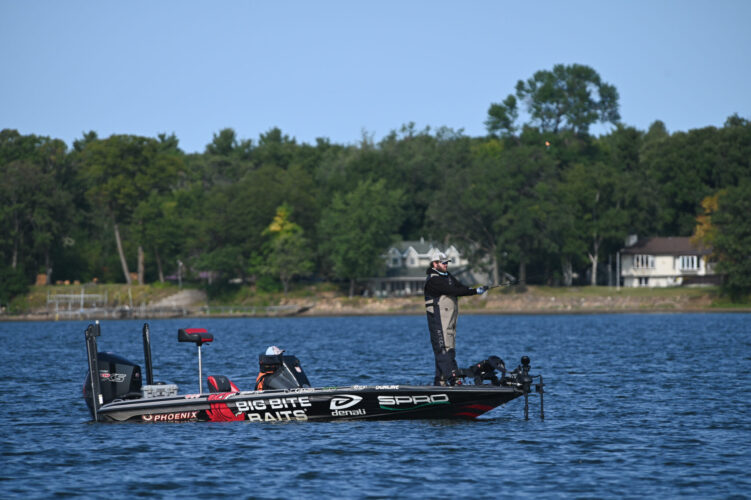 ONAMIA, Minn. – Pro Michael Neal of Dayton, Tennessee, caught 20 scorable smallmouth bass weighing 77 pounds, 2 ounces to win the Knockout Round and advance to the final day of competition at the Bass Pro Tour Bally Bet Stage Seven on Mille Lacs Lake Presented by Minn Kota in Onamia, Minnesota. The final 10 anglers are now set, and competition will resume Thursday morning with the Championship Round. Weights are zeroed, and the angler that catches the most weight will win the top prize of $100,000.

The six-day tournament, hosted by the Mille Lacs Band of Ojibwe, showcases 80 of the best professional anglers in the world competing for a purse of more than $805,000, including a top payout of $100,000 to the winner. The tournament is live-streamed each day at MajorLeagueFishing.com and the MOTV app, and also filmed for television broadcast later this fall on the Discovery Channel.

The Top 8 pros from Wednesday’s Knockout Round that will compete in Thursday’s Championship Round on Mille Lacs Lake are:

“I don’t know that I’ve ever won a Knockout Round before,” Neal said. “It’s not necessarily the round that you want to win, but I can’t complain either way. I laid off my fish pretty quick into the second period and there is a lot more there, but who knows what the weather is going to do tomorrow.

“I’ve got one main area up on the north end of the lake that I’m catching all my fish,” Neal said. “It’s really been anywhere from 10 to 16 feet, pretty much where you can find a mixture of some grass and one or two rocks mixed in. It’s a very specific cast and you’ve got to hit it. And with the wind, that was kind of a challenge today.”

Neal battled through the winds, throwing a couple of different baits. He mentioned his key bait this week has been a Big Bite Baits SoMolly finesse worm, fished on a drop-shot rig with a 10-pound test Sunline SX1 braided line and  8-pound test Sunline Shooter fluorocarbon line and a 1/0 Gamakatsu hook.

“Tomorrow, it looks like we’re going to have the same kind weather, as far as the wind goes, and maybe even some rain,” Neal said. “I don’t know if that will push more fish to me or if it will scatter them out.

“Everybody is back to zero, all back to square one again, and it’s going to be a shootout,” Neal went on to say. “There are some great fishermen in this top 10, no doubt. I’m looking for somewhere around that 80-to-90-pound range probably to try to win tomorrow. Maybe even 100. I feel like I could have gotten to that mark today if I needed to, but tomorrow is going to be different. I’m just ready to come back out here. It’s been a lot of fun this week. We’ve caught a lot of fish, some big fish, and we’ve just got to do it one more day.”

Rounding out the top 40 finishers on Mille Lacs Lake were:

The final 10 anglers will launch on Championship Thursday at 7:30 a.m. CT from Eddy’s Resort, located at 41334 Shakopee Lake Road in Onamia. Each day’s General Tire Takeout will be held at the Resort, beginning at 4 p.m. Fans are welcome to attend all launch and takeout events and also encouraged to follow the event online throughout the day on the MLF NOW! live stream and SCORETRACKER® coverage at MajorLeagueFishing.com.

Also on Championship Thursday, Sept. 15, from 4:30-6 p.m. MLF will host a Celebration Event for fans of all ages, inviting fans to come out and celebrate with the professional anglers from the Bass Pro Tour as they crown the champion of the Bally Bet Stage Seven on Mille Lacs Lake Presented by Minn Kota. The first 50 youth anglers 10 and under in attendance will receive a free Pure Fishing Shakespeare Kid’s Rod and Reel combo. The final 10 Championship Round Bass Pro Tour anglers will be on hand at the trophy celebration to meet and greet fans, sign autographs, and take selfies.

The Bally Bet Stage Seven on Mille Lacs Lake Presented by Minn Kota features anglers competing with a 2-pound minimum weight requirement for a bass to be deemed scorable. Minimum weights are determined individually for each competition waters that the Bass Pro Tour visits, based on the productivity, bass population and anticipated average size of fish in each fishery.

The MLF NOW! broadcast team of Chad McKee, Marty Stone and J.T. Kenney will break down the extended action on Championship Thursday from 7:45 a.m. to 4:30 p.m. CT. MLF NOW! will be live streamed on MajorLeagueFishing.com and the MyOutdoorTV (MOTV) app.

Television coverage of the Bally Bet Stage Seven on Mille Lacs Lake Presented by Minn Kota will premiere as a two-hour episode at 7 a.m. ET, on Saturday, Nov. 19 on Discovery Channel. New MLF episodes premiere each Saturday morning on Discovery Channel, with additional re-airings on Outdoor Channel. Each two-hour long reality-based episode goes in-depth to break down each day of tournament competition.