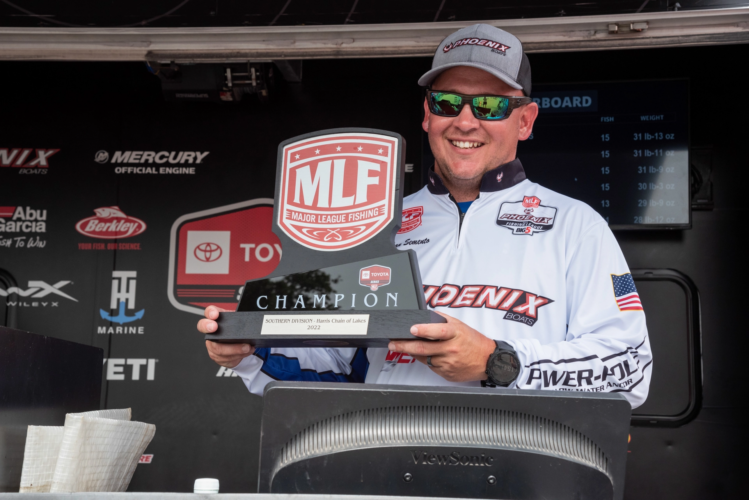 LEESBURG, Fla. – Despite only weighing in four bass totaling 9 pounds, 15 ounces  that had him buried in 119th place after Day 1, pro angler Jonathan Semento of Okahumpka, Florida, rallied on the final two days – including a 25-pound, 3-ounce final-day limit – to win the Toyota Series Presented by A.R.E. at the Harris Chain of Lakes and win the top payout of $80,500, including the lucrative $35,000 Phoenix MLF Contingency Bonus. Semento’s three-day total of 14 bass weighing 60-1 earned him the victory by a 3-pound, 12-ounce margin over second place pro Andrew Ready of Auburndale, Florida, who caught 15 bass weighing 56-5 to finish second and earn $17,000.

The three-day bass fishing tournament, hosted by Visit Lake County, was the third and final event of the regular season for the Toyota Series Southern Division.

“It feels great to come back from so far and win like this,” Semento told MLF reporter Rob Newell. “I was pretty frustrated that first day. But I knew those big fish were offshore and I just needed to relocate them. On the second day, I moved around a lot more and found them about 200 yards from where I caught them two weeks ago.

“What made it possible to relocate them was the fact that I had the whole lake to myself,” he added. “If 80 boats went over there every day, I wouldn’t have been able to hop around and fish as freely. Having no pressure over there was definitely a big key.”

The lake that Semento fished in was Lake Griffin, which was avoided by many tournament competitors after recent hydrilla spraying, algae blooms and rising water temperatures had colored the water into a hue that resembled pea soup. Despite the tougher conditions, Semento, a resident of nearby Okahumpka, had placed second in a local tournament after fishing in Griffin a couple of weeks ago and decided that he was going to stick with the lake for this event.

Semento’s key area in Lake Griffin was a 100-yard stretch of clumpy eelgrass in 4 to 6 feet of water. To do his work, Semento utilized two ChatterBaits: one was a 3/8-ounce golden shiner color for shallower 4-foot clumps and the other was a ½-ounce chartreuse and white model for deeper clumps in 6 feet. He trailed both with Yamamoto Zako trailers in matching colors to the ChatterBaits. He fished both on 15-pound-test  P-Line.

“Sometimes with tournament fishing, it just comes down to being stubborn enough until it pays off,” Semento said. “Some people might think I was crazy to go right back over to Griffin after catching 9 pounds there the first day. But this fishing game can get personal, and it comes down to knowing you are doing the right thing even when your weigh-in ticket doesn’t reflect it the first day. I knew in my heart what lived there and I was determined to prove it.”

The Top 10 pros on the Harris Chain of Lakes finished:

The Top 10 Strike King co-anglers on the Harris Chain of Lakes finished:

The Day 1 Berkley Big Bass $150 award winner in the Strike King Co-angler division was Justin Thompson of Marshall, Virginia, with an 8-pound, 15-ounce bass, while the Day 2 $150 award went to Hunter Rudd of Leesburg, Georgia, who weighed in a 7-pound, 15-ounce largemouth.

The next event for Toyota Series anglers will take place June 1-3 – the Toyota Series Presented by A.R.E. at the California Delta in Bethel Island, California. For a complete schedule, visit MajorLeagueFishing.com.