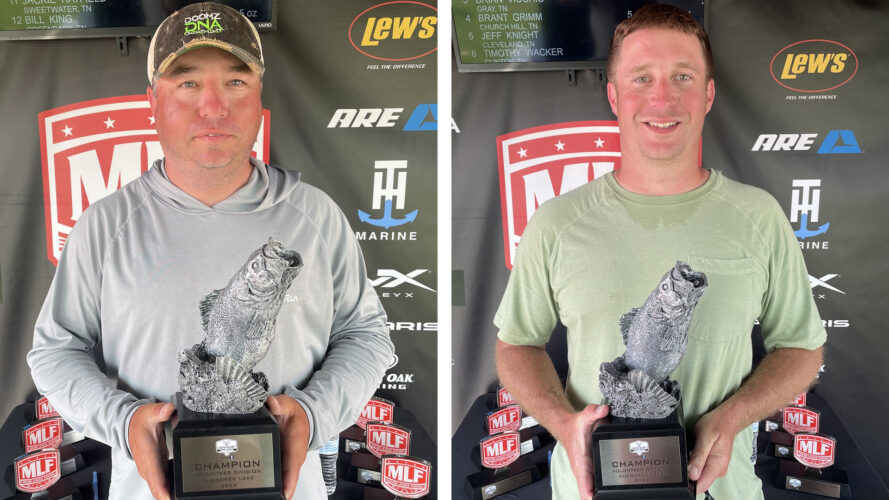 “I had a late boat draw, so I started pretty close to takeoff because I didn’t really have any place specific to go,” Drinnon said. “I just had a simple shad spawn pattern I was running. I just ran as much of that water as quickly as I could and had all of my weight by 8 o’clock.”

Drinnon said the early catch didn’t give him much comfort, because he didn’t cull a fish after 8 a.m. He said he caught the early bass on a homemade jig by throwing toward the bank in less than three feet of water and retrieving it back steadily. Drinnon said he caught 15-20 bass during the course of the day, including one he lost. All of the bass during the tournament were keepers, except one.

“Overall, it was a great day, and I’m really blessed,” said Drinnon, who had three BFL wins in co-angler competition before switching to the boater side. “I knew how good the bite was, and there were a few others who figured out the bite as well, because the weights were really tight.

“I was really nervous about it, to be honest,” Drinnon said. “I felt I really needed the one that I had lost. I thought that was going to cost me, but it ended up working out.”

Vicchio had a largemouth that weighed 5 pounds, 14 ounces that was the heaviest of the event in the Boater Division and earned the day’s Berkley Big Bass Boater award of $725.

Denvelle Ketron of Kingsport, Tennessee, caught the largest bass in the Co-angler Division, a fish weighing in at 4 pounds, 15 ounces. The catch earned him the day’s Berkley Big Bass Co-angler award of $345.