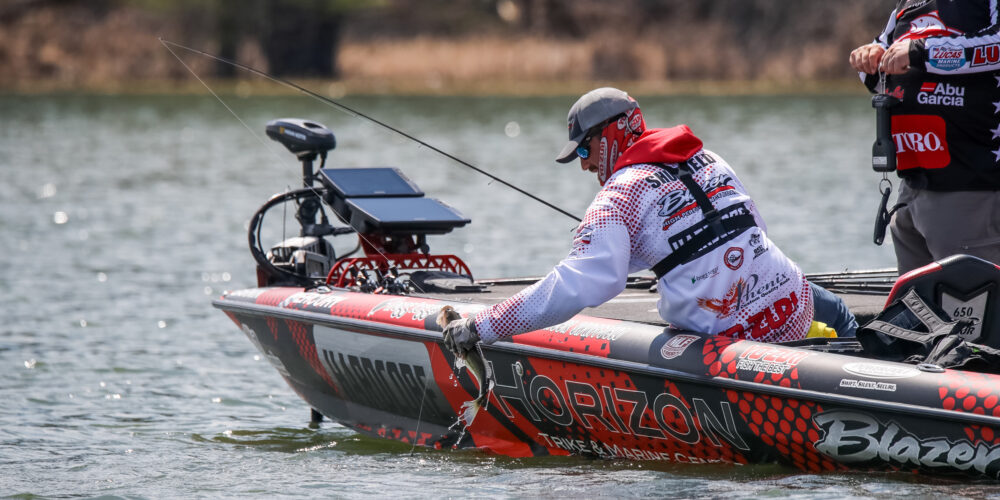 JASPER, Texas – Fishing in his first career Major League Fishing (MLF) Bass Pro Tour event, Pro Circuit angler Spencer Shuffield of Hot Springs, Arkansas wasted no time in making an immediate impact. Shuffield boated nine scoreable bass Sunday totaling 29 pounds, 12 ounces to jump out to the early lead in Group A’s Qualifying Day 1 at the Toro Stage One at Sam Rayburn Reservoir Presented by Power-Pole. The six-day competition, which awards a top cash prize of $100,000 to the winner, is being live-streamed online and filmed for television broadcast on the Discovery Channel and the Outdoor Channel later this year.

Just 1 ounce behind Shuffield in second place on the SCORETRACKER® leaderboard is a red-hot Dustin Connell, of Clanton, Alabama, the reigning REDCREST champion who caught 10 bass totaling 29-11. Bass-fishing superstar Kevin VanDam of Kalamazoo, Michigan, sits in third place, just 2 pounds back of Shuffield with 10 bass weighing 27-12.

“I’m really excited about it,” Shuffield said when asked about leading after Qualifying Day 1 in his first Bass Pro Tour event. “I got on a little something today that I didn’t know was happening, but it’s a way that I really like to catch them. Everything that I’m catching is postspawn, and the way things are looking I think they’re just going to continue coming to me, more and more.”

Shuffield said that he caught all of his fish on two different baits Sunday – a Yo-Zuri 3DB Jerkbait 110 Deep and a drop-shot rig.

Like Shuffield, most of the anglers near the top of SCORETRACKER® were also throwing a jerkbait at certain points of the day, including Connell and VanDam.

“I caught a lot of fish on a jerkbait today,” Connell said. “These fish are kind of staging up right now. It got pretty slow for me later in the day, so I was kind of bouncing around and practicing in the third period. I found a little zone that I like, so I’ve just been trying to expand on that a little bit.”

VanDam spent a lot of the day looking for schools of bass that were grouped up but didn’t have any luck, and spent the day picking off stragglers.

“I wasn’t really sure how it was going to happen today, but it ended up being a solid day,” VanDam said. “I caught some good fish in practice, but I couldn’t find the big concentrations of them, and that’s the way it was today. One here, one there. I caught a few good ones and just mixed it up to keep myself in the hunt all day long.”

VanDam credited a Pro Blue-colored Strike King KVD jerkbait as being his key bait for most of the day, but he did also boat a few scoreable bass with a gold-colored jerkbait as well.

“I’m just going to grind it out and fish the migration routes where these fish are coming into these big spawning basins – fishing points and ditches.”

The top 20 pros in Group A after Qualifying Day 1 on Sam Rayburn Reservoir are:

Overall, there were 155 bass weighing 439 pounds caught by 36 pros on Sunday, which included one 9-pounder, one 8-pounder, one 7-pounder and four 6-pounders caught from Sam Rayburn.

Connell won Sunday’s $1,000 Berkley Big Bass Award, weighing in a 9-pound, 5-ounce largemouth on the jerkbait during Period 2. Berkley will award $1,000 to the angler that weighs the biggest bass each day, and a $3,000 bonus to the angler who weighs the largest bass of the tournament.

The 40 Anglers in Group A compete in their two-day qualifying round on Sunday and Tuesday – the 40 anglers in Group B on Monday and Wednesday. After each two-day qualifying round is complete, the anglers that finish in second through 20th place from both groups advance to Thursday’s Knockout Round, while the winner of each group advances directly to Friday’s Championship Round. In the Knockout Round, weights are zeroed and the remaining 38 anglers compete to finish in the top 8 to advance to the Championship Round. On the final day Championship Round, weights are zeroed and the highest one-day total wins. Full breakdown of the format can be found at MajorLeagueFishing.com.