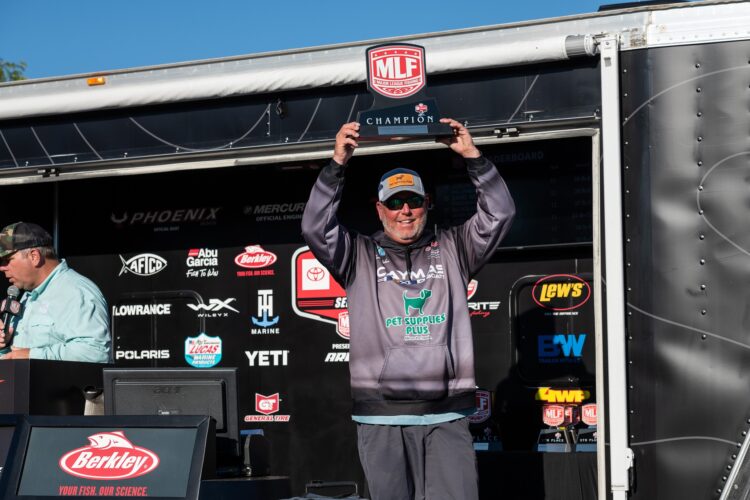 MASSENA, N.Y. – Pro Spike Stoker of Cisco, Texas, brought a five-bass limit to the scale Saturday weighing 20 pounds, 13 ounces to win the Toyota Series Presented by A.R.E. at the St. Lawrence River Presented by Boatlogix and earn the top payout of $40,555. Over the three days of competition Stoker weighed in 15 bass totaling 64-12 to earn the win by a 2-pound, 4-ounce margin over North Carolina’s Todd Walters, who finished second with a three-day total of 62-8, good for $15,134.

The three-day tournament, hosted by the Town of Massena, was the third and final event of the season for the Toyota Series Northern Division, and the last regular season event before the Toyota Series Championship next month.

“I can’t believe it,” said Stoker, who was fishing in his inaugural season as a pro in the Toyota Series. “There’s been a lot of times I’ve been close; something terrible happens and it kills me. The second day, the trolling motor not working, I thought that was it.”

Stoker admits he “said a few bad words” that day, but he also was able to regroup, get the trolling motor working and get back to fishing his main area – an area that just happened to have the right quality.

“Every day in practice, I idled a different 3- to 4-mile stretch,” Stoker said. “Every day I found areas that you could catch 17 to 19 pounds, but that one stretch, every time I went there, it was 22 to 23 pounds.”

Like most everyone else, a drop-shot with a Berkley PowerBait MaxScent Flat Worm played a big role, but the real key for Stoker was a Carolina-rigged Zoom Speed Craw. He’d cast it out on top the shoal and slowly let the current pull it along as it pulled the boat with it. Often, when he caught a fish, multiple more would be with it when he reeled it in, and he could then drop down the drop-shot on them to catch one or two more.

On Day 2, the brutal wind and lack of a trolling motor made it near impossible for Stoker to drift his spot, as the wind would push him up on top of the shoal instead of along it. Once Stoker sat and settled himself down, that ended up being the turning point for his tournament, because while many guys let the wind alone ruin their days, he salvaged his to get him past the cut and fishing on Day 3. And, with hardly any wind and clear skies Saturday, everything set up perfectly for the Texas rookie to pull off the biggest win of his career.

“I really didn’t think I had enough any day,” Stoker said. “I thought I blew it today because the conditions were so good. Well, all I know is this feels good.”

The Top 10 pros on the St. Lawrence River finished:

Anderson took home an extra $1,000 as the highest finishing Phoenix MLF Bonus member. Boaters are eligible to win up to an extra $35,000 per event in each Toyota Series tournament if all requirements are met. More information on the Phoenix MLF Bonus contingency program can be found at PhoenixBassBoats.com.

Gelles was the Berkley Big Bass $150 award winner in the Strike King co-angler division, Thursday, with a 6-pound, 14-ounce bass, while the Day 2 $150 award went to Lazarus Durham of Dumfries, Virginia, with a 5-pound, 7-ounce fish.

The next event for Toyota Series anglers will be the final event of the season – the Toyota Series Championship, Nov. 3-5 on Lake Guntersville in Guntersville, Alabama, and hosted by Marshall County Tourism and Sports. For a complete schedule, visit MajorLeagueFishing.com.

The 2022 Toyota Series Presented by A.R.E. consisted of six divisions – Central, Northern, Plains Presented by Outlaw Ordnance, Southern, Southwestern Presented by Outlaw Ordnance and Western – each holding three regular-season events, along with the International and Wild Card divisions. Anglers who fished in any of the six divisions and finished in the top 25 – or the top 12 from the Wild Card division – now qualify for the no-entry-fee Toyota Series Presented by A.R.E. Championship for a shot at winning up to $235,000 cash. The winning Strike King co-angler at the championship earns a new Phoenix 518 Pro bass boat with a 115-horsepower Mercury outboard.