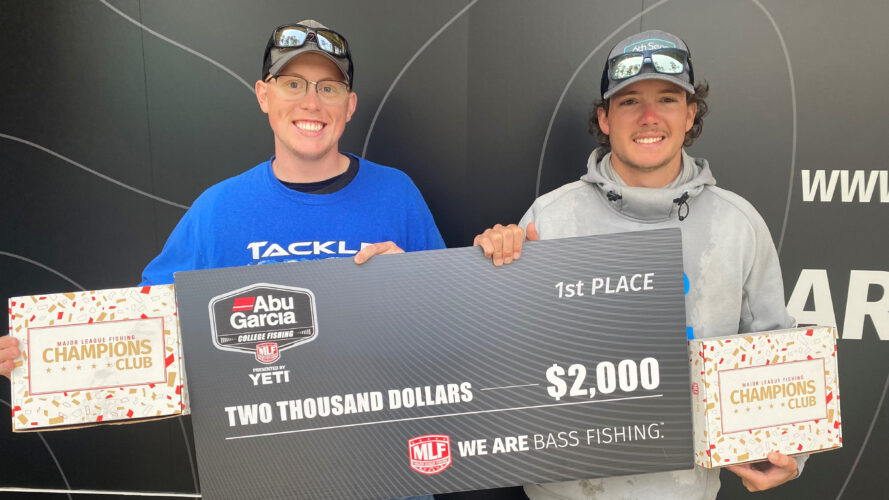 “I would say we had most of our weight – probably 23 pounds – in the first 20 minutes,” McLarry said. “We made a 20-minute run up-lake and started off in a deeper channel swing cranking a Wild Shad-colored 6th Sense Cloud 9 Series Crankbait. Then the bite just died off. So, at noon we decided to go around and scan some offshore timber.”

The team targeted bass with a 6th Sense Provoke 106 Sinking Jerkbait and culled up with bigger bass twice with that approach. McLarry said they also caught a number of fish on a Carolina rig, but none of those fish added to their final weight. McLarry added that they caught 25 keepers during the course of the day and that their biggest bass of the day, an 8½-pounder, fell for the C25 crankbait.

“We’ve worked really hard to win a college tournament,” McLarry said. “This is my third year and Jared’s first. I’ve been on Rayburn a few times, and it’s always kicked my butt, so it felt really good to come out here and get a win on a lake that’s kicked my butt so many times.”

MLF College Fishing teams compete in three regular-season tournaments in one of five conferences – Central, Northern, Southern, Southeastern and Western. The Top 10 teams from each division’s three regular-season tournaments and the Top 20 teams from the annual Abu Garcia College Fishing Open will advance to the following season’s National Championship. The 2022 MLF Abu Garcia College Fishing Presented by YETI National Championship Presented by Lowrance will be held on Fort Gibson Lake in Wagoner, Oklahoma, March 29-31, and is hosted by the Wagoner Area Chamber of Commerce.