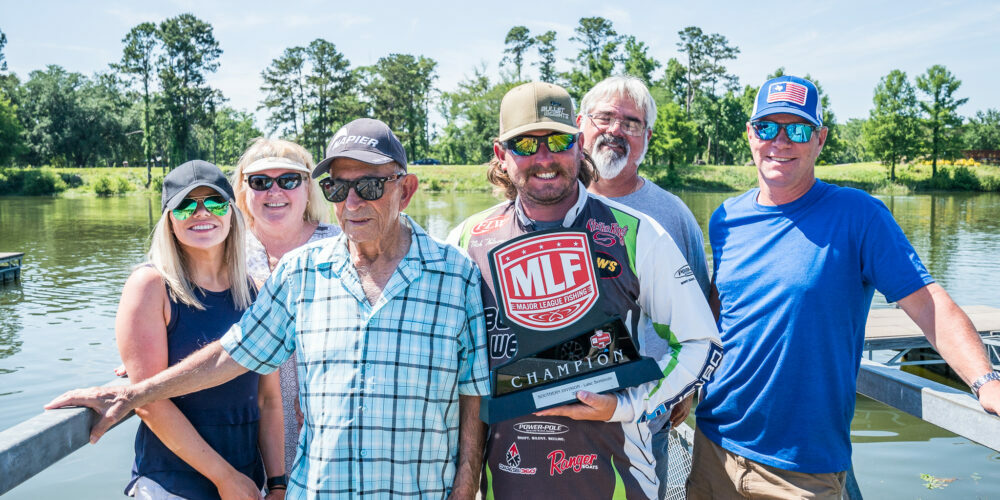 BAINBRIDGE, Ga. – Toyota Series angler Nick Thliveros of St. Augustine, Florida, brought a five-bass limit to the scale Saturday weighing 21 pounds, 13 ounces to win the three-day Toyota Series Presented by A.R.E. at Lake Seminole in Bainbridge, Georgia. Thliveros’ three-day total of 15 bass weighing 62-11 earned him the win by a 1-pound, 12-ounce margin over second-place angler Matt Baty of Bainbridge, Georgia, and earned Thliveros the top payout of $37,809 in the third and final tournament of the 2021 Toyota Series Southern Division.

Settling down in Spring Creek, Thliveros said he fished one 50-yard stretch all week.

“It’s something I’ve had some previous knowledge on but I’ve never really been here at the right time for it,” said Thliveros. “I’ve never been here far enough in the postspawn to make those fish get in the deeper water.

“It’s basically a sand spot with hydrilla on the edge. The water’s about 10-foot deep around it and the sand is in 15 feet of water. It’s a depression and today they were on the sand.”

The unique aspect of his area was that Thliveros was essentially fishing side-by-side the fourth-place finisher Braxton Clements all three days. The two fished different areas all week, though the areas were nearly a cast apart.

“I have to give a huge shoutout to Braxton,” Thliveros said. “You got to watch him because that boy can fish and he is first class. We were 40 yards apart every day. I didn’t know him, but that’s a good man right there. We worked together – he had his hole, I had mine. We’d congratulate each other on catching fish all week and in this sport you don’t see that often, so to be a part of it is amazing.”

Thliveros said dissecting the grass and sand was a repetitive and meticulous process the entire week. Getting bites early in the day helped to reinforce the fact that the tiny spot still had fish and gave him the confidence to keep grinding.

“I’ve never been in a situation where you can go to one spot and just catch ‘em all three days,” he said. “Today, I could see them on my down imaging and I backed off and it was awesome.”

Thliveros kept it simple and a bit old school with two worms of choice – a Strike King Cut-R Worm or a Strike King Anaconda worm rigged on a 3/16- or ¼-ounce Bullet Weights Tactical Tungsten weight. Though he tried other baits, Thliveros said the worm was his primary producer.

“My dad has, you know, 35 years in [tournament fishing on a worm], so I had a pretty good teacher,” he said. “He taught me how to drag a worm and that’s what it took this week.”

With his family cheering him on from the crowd, Thliveros was emotional on stage when his name was announced as champion.

“It’s been two years since my last win,” he said. “I won Okeechobee [2019] and I hadn’t cashed a check since the end of that year, but I came back on this one. I’ve got to thank my family and sponsors, because without y’all I wouldn’t be here. I’m speechless.”

Pro Matt Baty of Bainbridge, Georgia, took home an extra $1,000 as the highest finishing Phoenix MLF5 Bonus member. Boaters are eligible to win up to an extra $35,000 per event in each Toyota Series tournament if all requirements are met. More information on the Phoenix MLF5 Bonus contingency program can be found at PhoenixBassBoats.com.

The Toyota Series at Lake Seminole was hosted by the Bainbridge Convention and Visitors Bureau. It was the third and final regular-season tournament in 2021 for Southern Division anglers. The next event for Toyota Series anglers will take place May 13-15 – the Toyota Series at the California Delta in Oakley, California. For a complete schedule, visit MajorLeagueFishing.com.

The 2021 Toyota Series presented by A.R.E. consists of six divisions – Central, Northern, Plains, Southern, Southwestern and Western – each holding three regular-season events, along with the International division. Anglers who fish all three qualifiers in any of the eight divisions and finish in the top 25 will qualify for the no-entry-fee Toyota Series Presented by A.R.E. Championship for a shot at winning $235,000 cash, including a $35,000 Phoenix MLF5 Bonus for qualified anglers. The winning Strike King co-angler at the championship earns a new Phoenix 518 Pro bass boat with a 115-horsepower Mercury outboard.