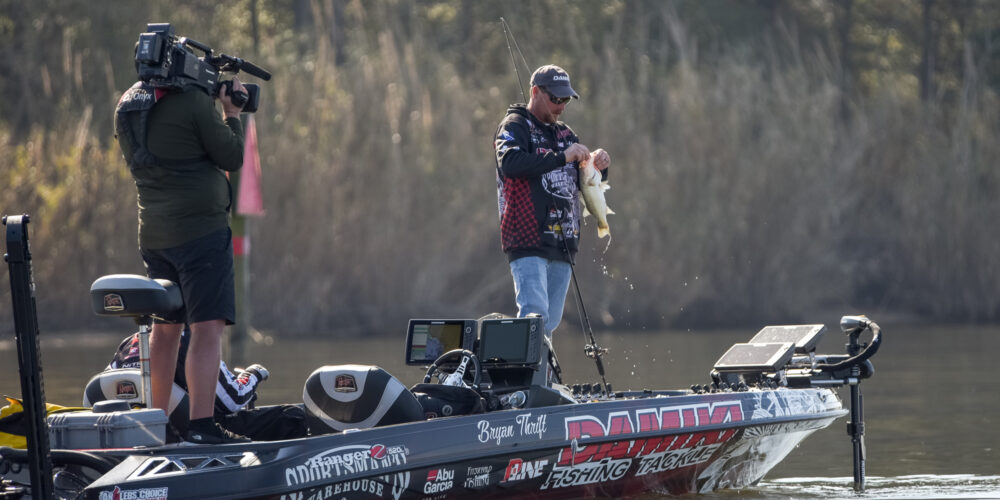 EUFAULA, Ala. – The fishing improved over Wednesday, but it was still not an easy day for tournament competitors Thursday on Lake Eufaula. Unless your name was Bryan Thrift. Thrift weighed in 14 bass totaling 40 pounds, 8 ounces Thursday to easily cruise to the win in the Knockout Round (Group B) on Day 4 at REDCREST 2021, the Bass Pro Tour championship at Lake Eufaula in Eufaula, Alabama. The five-day competition featured a field of 40 of the best anglers in the world from the Major League Fishing (MLF) Bass Pro Tour competing for a top cash prize of $300,000.

“I’ve made it to the Championship Round of my very first REDCREST, and I am beyond excited,” Thrift said. “I feel like I’m on enough fish right now to at least have a chance. I’m a little nervous – a lot of people watched me catch them this morning off of my one place, and that’s where I’ve caught most of my fish this week. So, I’m really hoping that I can still get on it tomorrow. Hopefully, there are still a few there, and if they are then I think we have a chance.”

Despite four straight days of sunny skies and warmer temperatures that had many predicting the fish would be heading to the bank, Thrift has done the majority of his fishing offshore with a swimbait and a shaky-head rig.

“I know they’re headed to the bank, any time now,” Thrift said. “I went in one pocket today and seen six or seven bass cruising around – no big ones yet – but buck bass up there looking. So, I definitely think they’re coming to the bank soon, but they’re still not quite right yet. I’ll probably look again tomorrow and see what happens. I have a lot of stuff to run tomorrow. I have some stuff left that I didn’t fish today that hopefully could be good, but you never know.”

Michael Neal continued his last-minute REDCREST heroics Thursday, matching what he started earlier this week. After catching a 4-pounder with just 50 seconds left in the final period to advance from Tuesday’s Qualifying Round, Neal caught two 3½-pounders in the final six minutes Thursday to jump from sixth place to third place and advance to the final day.

“What a day. I don’t know how I keep putting myself in this position – right on the cutline, every time,” Neal said. “It’s getting kind of old. It’s fun, don’t get me wrong. But I’d like to have a strong start for once. Who knows, maybe tomorrow will be the day.

“I think I stuck with the spinnerbait a little too long today,” Neal continued. “This morning they were biting it really good, and then the sun got up and it was slick calm, I should have went to the jerkbait a lot earlier. It’s a lesson learned for tomorrow, and I’m very fortunate to make it. Everything goes back to zero, and now it’s anyone’s ballgame.”

The top five pros that made the cut and will advance to Championship Friday on Lake Eufaula are:

The five pros eliminated from competition Thursday are:

Overall, there were 59 bass weighing 189 pounds, 3 ounces caught by the 10 pros in Group B Thursday.

Thrift and DeFoe split Thursday’s $1,000 Berkley Big Bass Award, each weighing in a 5-pound, 8-ounce largemouth. Berkley awards $1,000 to the angler that weighs the biggest bass each day, and a $7,000 bonus to the angler who weighs the largest bass of the tournament.

At REDCREST 2021, the full field of anglers competed in the two-day Qualifying Round on Days 1 (Monday) and 2 (Tuesday) of the event. The field was cut to just the top 20 based on two-day total cumulative weight. The remaining 20 anglers were split into two groups for the Knockout Round – 10 (Group A) competed on Day 3 (Wednesday) and 10 (Group B) competed on Day 4 (Thursday). The top five anglers from each group based on total single-day weight now advance to the Championship Round – the fifth and final day of competition (Friday) where weights are zeroed and the angler that catches the highest total weight on the final day will be crowned the REDCREST 2021 champion.

The 10 anglers that will compete in the final Championship Round on Lake Eufaula on Friday are:

The final 10 anglers in the competition have a combined four FLW Cup titles, three Bassmaster Classic wins, and 10 Angler of the Year (AOY) titles.

Attendance is limited to competing anglers, essential staff and media covering the event only. Fans are encouraged to follow the event online through the MLF NOW!® live stream and SCORETRACKER® coverage at MajorLeagueFishing.com.

The 2020 Bass Pro Tour featured a field of 80 of the top professional anglers in the world competing in a COVID-shortened five regular-season tournaments around the country. The top 40 anglers in the AOY standings after the five events qualified to compete in Bass Pro Shops REDCREST 2021 presented by Old Wisconsin Sausage.

Television coverage of REDCREST 2021 Presented by Old Wisconsin Sausage, the Bass Pro Tour championship, will be showcased across two two-hour episodes, premiering at 7 a.m. ET, July 3 on the Discovery Channel. A one-hour special episode of MLF Inside the REDCREST will premiere at 2 p.m. ET, Sunday, July 18 on CBS. New MLF episodes premiere each Saturday morning on the Discovery Channel, with additional re-airings on the Outdoor Channel and the Sportsman Channel. Each two-hour long reality-based episode goes in-depth to break down each day of competition.