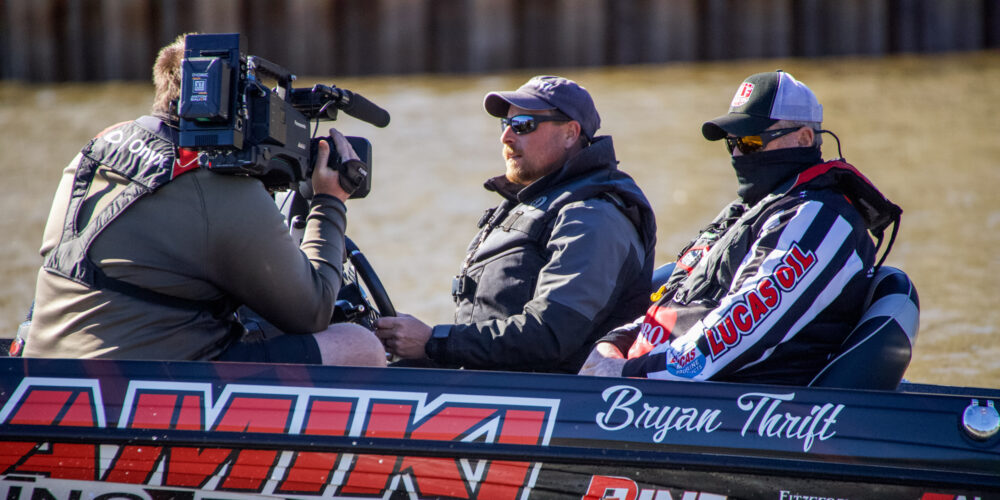 EUFAULA, Ala. – Pro Bryan Thrift of Shelby, North Carolina, weighed in 15 bass totaling 50 pounds, 4 ounces over the first two days of competition to win the two-day Qualifying Round at REDCREST 2021, the Bass Pro Tour championship at Lake Eufaula in Eufaula, Alabama. The five-day competition features a field of 40 of the best anglers in the world from the Major League Fishing (MLF) Bass Pro Tour competing for a top cash prize of $300,000.

Lake Eufaula was a bit tougher for anglers on Tuesday, however quite a few anglers, including Thrift, spent most of the day practicing and searching for new areas to fish in during the Knockout Round.

“I didn’t catch a lot of fish today – only two scorable bass – but it was a fun day because I eliminated a lot of water,” Thrift said. “That’s pretty much all we got accomplished today, but that’s just a part of it. Sometimes that’s almost as good as finding the winning hole, because now I’ve got a great idea of what not to do when I get back out there, and that’s definitely a plus.

“It feels great to be leading in my very first REDCREST, but I’ve still got some work to do,” Thrift said. “You can’t win if you don’t make the Championship Round. I’m looking forward to getting back out there and seeing what we can do.”

Reigning REDCREST champion, Oklahoma’s Edwin Evers, had a great day Tuesday, catching eight bass weighing 22 pounds, 4 ounces – the largest weight of the day – to vault from 25th place to inside the Toro Cut Line and end the day in 8th place.

“I caught the largest weight of the day, and I know that doesn’t mean a lot to some of the guys that laid off their fish, but it gives me a lot of confidence going into the Knockout Round,” Evers said. “The majority of my fish today came on a Berkley Powerbait Power Hog. I’m learning more and putting more pieces of the puzzle together each day and I can’t wait to get back out there and compete in the Knockout Round.”

The top 20 pros that made the cut and will advance in competition at Lake Eufaula are:

Overall, there were 105 bass weighing 101 pounds, 3 ounces caught by 35 pros on Tuesday, which included eight 5-pounders and eight 4-pounders caught.

Fletcher Shryock of Guntersville, Alabama, won Tuesday’s $1,000 Berkley Big Bass Award, weighing in a 5-pound, 14-ounce largemouth during Period 1. Berkley will award $1,000 to the angler that weighs the biggest bass each day, and a $7,000 bonus to the angler who weighs the largest bass of the tournament.

The 10 anglers that will compete in the Group A Knockout Round on Wednesday are:

The 10 anglers that will compete in the Group B Knockout Round on Thursday are:

All 40 Anglers competed on Day 1 (Monday) and 2 (Tuesday) of the event. Now, the field is cut to just the top 20 based on two-day total cumulative weight. The remaining 20 anglers are split into two groups – 10 compete on Day 3 (Wednesday) and 10 compete on Day 4 (Thursday). The top five anglers from each group based on total single-day weight will advance to the fifth and final day of competition (Friday), where weights are zeroed and the angler that catches the highest total weight on the final day will be crowned the REDCREST 2021 champion.

Television coverage of REDCREST 2021 presented by Old Wisconsin Sausage, the Bass Pro Tour championship, will be showcased across two two-hour episodes, premiering at 7 a.m. ET, July 3 on the Discovery Channel. A one-hour special episode of MLF Inside the REDCREST will premiere at 2 p.m. ET, Sunday, July 18 on CBS. New MLF episodes premiere each Saturday morning on the Discovery Channel, with additional re-airings on the Outdoor Channel and the Sportsman Channel. Each two-hour long reality-based episode goes in-depth to break down each day of competition. For complete details and updated information on REDCREST 2021, visit MajorLeagueFishing.com. For regular updates, photos, tournament news and more, follow MLF’s social media outlets at Facebook, Twitter, Instagram, and YouTube.