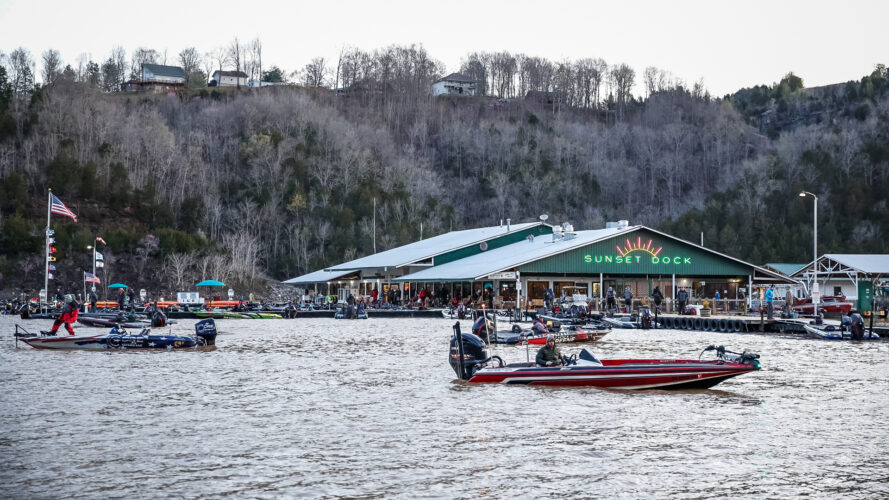 BYRDSTOWN, Tenn. – Byrdstown, Tennessee, and Pickett County are set to welcome back Major League Fishing (MLF) for an event next week, March 31 through April 2, with the Toyota Series Presented by A.R.E. at Dale Hollow Lake. The three-day tournament, hosted by the Byrdstown-Pickett County Chamber of Commerce, is the second event of the season for the Toyota Series Central Division.

The tournament will feature the region’s best bass-fishing pros and Strike King co-anglers casting for a top prize package of up to $75,000 in the pro division and a new Phoenix 518 pro boat with a 115-horsepower Mercury outboard motor, in the co-angler division.

“This tournament could be the absolute perfect storm,” said Toyota Series pro Ryan Davidson of Branchland, West Virginia, who finished in fifth place at last weekend’s Phoenix Bass Fishing League event on Dale Hollow. “Between the weather, the time of year, and the water conditions, this is setting up to be a phenomenal event.

“The lake is still about four feet below summer pool,” Davidson said. “This past weekend, the water temperature was anywhere from the high 40s to 52, 53 degrees. And we’re going to have a warming trend with temperatures in the 70s, so I imagine we’ll see a big push of staging fish that are getting ready to spawn.”

Davidson said that he predicts moving baits – Alabama rigs, jerkbaits, crankbaits, spinnerbaits and ChatterBaits to all play a role for tournament competitors. He said that the low water levels might make things a bit difficult for the anglers that like to pitch and flip, but that a little bit of rain could quickly change that.

“The weather is going to be a factor in this one, no doubt,” Davidson said. “A little bit of rain could put some color in the lake, and if that happens I think we’ll see the fish relating more to structure.

“I think we’ll see a handful of limits weighing more than 20 pounds, but with the number of anglers on the water I think that will be tough to duplicate for multiple days,” Davidson said. “If a guy can average 17 to 18 pounds a day, weigh in 54, 55 or 56 pounds over three days, they’ll be right there at the end.”

Anglers will take off daily at 6:30 a.m. CT from the Sunset Marina & Resort, located at 2040 Sunset Dock Road in Monroe, Tennessee. Weigh-ins will also be held at the resort and will begin at 2:30 p.m. Fans are welcome to attend and encouraged to follow the event online through the “MLF Live” weigh-in broadcasts and daily coverage at MajorLeagueFishing.com.

The 2022 Toyota Series presented by A.R.E. consists of six divisions – Central, Northern, Plains, Southern, Southwestern and Western – each holding three regular-season events, along with the International and Wild Card divisions. Anglers who fish in any of the six divisions and finish in the Top 25 – or the Top 12 from the Wild Card division – will qualify for the no-entry-fee Toyota Series presented by A.R.E. Championship for a shot at winning up to $235,000 cash. The winning Strike King co-angler at the championship earns a new Phoenix 518 Pro bass boat with a 115-horsepower Mercury outboard. The 2022 Toyota Series presented by A.R.E. Championship will be held Nov. 3-5 on Lake Guntersville in Guntersville, Alabama, and is hosted by Marshall County Tourism and Sports.