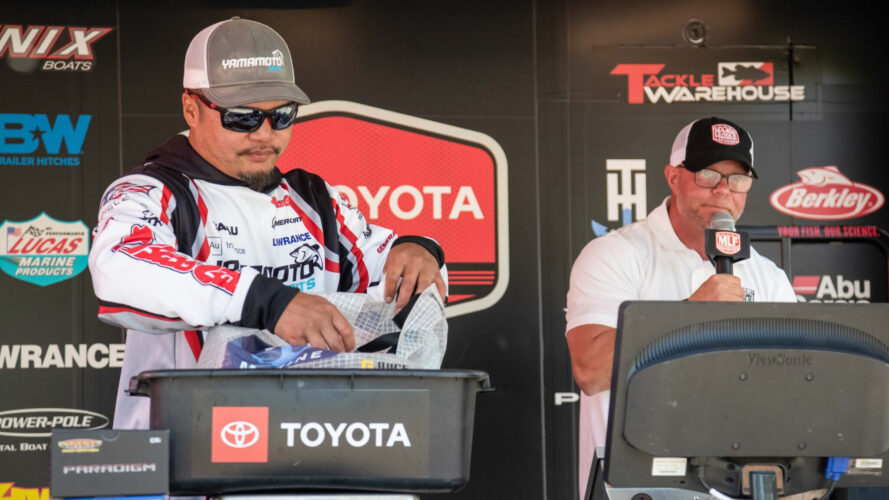 BETHEL ISLAND, Calif. – Major League Fishing, the world’s largest tournament-fishing organization, is set to return to California for a tournament next week, June 1-3 – the Toyota Series Presented by A.R.E. at the California Delta at Russo’s Marina in Bethel Island The three-day bass fishing tournament is the third and final event of the regular season for the Toyota Series Western Division.

The tournament will showcase a field of the West’s best bass-fishing pros and Strike King co-anglers casting for a top prize package of up to $75,000 in the pro division and a new Phoenix 518 pro boat with a 115-horsepower Mercury outboard motor in the co-angler division, and valuable points to qualify for November’s 2022 Toyota Series Championship.

“Man, I love fishing the Delta – it is my home away from home,” said pro Tai Au of Glendale, Arizona, who has four Top-10 finishes on the California Delta in MLF competition. “It’s crazy, but you can literally win the tournament anywhere at the Delta. All the way from north to south, you basically just have to find an area that has good grass and good water quality and then run into those right bite windows to sack up a monster bag.

“I think it’s going to be hard to consistently catch those bigger bags, but I think the winner will have something like a high 20-pound limit, followed up by a few bags close to 20 pounds. My prediction is that it will take 63 to 64 pounds to win.”

Au said that he expects there will still be some late straggler bass that are still spawning during the event, but that competitors would be able to catch fish on a variety of baits and tactics.

“The weather is definitely the most important factor. The fish there are really, really affected by cold fronts and pressure systems – they like stable water,” Au said. “I think we’re going to see a ton of different tactics in play. Buzzbaits, frogs, flipping and punching. I’ll have a (Z-Man) Jack Hammer in my hand with a (Yamamoto) Zako trailer, and a 6- or 7-inch (Yamamoto) Senko. Topwater baits are going to be important looking for those big kicker bites. Believe it or not, a drop-shot rig can catch some big ones there. It’s going to be wide open, and a lot of fun.”

Anglers will launch each day at 6 a.m. PT from Russo’s Marina, located at 3995 Willow Road in Bethel Island. Weigh-ins will also be held at Russo’s Marina, beginning at 2 p.m. each day. Fans are welcome to attend and encouraged to follow the event online through the MLF NOW! weigh-in broadcasts and daily coverage at MajorLeagueFishing.com.