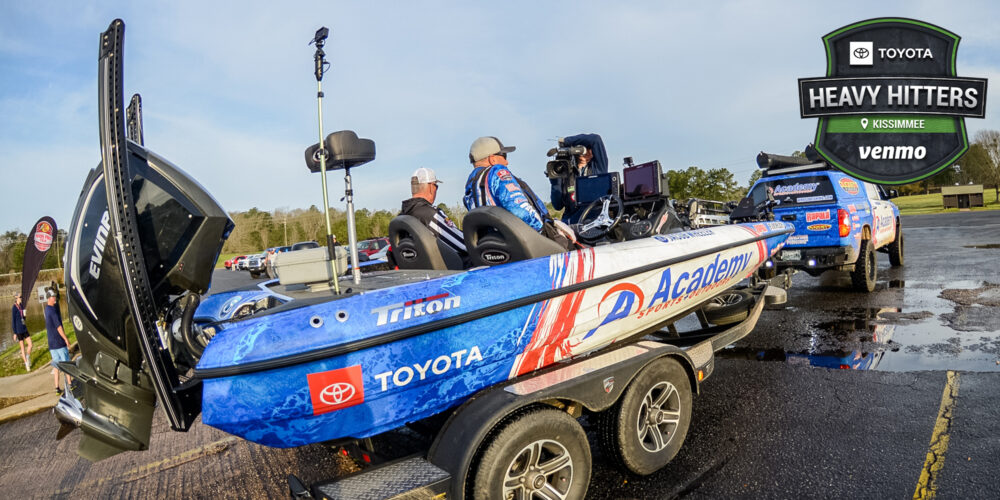 Toyota Heavy Hitters Presented by Venmo serves as the return event of the 2020 Bass Pro Tour and features a $745,000 purse and the full field of 80 anglers, including Team Toyota pros Kevin VanDam, Mike Iaconelli, Terry Scroggins, and Jacob Wheeler.  This sponsorship expands Toyota’s relationship with the MLF and FLW brands, which was originally announced in January and featured a variety of assets, including title for the FLW Toyota Series.

“It makes perfect sense for Toyota to title sponsor our inaugural Heavy Hitters event,” said Major League Fishing President and CEO Jim Wilburn. “As a trusted partner, Toyota embraces our league’s unique opportunity to showcase entertaining formats of competitive bass fishing that both teach trusted techniques from the best anglers in the world and invite new fans to the sport.”

“We’re looking forward to the excitement on the water with Heavy Hitters,” said Matt Ozawa, engagement marketing manager, Toyota Motor North America. “It’s a great opportunity to expand our partnership with MLF and FLW as well as support our Team Toyota anglers and engage with both new and longtime fans.”

Toyota has a history of supporting anglers and their families who depend on Toyota to tow boats safely to their favorite boat ramp – whether competing in tournaments or simply pursuing their weekend passion for fishing like more than 30 million other angling Americans.

“The greatest thing about being able to work with a company like Toyota is that they not only support anglers like me and the other Team Toyota pros, but they also support fisherman at all levels through their Toyota Bonus Bucks program,” said MLF pro Jacob Wheeler. “And now for them to become the title sponsor of our biggest event with hundreds of thousands of dollars in prizes, that’s huge for the sport of bass fishing.”

Originally scheduled for May 16-20 as an All-Star mid-season qualifier, Toyota Heavy Hitters Presented by Venmo will take place on Lake Tohopekaliga (Toho) and the Kissimmee Chain two weeks later than originally planned, June 7-12, due to a mid-season pause to minimize the spread of COVID-19. The event features all 80 MLF pros in a traditional six-day, Bass Pro Tour format while still offering an untraditional $745,000 purse and full-field payout. Heavy Hitters will serve as Stage Four toward the season-long Bass Pro Tour Points Championship, awarded to the angler with the most points at the conclusion of the season.

Toyota (NYSE:TM), creator of the Prius hybrid and the Mirai fuel cell vehicle, is committed to building vehicles for the way people live through our Toyota and Lexus brands. Over the past 60 years, we’ve built more than 38 million cars and trucks in North America, where we have 14 manufacturing plants, 15 including our joint venture in Alabama (10 in the U.S.), and directly employ more than 47,000 people (over 36,000 in the U.S.). Our 1,800 North American dealerships (nearly 1,500 in the U.S.) sold 2.8 million cars and trucks (2.4 million in the U.S.) in 2018.