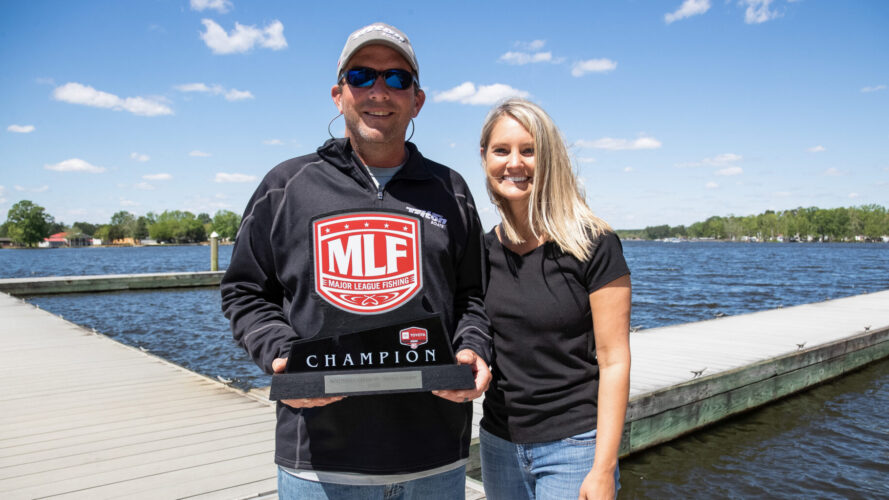 The cancellation marks just the third time in Toyota Series history that a three-day event has had competition canceled after just one day on the water. The inclement weather and wind have also prompted tournament officials at the Toyota Series event at Lake Texoma to cancel their first two days of competition, and those anglers will fish for the valuable points and prize money Saturday, also now a one-day event.

“The safety of our anglers is priority No. 1 and always will be,” said MLF Executive Vice President and General Manager Kathy Fennel. “It’s never an easy decision for our tournament directors who have to make these judgement calls, but we stand behind their decisions 100% and know that they have the best interests of all of our competitors and staff in mind. Congratulations to Bryan Cook for his victory at Santee Cooper, and we look forward to watching how the competition plays out tomorrow at Lake Texoma.”

Vance, South Carolina, pro Bryan Cook was declared the winner at Santee Cooper Friday based on his Day 1 tally of five bass weighing 28 pounds, 9 ounces. Cook earned the victory and $51,500 by a 3-pound, 7-ounce margin over second-place pro Matt Wieteha of Miami, Florida.

The event, hosted by the Clarendon County Chamber of Commerce, was the second event of the season for the Toyota Series Southern Division.

As the winner, Cook is certainly happy with the outcome but found himself disappointed that they couldn’t spend more time on the water. Fishing on his home lake, he felt he had what it would take to go the distance, no matter what the wind blew his way.

“Day 1 was great,” Cook said. “I honestly wish we could’ve fished another day or two, but we can’t control Mother Nature. I had a really good practice. I had found fish and prepared for everything from calm conditions to strong winds. I had four different patterns that I was getting bites on. With those four patterns, I feel comfortable that I could’ve consistently caught them throughout the week.”

To start the tournament, Cook targeted prespawn fish with a Santee staple – the wacky-rigged Yamamoto Senko. Pitching to key pieces of cover, a fluorocarbon leader and Falcon LowRider Salt Series rod were key to his success.

“The Senko is a namesake here that always works well,” Cook said. “I caught a lot of fish on that. Wacky rigged with a parabolic rod, that’s really important.”

After adding a few anchor fish to the box, Cook began probing grass lines with a Reaction Innovations Sweet Beaver. While the fish weren’t as plentiful, the pounds were.

“I didn’t get a lot of bites, but the ones I got were good,” he said. “I actually left those fish, preparing for the next two potential days.”

With five fish in the livewell and the wind picking up, Cook switched to two different moving baits. He leaned heavily on a Z-Man/Evergreen ChatterBait Jack Hammer, and also picked up an old-school Terminator Spinnerbait in preparation for when the wind really started to blow.

At this point, the long-term strategy began to come into play.

“When I had about 24-25 pounds in the box I considered backing off,” Cook said. “But I knew some weather was coming and I realized I needed to continue a little bit more. I caught two more key fish, which got me up to 28 pounds, 9 ounces. That was midday. After that, I cut all my hooks off and went practicing for the potential following days. I continued to have some really good bites the rest of the afternoon.”

In the end, he wouldn’t need those fish to take home first place, but it solidifies Cook’s knowledge and experience on his home body of water. He began fishing tournaments at the age of 16, when the local club actually changed the rules to allow him to participate.

“I fished out of a John boat in those early club tournaments,” Cook said. “I carried more cotter keys in my tackle box to fix the prop than I did baits back in the day.”

Cook’s investment of time and effort has certainly paid dividends, this time to the tune of $51,500 and a first-place trophy. More importantly, he has overcome the odds and solidified his place among the local legends.

“I’ve been here a long time,” Cook said. “It’s very meaningful to win here against all my idols – the people I’ve looked up to my entire fishing career – it makes it really special.”

Robinson took home an extra $1,000 as the highest finishing Phoenix MLF Bonus member. Pros are eligible to win up to an extra $35,000 per event in each Toyota Series tournament if all requirements are met. More information on the Phoenix MLF Bonus contingency program can be found at PhoenixBassBoats.com.

The Berkley Big Bass $150 award winner in the Strike King co-angler division was Mark Howard of Emory, Texas, who caught a 7½-pounder.

The next event for Toyota Series Southern Division anglers will take place May 19-21 – the Toyota Series Presented by A.R.E. on the Harris Chain of Lakes in Leesburg, Florida, hosted by Lake County, Florida. For a complete schedule, visit MajorLeagueFishing.com.