Newell’s take on what went down at Ouachita 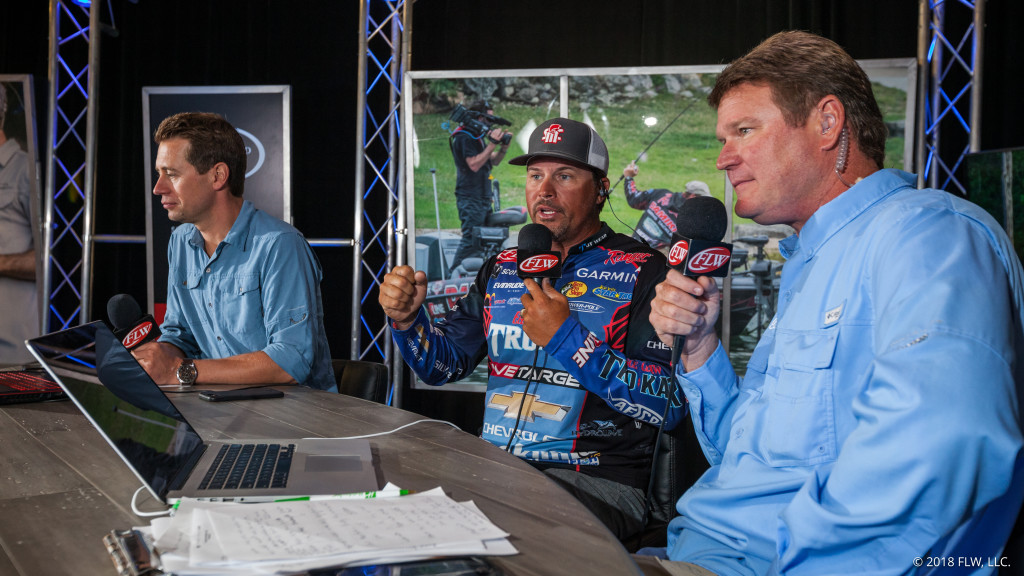 Yes, I know I’m a little late with the Forrest Wood Cup edition of Studio Notes. But as the old saying goes, better late than never, which is sort of how the Cup itself unfolded this year.

After two days of rather anemic action from the water at Ouachita, I was beginning to wonder if we were ever going to get any fireworks. Finally, Clent Davis delivered on the final morning, mounting a dream charge from 10th place to win and providing fishing fans with the most stunning comeback in Cup history.

Davis made history by becoming the first Cup angler to go from 10th to first on the final day in the cumulative weight era. However, there were a few more things about Davis’ winning numbers that were pretty remarkable.

First, on days one and two, Davis brought in identical limits – 9 pounds, 8 ounces. What are the chances of that?

The twin limits gave him a two-day total of 19 pounds even, which put him in Championship Sunday’s top 10 by a single ounce. One ounce less and we would be talking about a different Cup champion right now.

Out of four Cups contested on the warm, summer waters of Lake Ouachita, three have now been won deep and only one shallow. The stats seem to be piling up in favor of the deep-water bite taking the Cup. But it’s important to note that all three of the deep wins have come thanks in large part to one magnificent day. Similar to Davis’ big final day, both Scott Suggs (2007 champ at Ouachita) and Scott Martin (2011) had big single-day catches from the depths to bolster their winning totals.

It always seems Ouachita’s shallow-water bank-running bite is good enough to get a few anglers close to the winner’s circle, but in the end a large single-day catch from offshore trumps them.

Clent Davis’ win left a lot of anglers wondering why brush piles worked for him and not others. Plenty of Cup anglers sampled brush in practice and had poor results. During his guest spot on FLW Live, Scott Martin ventured a guess that brush piles worked for Davis due to the section of the lake where Davis was fishing.

Martin noted that when he won out deep in 2011, the level of bait and fish activity in the section of the lake where he fished seemed to be much higher that anywhere else on the lake that year. Martin fished in the south-central part of the lake in 2011, and several other high finishers came from that section of the lake as well.

When Brad Knight won in 2015, the northeastern section where Big and Little Blakely creeks are located was the hot zone.

“There is no doubt about it,” Davis says. “I noticed that in pre-practice. I looked and fished all over the lake, but I had one section that definitely had more life in it, and that’s where I spent the tournament. I could see a lot more activity around the brush piles with my electronics. I would get a lot more bream nibbles in the brush piles in that area. Fish would come up schooling throughout the day. It just felt alive.

“I didn’t find that kind of activity anywhere else on the lake,” he adds. “I found over 1,000 brush piles on Ouachita in pre-practice, but the only ones I fished were within a few square miles of each other.”

Davis spent most of his tournament time in the north-central to northwestern portion of the lake.

One of my favorite parts about working FLW Live from the Cup is having a large roster of special guests to invite to the desk to help break down the action.

On day one, Suggs provided great information about the specific patterns available on Lake Ouachita. In doing so, he compared and contrasted Lake Ouachita’s shad and bream forage base to Lake Murray’s blueback herring forage base. Since the Cup has been held on both lakes several times, Suggs gave some valuable insight into how the bass behave differently on each lake because of the differing forage bases.

On day two, Nixon offered some great information on how to deal with the dog days of summer.

I also broached the subject of on-the-water disputes with Nixon. In all my years of covering his numerous accolades along the FLW Tour, I’ve never seen or even heard of Nixon getting into any kind of territorial dispute or verbal argument on the water. Given the intense competition and crowded fisheries these days, that’s a hard thing to do. Nixon provided some candid advice on how to avoid on-the-water entanglements; true words of wisdom from one of the classiest pros on Tour.

On day three, Morgan came in early during the show and addressed some of the finer points of flipping deep grass.

Scott Martin joined us on day three just as Clent Davis was putting together his final rally. Having been in Davis’ shoes himself in 2011, Martin’s commentary about Davis’ location, technique and state of mind was spot on.

If you want to watch any of these excellent segments, all three days of the Live Show from the Cup are archived on YouTube.

During Clent Davis’ hectic Cup week, he lost his landing net, which might have blown out of the boat at some point. Going into the final day, he realized he didn’t have a net and turned to Michael Neal for help. Always willing to help out a friend, Neal thought nothing of it when he lent Davis his lucky landing net.

As the action unfolded on FLW Live, Neal watched in awe as his trusty net helped Davis hoist 17 pounds, 13 ounces of Cup-winning bass into his boat.

“At one point I started to wonder if I should charge him by the pound or by the hour for the use of my net,” Neal joked.

After Davis collected his check for $300,000, Neal did a little math to figure out just how much money had been hauled in with his lucky net over the years. The results? Neal says a little more than $628,000 worth of bass have been hoisted aboard with his net.

“Clent wanted my address so he could send it back to me, but I told him he could keep it,” Neal says. “Clent is a friend, and I was proud to see him come back and win like that. It’s pretty inspirational. And if my net was part of that, I’m just glad I could help him out.”

For inquiring minds who want to know, Neal says the net is made by RS Nets (Small Jaw model) and is the best net he has ever used. I’m pretty sure Davis would agree.