Setzer, Webster and Beavers all cross the 25-pound mark 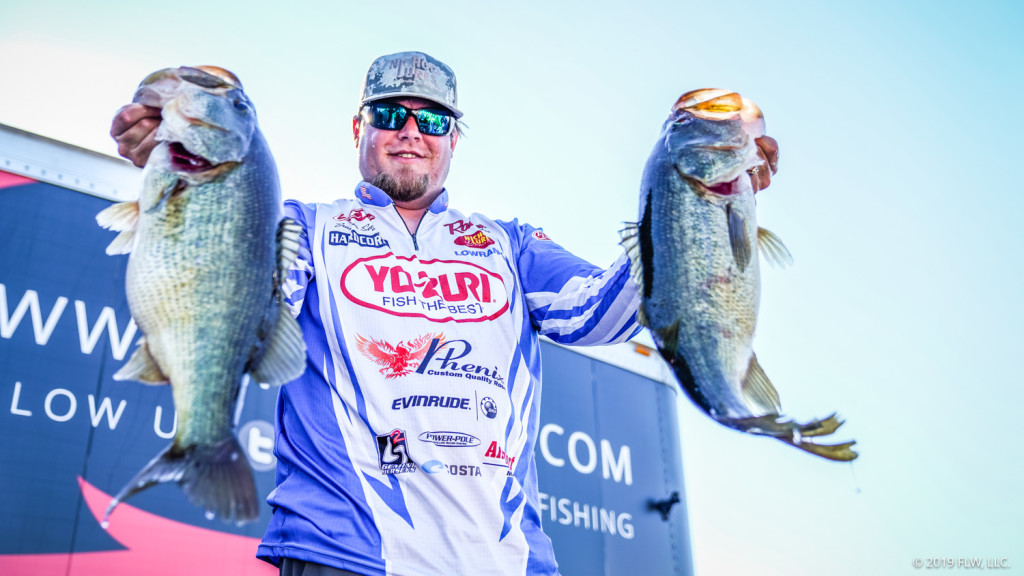 After a cold front passed through the region during practice, day one of the FLW Tour event on Lake Seminole, which is presented by Costa, was better than most expected. A chilly start to the day gave way to sunny, mild conditions, and the bass responded. Braxton Setzer got off on the right foot with a 25-pound, 15-ounce limit to hold just a 6-ounce lead over Joseph Webster.

Setzer is fresh off a top-30 finish at the previous Tour stop on Toho, where he worked offshore hydrilla for some stout bags of fish. He kept that same mentality this week, and so far, it’s paying off.

“I committed myself to the offshore before practice even started,” says Setzer. “I just know [on Seminole] that when you find them offshore you can find where they are coming to and going back to, and you can get right in a hurry in one spot. It was fun today.”

Though he only caught eight or nine fish all day, the quality is there for the Montgomery, Ala., pro. And believe it or not, he didn’t even get to fish the main spot he wanted to. 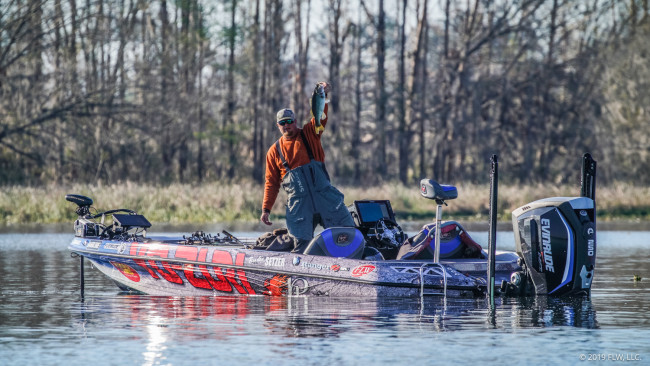 “Things kind of started slow this morning,” he continues. “I started short of where I wanted to this morning since nobody was around and figured I’d work my way up to my waypoint. Well, I look up, and Webster pulled in right on the spot and started beating on them. I thought, ‘You dummy, you should have started on the waypoint.’

“I struggled a little after that, but started to pick apart the area I was in because it is a bigger area than where I wanted to go, so I had more water to cover. The spot I wound up catching them on is basically a ditch that leads to a flat with a clean spot on it. That clean spot is where I caught the majority of my fish.”

With a limit around 9:30 this morning, he kept picking apart water around the area until the bite dried up at 11 o’clock. From there, Setzer ran to another likely spot he had eyes on to see what it could offer.

“I had one more little area I wanted to check and I got over there and culled up two more times. It’s just so slow in the area I went to second today. It’s hard to get bit in that area, but it seems to be a good one when you do.”

Setzer remained quiet on baits for now, but says that two presentations did the bulk of his damage.

While he isn’t completely sure that lightning will strike twice, Setzer does feel confident that his areas have both prespawn and postspawn fish in them. While just one of his keepers today was postspawn, Setzer is prepared for fish to push shallow in the coming days with the warmer weather, and he’s optimistic more postpawn fish will show up.

“I have one or two more areas I can go to if I need to, but it’s going to be interesting to see what the boat pressure does to my main spot,” he admits. “I may have to run around a bit tomorrow.” 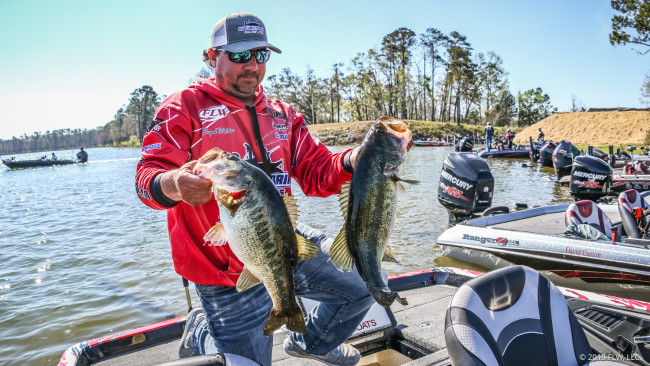 Keeping the momentum train rolling after a top 10 on Toho, Joseph Webster wasted no time getting to work this morning and wound up hauling in one of three bags that would surpass the 25-pound mark.

Webster spends a fair amount of his time on the Tennessee River, so fishing grass in the spring of the year isn’t anything new to him. In fact, he says Seminole this week resembles Guntersville in some ways. Still, the Alabama pro was dead set on flipping all day long for just a few bites, but decided to give one offshore spot a try first thing in the morning.

“I pulled in on my first spot and Jordan [Osborne] was already down there,” Webster says. “We stayed about 50 yards apart and I had five fish for 18 pounds in my first five casts. They were in there thick.”

Webster caught about eight keepers off the juice before pulling back from it to go check some other water. He came back at 1 o’clock and culled again.

“I only caught a 1 1/2-pounder and a 3 1/2-pounder off that in practice,” he adds. “I was glad to know there are good ones there. It just made me sick to have to throw a 4-pounder back this afternoon with that cull.”

All of Webster’s bass were fat, prespawn fish. That does concern him slightly heading into tomorrow with warmer weather on the horizon.

“I just hope they don’t all leave and go to spawn. They’re just so big and fat that you know they want to.” 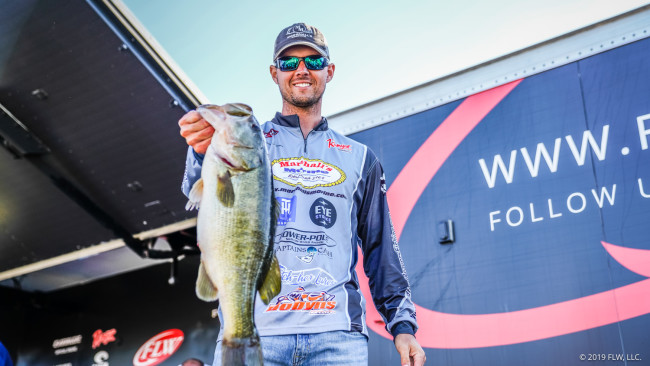 If there’s ever a time to have your best day on a given body of water, it’s during competition of an FLW Tour event. That’s exactly what happened to Tour rookie Bradford Beavers today as he sacked up over 25 pounds and got off to his best start this season.

Beavers is one of few pros who have experience on Seminole, and surprisingly enough, none of his history really helped.

“I’ve never really fished this way on Seminole before,” says Beavers. “I’ve seen other cold front tournaments play out like this, and I figured what I’m doing is the best way to win. Today was by far my best day ever on this lake.”

While he can’t let off the gas just yet, Beavers also knows that things can change in a hurry on this pond.

All of his fish were prespawn today, which, as is the case with Webster, gives him a bit of concern. 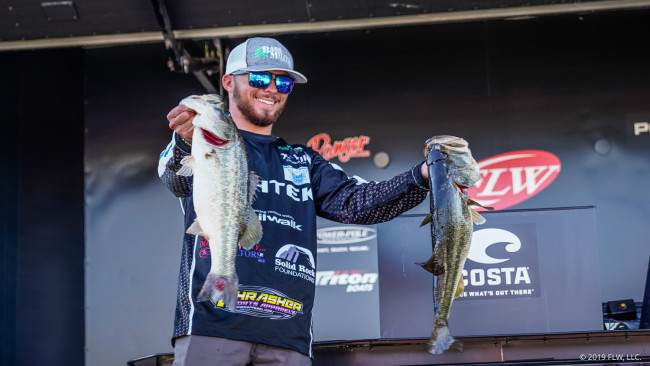 Second year Tour pro Sheldon Collings also didn’t waste any time this morning putting fish in the boat. While others were still working on keeper No. 1, Collings was trying to cull.

“I found a spot in practice where I caught two 7s and a 6-pounder,” Collings says. “I pulled up there this morning and fished around for a bit, and when I got on the right place, I had one try to eat my bait at the trolling motor as I was bringing it up. I missed it and when I looked at my graph it was lit up. So, I backed off and caught them for 25 or 30 minutes straight.

“There are so many fish on that spot. I told myself I found a Kentucky Lake school of bass.”

Once the action died off, Collings prospected the area around him hoping to dial in on some other active fish. With no luck, he returned to where he started and caught a 5-pounder.

He notes that one reason he believes the area is so stacked with bass is because the wind has been blowing into it all week. The other thing that he has going for him is the lack of other boats fishing the same area. Needless to say, Collings is pretty fired up to get back out on the water tomorrow. 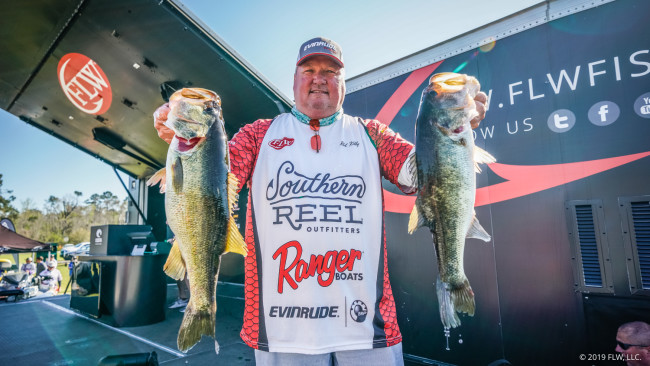 Longtime Tour pro Rob Kilby ran a pattern to the tune of 23 pounds, 3 ounces, which is more than enough to keep his name in the hat for the title this week.

While many of the other top pros are relying on a number of certain spots to catch their fish, Kilby is more dialed on where to find the fish and what to throw at them.

“I have a little stretch where I caught most of my fish,” says Kilby. “I didn’t have anyone around me doing what I’m doing.

“I had to get everything right to get one to bite in terms of presentation and color,” he adds. “The scary thing is that I lost two big ones today, and I caught a 12-pounder in practice fishing the way I am.”

Getting a big bite is certainly the way to make moves on Seminole, and Kilby seems to have that dialed, though getting all of them to the boat is another story. He’s got a handful of areas where he can run his pattern. One stretch has proven to be the juiciest so far.

Kilby is targeting prespawn fish, and though he’s fished Seminole numerous times over the years, past experience hasn’t helped him much this time around.

“This week was like starting over,” Kilby says about fishing history. “I had to get over what used to be and just fish the fish.” 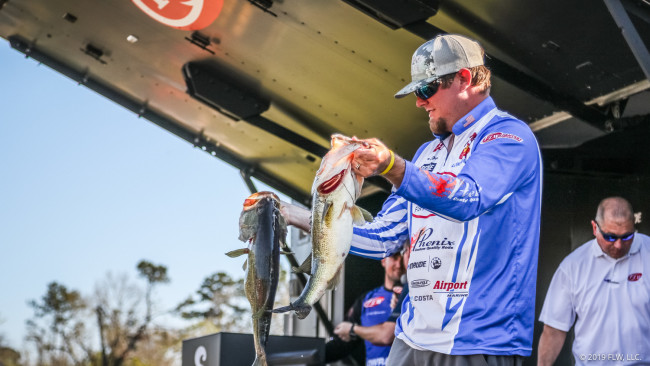 Since there isn’t much for Tour history on Seminole, the Costa FLW Series is the best resource for weights and tournament statistics. In the last three years of Costa tournaments on Seminole just one bag has been weighed on day one of competition bigger than Setzer’s opening-round limit of 25-15. Last year, Rick Tindell weighed a stout 26-7 bag and the closest to Setzer’s mark was John Duvall’s 25-pound bag in 2017. Even though there was plenty of griping to be heard in practice, things seem to be off to a rocking start. 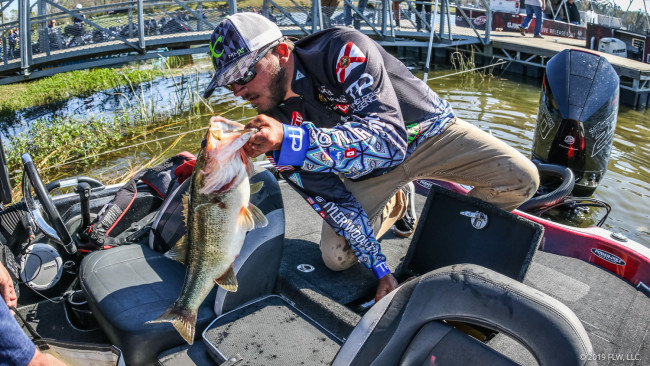 Lack of experience on Seminole may be an advantage this week for many, and a good point to illustrate that is the fact that eight rookies currently reside in the top 30 on the leaderboard. Beavers leads the charge with his third-place bag of 25-2, while Tyler Woolcott (seventh with 19-14) and Dicky Newberry (ninth with 19-7) help carry the squad atop the leaderboard.

As if 70 consecutive FLW Tour limits isn’t crazy enough, Bryan Thrift notched another limit today to bring the streak to 71. Though it may not be his strongest limit in a while (10 pounds, 6 ounces), it’s more than enough to keep the ball rolling for another day.