Putting a bow on practice with the two-time Champlain champ 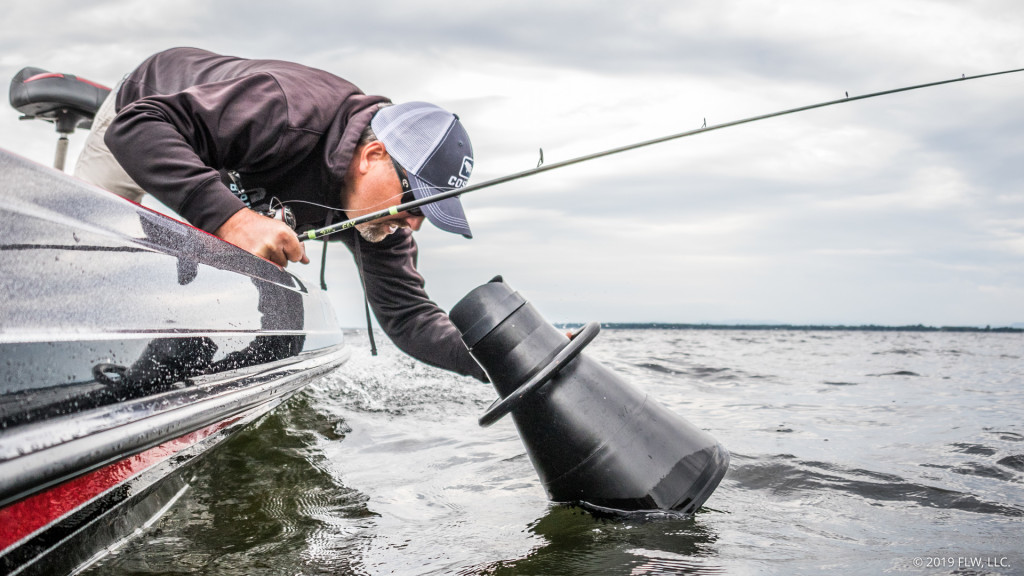 Winning one Costa FLW Series event is hard to do. Winning in back-to-back years on a lake that is more than 12 hours from your home is downright unheard of.

One of the standout rookies to hit the FLW Tour in 2019, Nelson has won the last two Costa FLW Series events held on Lake Champlain. In the process, he’s triumphed over notable locals such as Chris Adams and Brett Carnright, and professional anglers Chris Johnston, Austin Felix and Bradley Dortch.

Nelson is easily in the group of favorites in the event and a bonafide Northern expert, so I was eager to hop in the boat for a morning with the smallie snatcher. Champlain isn’t fishing quite like it was the years he won, but Nelson is still guaranteed to have a lot of eyes on him come day one. 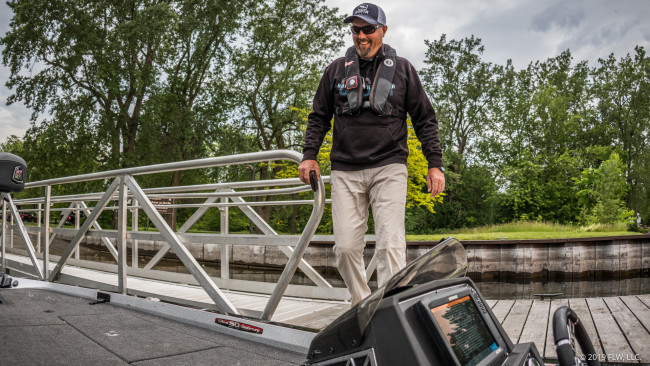 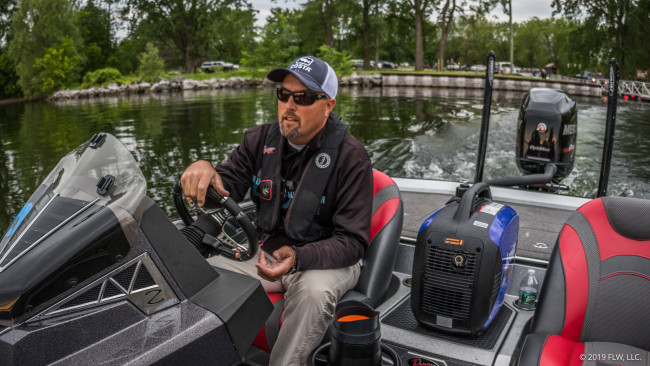 Though Nelson was initially planning on going up to Missisquoi to look for largemouths, an early morning change of plans has us starting on the New York side instead – at least for the morning, before the rain really rolls in and the wind kicks up in earnest.

Nelson is known for his affinity for and skill with bedding smallmouths, so it’s not really a secret what the pro is looking for.

“If I can find one weighable fish this morning then it’s worth staying down here,” he says as we blast off onto the big lake. 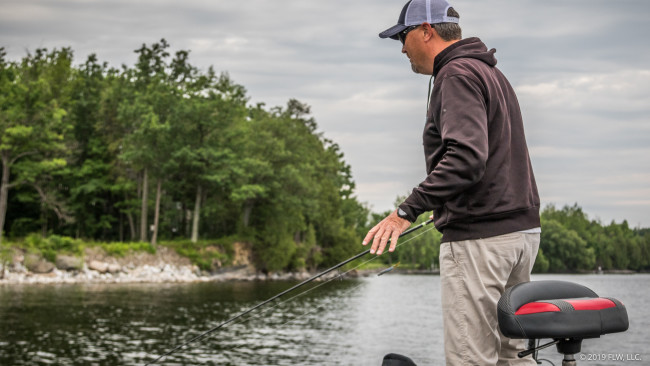 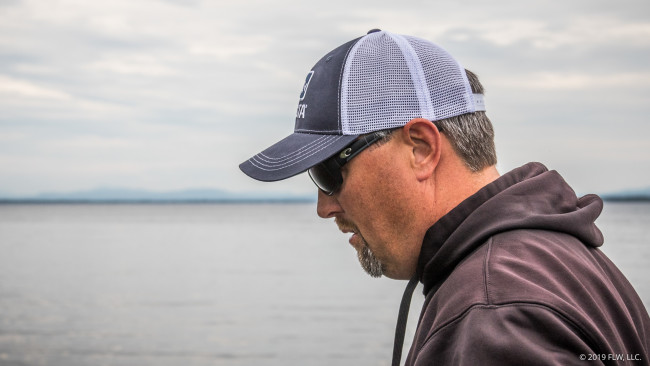 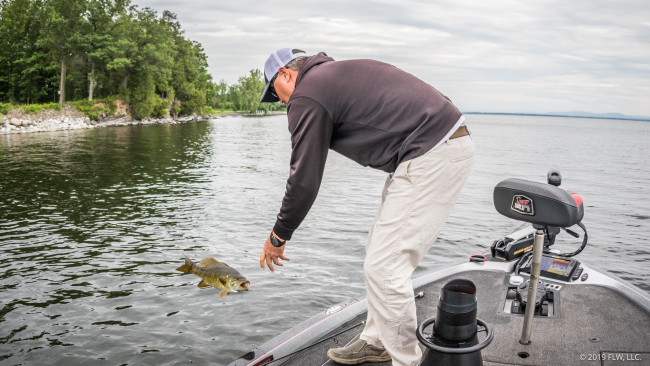 Setting the boat down in the calmer water behind a slight point in the shoreline, Nelson starts looking. He says the smallmouth bed-fishing hasn’t been nearly as good as it was last year, and that the fish are a bit thinner. He thinks the high water has changed things, because according to him, the smallies are still in the same places, but they aren’t spitting up alewives when he catches them. Last year, he figures they were guarding their beds but also getting a chance to eat during the process.

Of course, the fishing isn’t that bad – Nelson catches one off a bed about five minutes into the day. 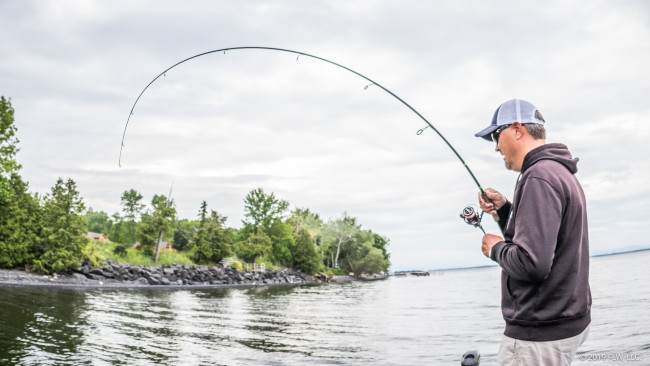 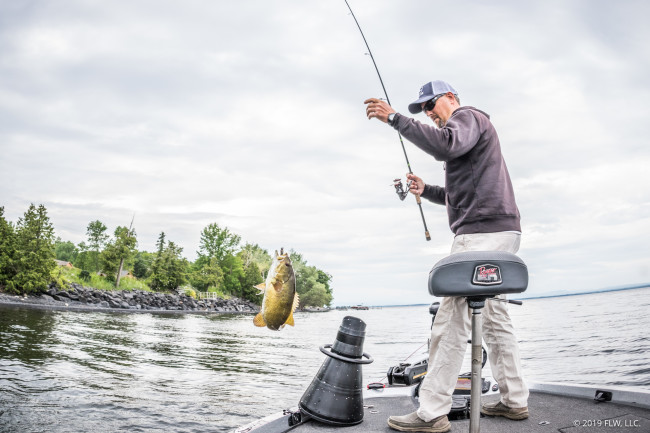 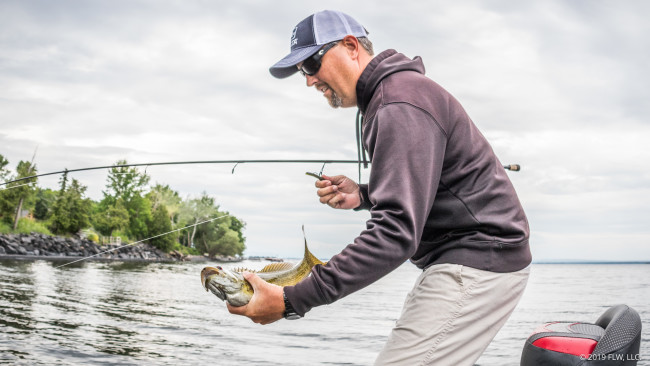 Continuing along, he explains that he’s relied a lot on history so far.

“It’s hard to go fish new water, because that stuff I’ve had the last two years has been so good to me,” says Nelson. “The first year I didn’t have much time, but last year I had a lot of time to practice and kind of dial it in. Last year I felt like I was really in tune with the lake, and the areas I was in were prime. This year it feels like I’m off a step, but there’s no reason to hit a panic button.”

After adding another fish or two and spotting a few more empty beds, Nelson decides to make a move. 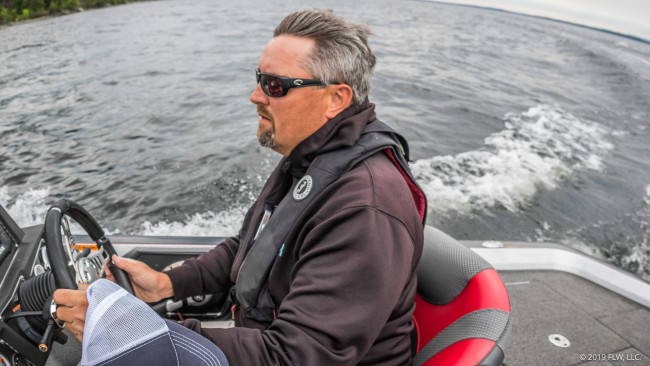 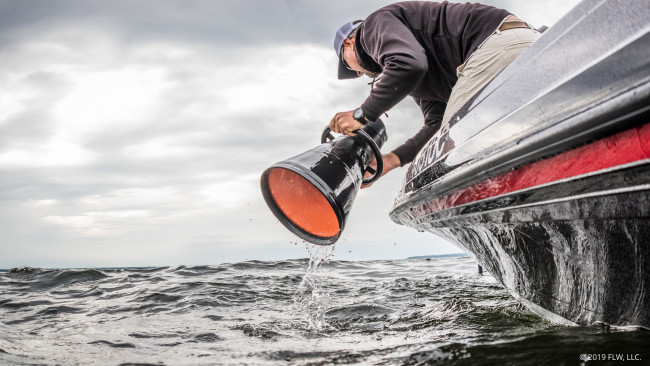 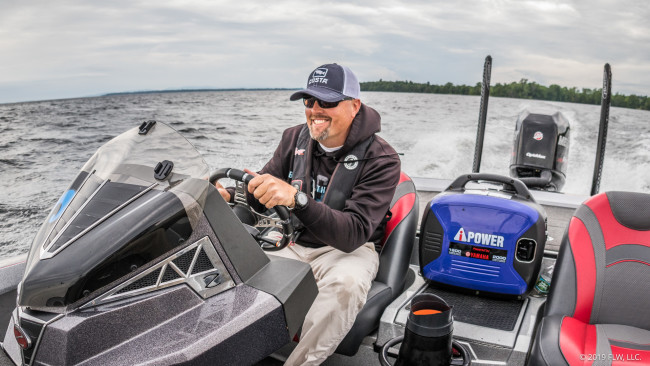 Running a ways, Nelson decides he wants to check on a few fish he’s planning to weigh in during the tournament. He catches and weighs them while a pontoon boat with some other anglers watches, so he’s a little more concerned than usual. After a moment of fishing a nearby bank to let a competitor leave, he sidles up to the waypoints and leans down with the Flogger. One look is all it takes; they’re there.

After running a bit farther up into the wind to check a couple beds that were empty the day before, Nelson heads back to some calm water. 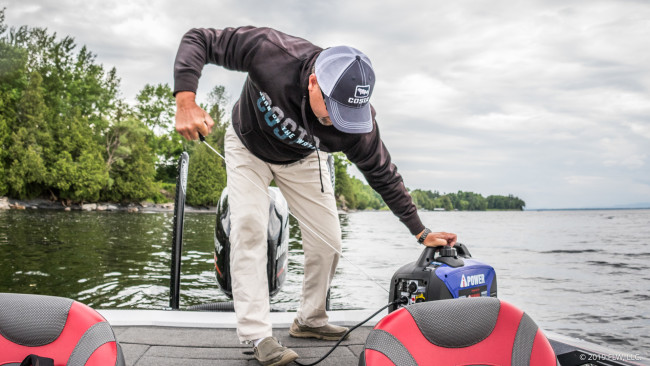 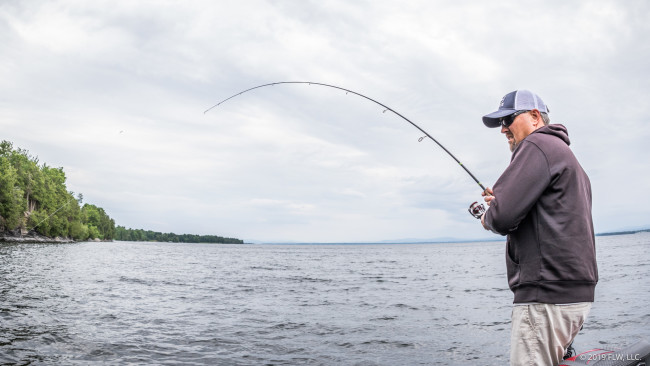 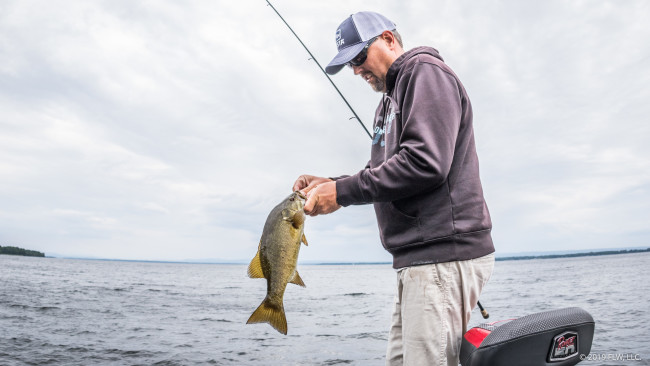 Settling down again, Nelson gets back to looking for new beds and cranks up his generator.

Though both are handy, he certainly isn’t in love with them. The sound of the generator wears on him. Nelson also says he wouldn’t have won the FLW Series event in 2018 without the Flogger, but he’d be just fine seeing it ruled out.

Seeing how often he can spot tricky beds with just his Costas, I think he’d still catch plenty of smallmouths if he couldn’t use a Flogger. 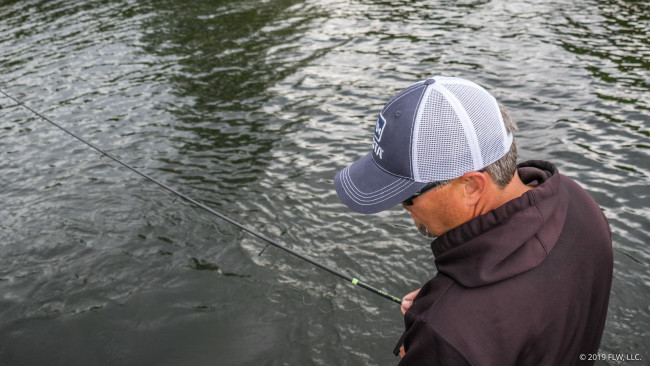 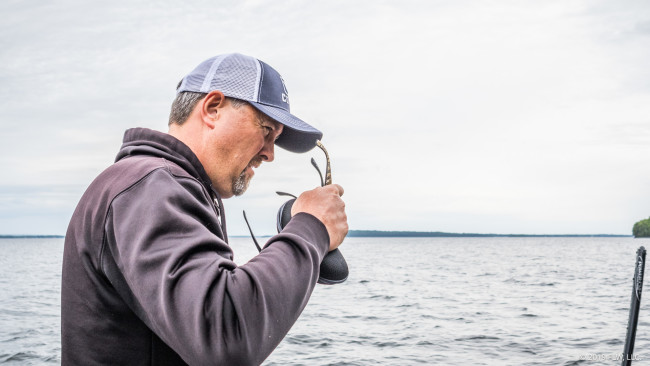 Nelson pauses once to swap between lenses to see what shows the bottom best, but he is increasingly fighting the clouds and wind. Even so, he’s an expert at spotting the little bottom differences that indicate beds and then figuring out how to find out if there’s actually a fish there or not. One move he’s fond of is to swing the bow of the boat over the bed, throwing a slick of calmer water behind him as he goes. From there, he can peer in between the waves with relative ease. 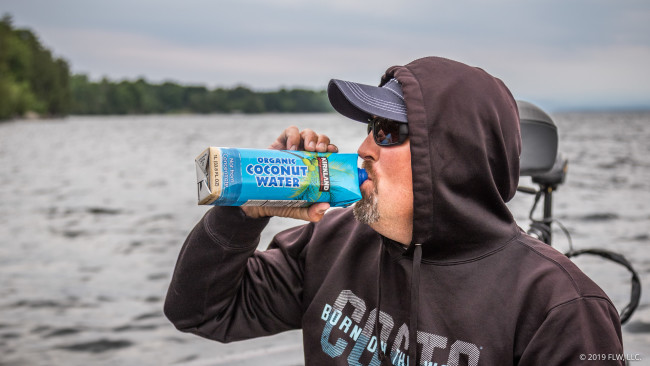 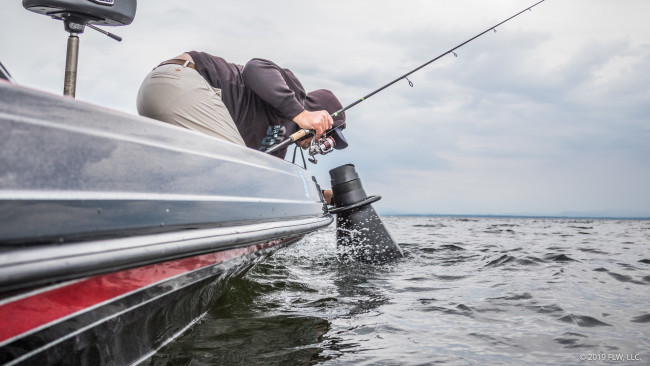 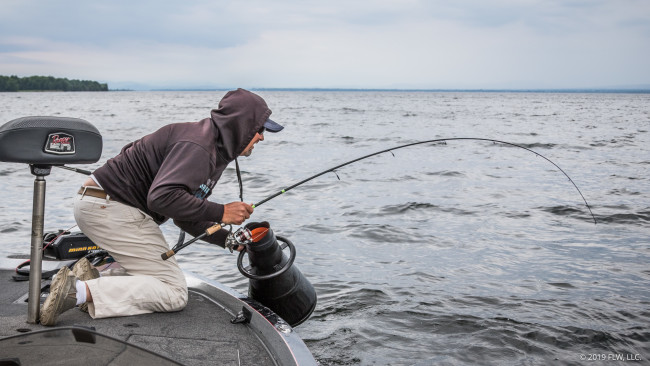 After finding another small one, Nelson takes a break to re-rig his worm (he’s had one rod on the deck all morning) and have a drink of coconut water. A couple minutes later, after a few misses on one fish, Nelson foul hooks it in the stomach. Though it isn’t ideal, it’s confirmation that he’s not going to fish for it on derby day.

As the wind continues to build, I ask how he’s been splitting up his practice thus far.

“I did a little largemouth yesterday and the first day, but mostly this,” says Nelson. “I haven’t seen any largemouth that I’ve really liked, and the forecast is changing so much it’s hard to figure out a definite strategy.” 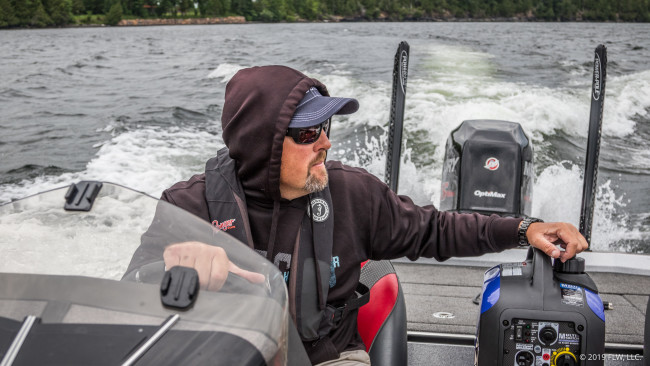 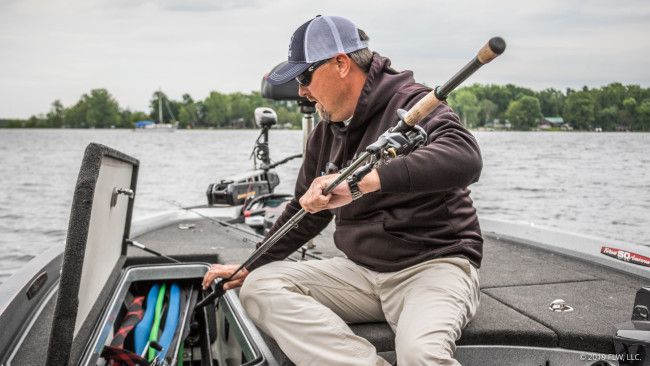 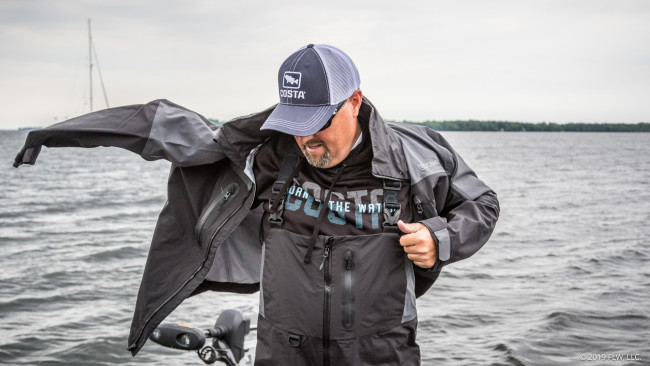 Finally, pulling the plug on smallmouths for the time being, Nelson runs into a nearby bay. After a brief glance at one more potential bedding stretch, he grabs some weedless stuff, dons his rain gear for the approaching weather and starts looking for green fish. 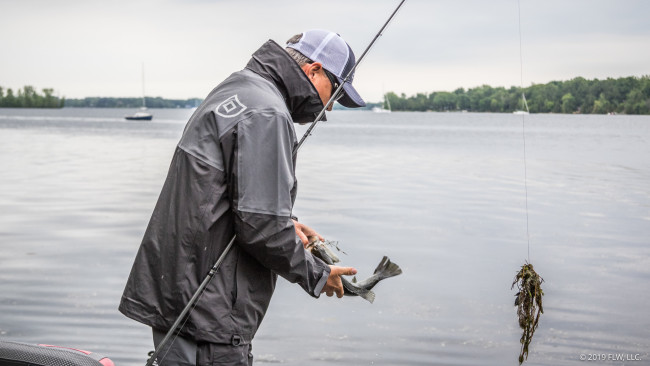 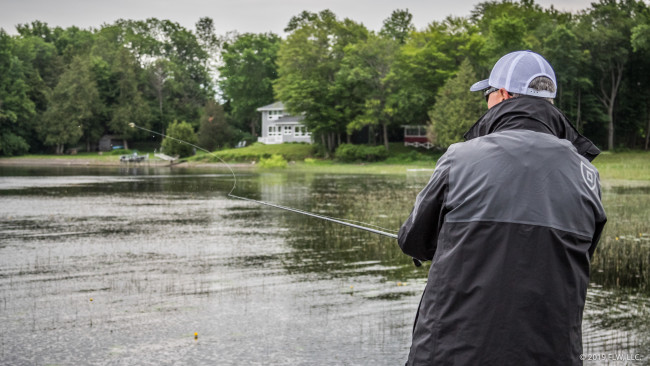 Nelson slips around up shallow and starts looking for bluegill beds that could have largemouths hanging around them. Flipping the occasional bit of matted cover, he catches a small largemouth pretty quickly. Then, it’s on to a new stretch of largemouth water – one that’s loaded with bowfin and a little more favorable for his swimbait. 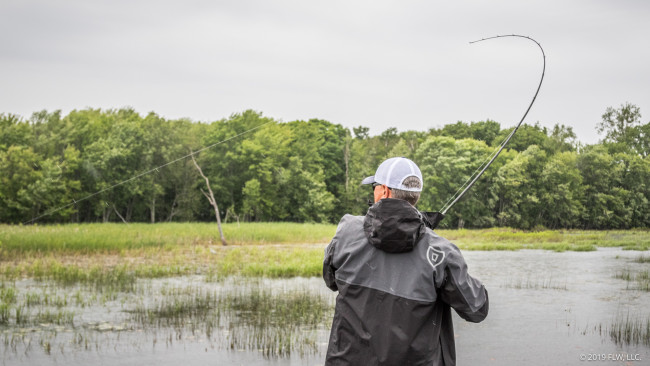 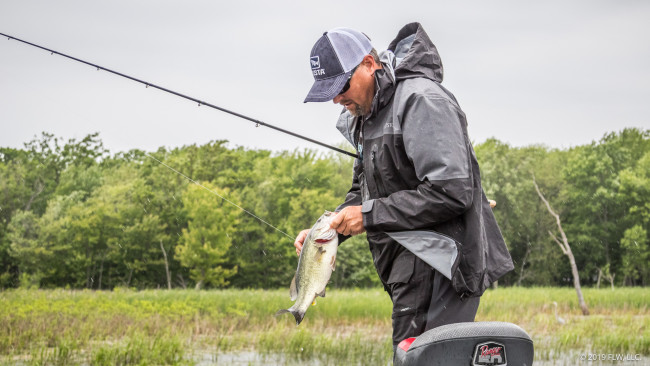 At the next stop, Nelson hooks up again, confirming a little pattern he’s developed that is at least good for keeper green ones. Though, perhaps not for big ones. With the wind and the rain continuing to build and this particular area about fished out, Nelson figures it’s time for a change. 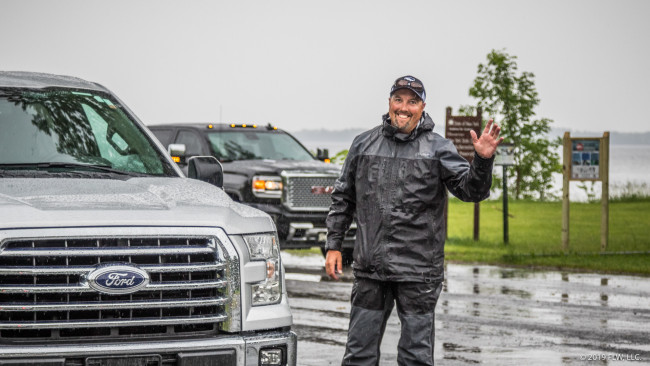 After battening down the hatches, we roll back across the lake in a pretty solid Champlain chop with plenty of stinging rain mixed in. Then, he elects to load the boat up and make the drive north to Missisquoi to continue the largemouth hunt. With about half a day left, and no new bed fish added this morning, Nelson is still on the hunt for another winning Champlain combination.