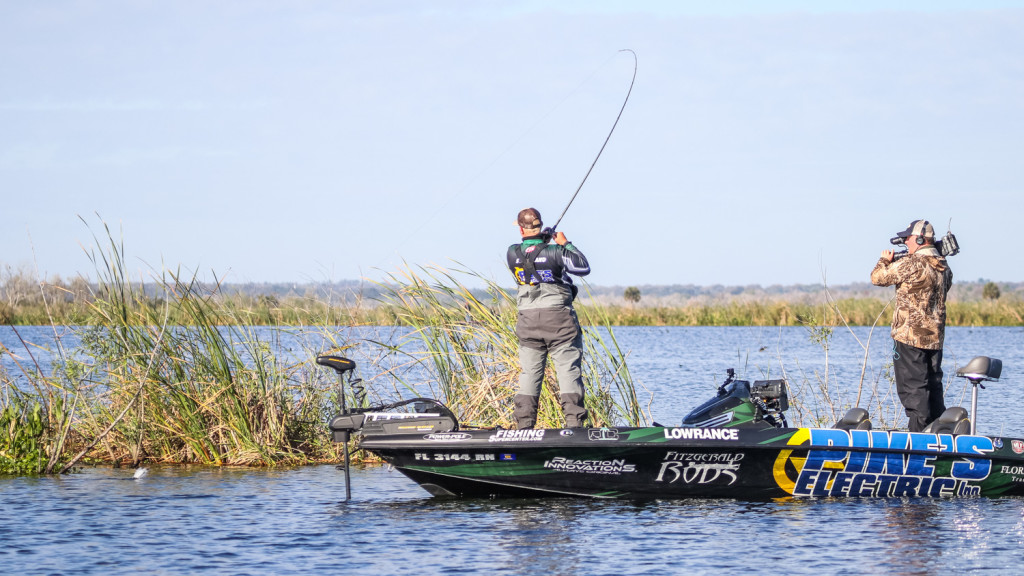 Thanks for following along throughout the Tackle Warehouse Pro Circuit event presented by Bad Boy Mowers at the Harris Chain. It's been a great tournament full of giant bass, and this one is still too close to call. One good fish in the final hour could ultimately decide the winner.

Will it be Strickland? Can Washam retake the lead? Or will Freeman find another keeper or two to get back in the running?

We'll find out at 4 .m. ET during the weigh-in. Tune in live to see for yourself.

Hunter Freeman is leaving Griffin and headed back to Harris. That's big news, since he still doesn't have a limit and is vacating his primary area. We'll make one final post in a few minutes to wrap up today's on-the-water coverage. Stand by.

1:35 – Another cull for Strickland

The Speed Worm does the trick for Strickland, who just put another 2 3/4-pound fish in the livewell for a cull. "I seen him swim by my boat, pitched my Speed Worm to him and he ate it. What kind of luck is that?" If he keeps upgrading little by little he might be able to hold off Jimmy Washam, but there's still a lot of time left to fish.

A few other upgrades:

Tyler Woolcott has had a good day, now with 15 pounds.

Miles Burghoff has started making his way back toward weigh-in. He says his best water isn't warming up fast enough for his fish to turn on, and he still needs two keepers. So he's heading to a protected canal to try to take advantage of the perfect sight-fishing conditions to try and swing for the fences on a couple of spawners. He caught a 7-plus there on day one.

Laramy Strickland and Jimmy Washam are punching back and forth. Washam took the lead, and 20 minutes later Strickland caught a 3-pounder to retake the lead. "That one felt good," he said. Strickland says he's focused on grinding in this area as long as he can. Then he's going to tidy his boat and head back through the lock to finish out the final minutes of the day.

After a protracted fight that took him all the way around the boat, Jimmy Washam was able to slip his dip net under a 3 3/4-pound largemouth bass that culled out a 2 1/4 in his livewell. That fish puts him ahead of Laramy Strickland on our unofficial leaderboard. The full-time law enforcement officer is chasing the biggest win of his career, and he's not too far away from the finish line right now.

"I just can't wait to cast back in there," Washam said. He's got a little something figured out and has landed several fish in the last half-hour using a Megabass Ito Shiner jerkbait.

12:30 – Strickland gets his limit with a kicker

Laramy Strickland caught a 1 1/2-pound bass to reclaim third place with four in the box, then added a 5 1/2-pound kicker for his limit fish. "They're starting to bite," he said on FLW Live. That's bad news for everyone else.

Meanwhile, Ron Nelson is staring at an 8-pounder on a bed. He's a lethal sight-fisherman, so stay tuned because he can make a big move if he gets that one to bite.

Chad Warren is piecing together a really solid day. He has 16 pounds now and is in third place on the unofficial leaderboard. 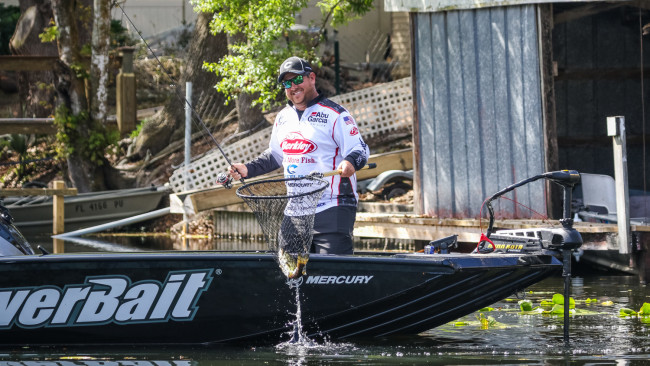 A lot has happened in the last 30 minutes.

Jared McMillan's bite totally shut down. He's scrapping around for a bite.

Tyler Woolcott made a couple of culls to get into the low teen range.

Billy McDonald put a second 2-pounder in the livewell.

Jimmy Washam made a small cull after moving to Lake Eustis. 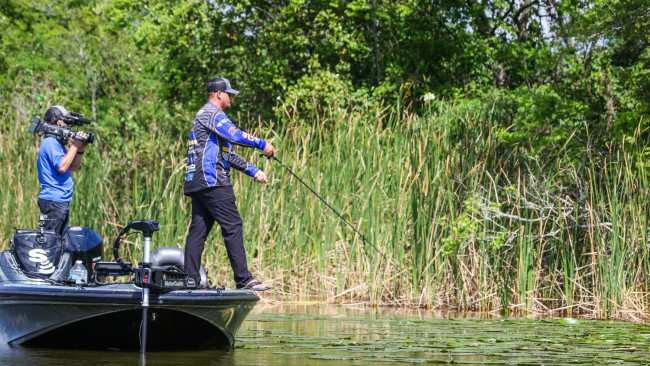 Miles Burghoff is finally heating up. He got three bites in one stretch and caught two fish pretty quickly. Burghoff now has about 6 pounds in the livewell. He doesn't have a lot of time left, though. He'll be making a long run back from Apopka.

Also in Apopka, the McMillan brothers continue to catch fish pretty consistently. They just need to find some better quality. Both believe that bigger fish could be moving in as the day warms, but because of the travel time back, they might miss their window to catch them.

Matt Stefan, who's fishing close to the ramp, has also had a steady day of catching. He's up to 16 1/2 pounds and a top-five placement.

Finally, Laramy Strickland put down his punch rig and is throwing around a worm, just trying to figure out what has changed and what he could do to turn around his luck.

Miles Burghoff has his first bass now, too. He caught a 2-pounder. 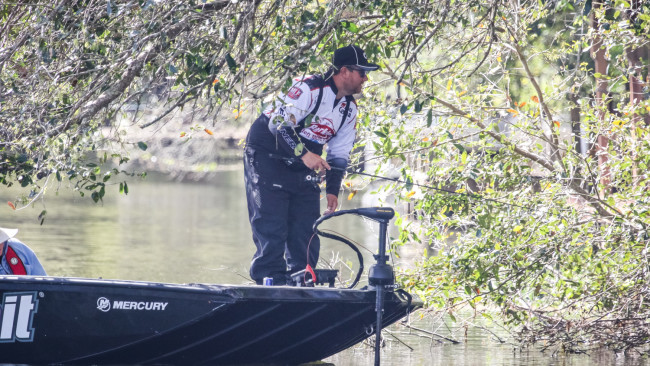 John Cox is finally on the board with a 1 3/4-pound bass. He'd previously said that if he couldn't catch that little guy, he was going to have some serious problems. Well, he caught it. Now he's back on a giant that's bedded down nearby. 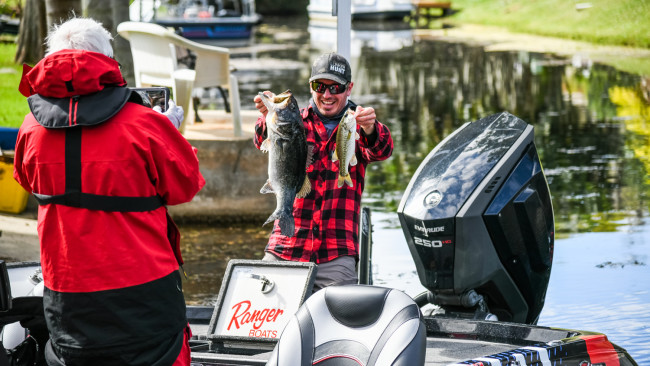 Our leader from yesterday, Laramy Strickland, has switched fishing pads. He's talking about making a move to a new marsh since he can't seem to get anything going in his main area from yesterday. 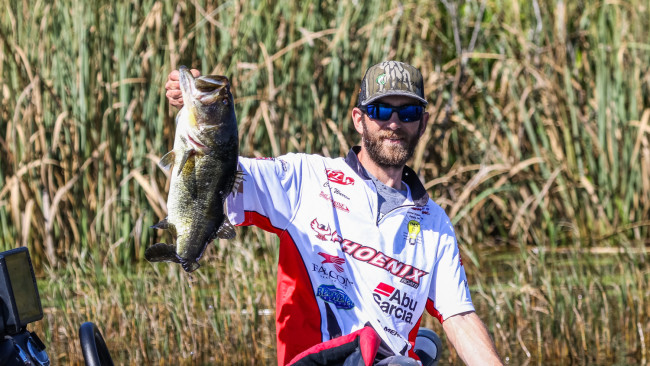 The first real giant of the day has fallen to Chad Warren. The Oklahoma pro caught a 7-pounder. It's his third fish of the day for a total weight of 10 pounds, 4 ounces.

Hunter Freeman added a 2-pounder to his total. He's now our unofficial leader. John Cox is still struggling. He's spotted several good fish on beds, but they aren't willing to cooperate. He thinks most of the fish in his canal have already been caught this year.

James Niggemeyer has had better luck bed-fishing. It took him an hour, but he was able to catch a 4-pounder to cull out a 1-pounder for a great morning upgrade. 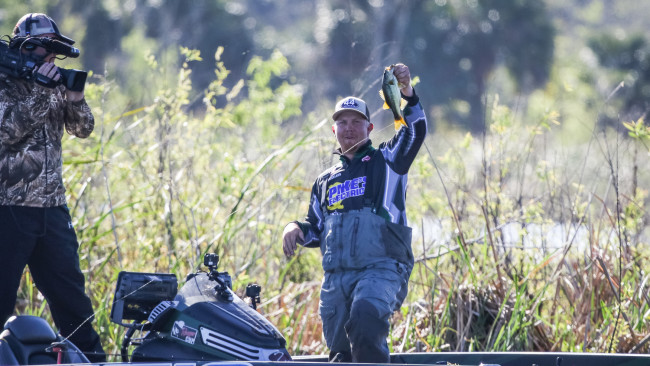 After getting into his "Sumter County attire," aka no shoes, Laramy Strickland caught his second keeper. It's a little 1-pounder.

Stefan and Jared McMillan have both upgraded since the last post. There's a bit of a traffic jam at the top five, with everyone separated by one Florida kicker. 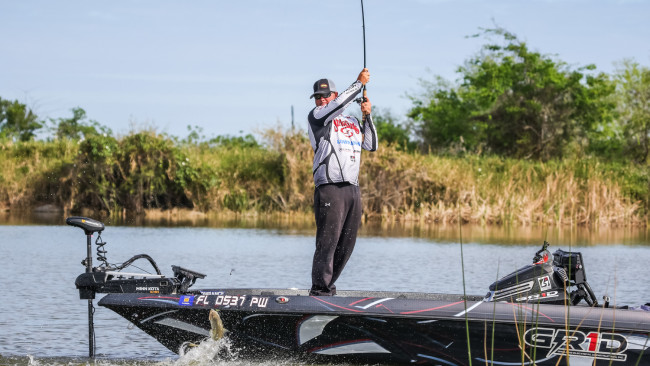 Jared McMillan culled a 1-pounder out with a 3-pounder from a patch of reeds he hadn't previously fished all week.

"If there's that many 3-pound males in here it could go down today. That gets me excited."

Perhaps this warming weather has another batch of spawners headed up to bed.

Jared's brother, Brandon, is also having a good day, with a limit worth almost 16 pounds. They're currently both in the top six. 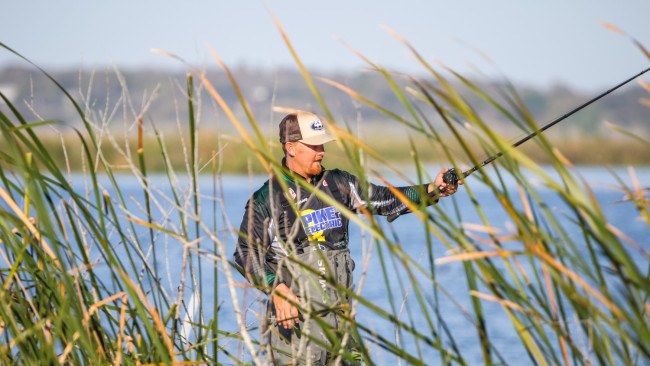 Laramy Strickland landed a 1 1/2-pound bass for his first keeper of the day.

9:42 – Strickland (almost) catches one, Freeman gets ANOTHER giant

Laramy Strickland caught what looked like it was going to be his first keeper, but he decided the 12-incher was just too close to the line to keep and threw it back. Meanwhile, Hunter Freeman caught another magnum toad. It weighed 7 1/2 pounds on his scale. He's got just two fish for 13 1/2 pounds! "I thought that was a 10-pounder when I stuck it," he says. "Those fish came on the same exact cast." He's fishing an offshore shell bed along a breakline.

While we've had several fish caught since the last update, the real story is missed opportunities. Laramy Strickland has missed several fish so far, including losing a 3-pounder. He still has zero in the box. He thinks one of the missed fish was a giant. "They're biting it funny, but they just are starting to bite it," he says. Strickland's luck needs to turn around because these sharks behind him would gladly take his crown. Lance Crawford has also experienced some heartbreak. He lost a 5-pounder that would've been his first fish in the boat.

Jared McMillan had a brief moment of hearbreak when the fish he'd hooked up with wrapped him around some reed. Despite reaching over and trying to dig it out of the reeds, J-Mac couldn't land the fish. A few minutes later, however, he got some revenge with a 2-pounder. He's on the board. 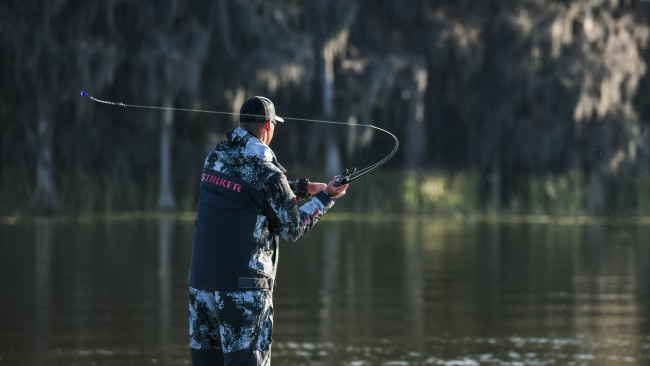 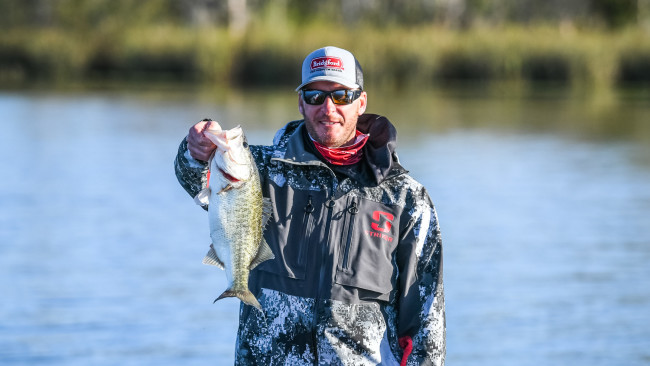 Hunter Freeman just put his first bass in the livewell, and it's a good one – 6 pounds. The bass had a needlefish sticking out of its craw, so we know what the fish are eating in his area.

Matt Stefan is having a good morning, too. He has just three keepers in the livewell that total 10 3/4 pounds. UPDATE: As soon as we made that last update, Stefan caught a 3-pounder to add to his total. He's on a roll. 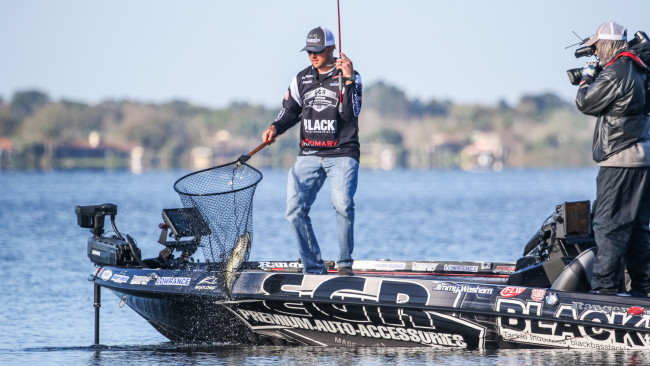 It's sunny, with a light breeze, and overall a great day for catching bass, as you'll see if you check out the FLW Live Leaderboard. The catch reports are rolling in.

Jimmy Washam is having a good morning fishing his jerkbait. He had a small limit but was able to cull up twice, including with a 3-pounder. Nelson has a 10-pound limit, and so does Jacob Wall. And at least two-thirds of the top 30 pros have already checked in with bass in their livewells.

Nothing yet for Strickland.

You've got to watch this: 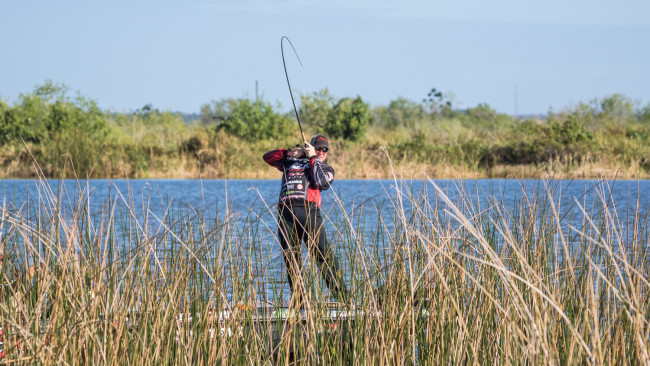 8:22 – B-Mac gets a nice one; everyone has made it to their starting spots

The Apopka crew has arrived and it includes the McMillan brothers and Miles Burghoff. That means everyone has reached his starting spot this morning. Brandon McMillan got on the board pretty quickly with a 4-pounder. If those fish in Apopka are going to chew this morning, Laramy Strickland better be on his game, because Burghoff and Jared McMillan are both within reach of his lead. 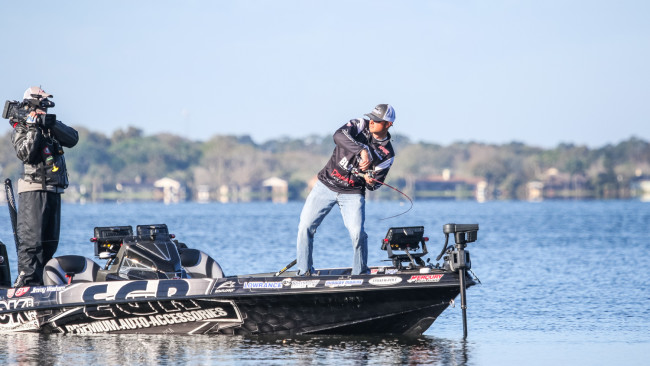 Jimmy Washam and Ron Nelson have a limit each. They're the first two to get five in the boat. Washam caught all five of his on a jerkbait, and though he's got five, it's a tiny bag of fish at less than 10 pounds. Nelson's limit will go for about 10.

The pros fishing Griffin have arrived and should start catching pretty soon. The McMillan brothers are in the Apopka canal, so they'll be fishing before long, too. 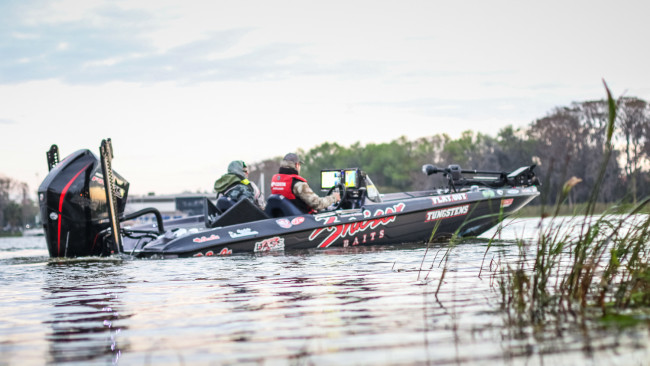 7:30 – About a third of the pros in Harris, a third headed for Griffin

Based on FLW's trackers, roughly a third of the top 30 pros stayed in Harris this morning. Another third are locking through to Griffin. The rest are spread out in the system, working their way toward Apopka or parts in between.

While their competitors are traveling, Erik Luzak, Jimmy Washam and Ron Nelson have each put a couple keepers in the boat. It's nice to get an early start, but as we saw yesterday from Strickland, it's possible to put some gigantic weights in the boat in a short matter of time. What's really important is finding the juice and dialing in the bite.

Here we go. There are big things coming today at the Harris Chain. Whether or not they'll be as big as Laramy Strickland's day-two limit of more than 31 pounds we'll have to wait and see, but today's forecast calls for fantastic conditions for catching some hawgs in Florida. It's supposed to be sunny and warm, with a high of 74 degrees, and only a mild breeze. If there are bigguns on beds, the top 30 pros will find them. If there are hawgs laid up in reeds and pads, these guys will catch them.

The top pros are off and running. Expect a little bit of a delayin the reporting early on as many of them are heading for Griffin and Apopka, which require extensive travel times and navigating locks. We'll keep you posted as they make their way to their starting spots to get the final day of the Tackle Warehouse Pro Circuit presented by Bad Boy Mowers event rolling this morning.