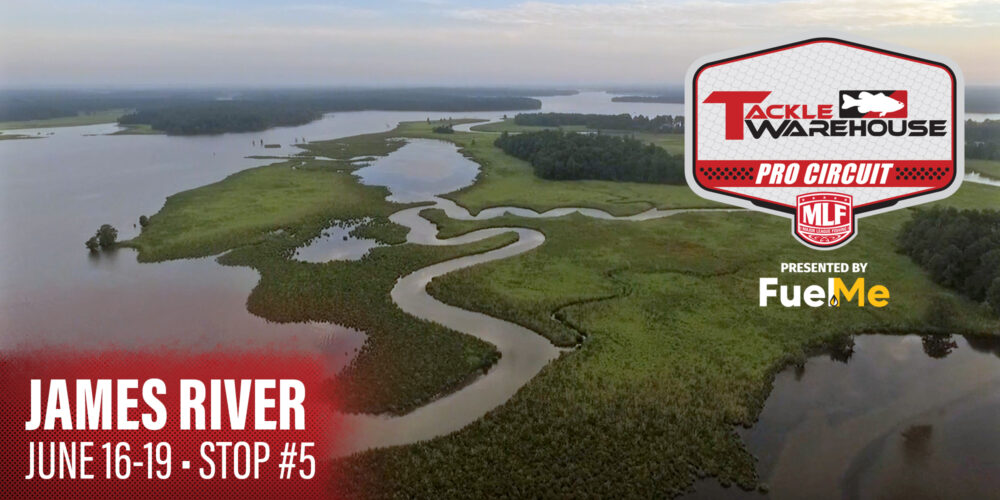 A relatively new venue on the schedule for MLF, the James River should shine new light on tidal waters for the field on Stop 5 of the Tackle Warehouse Pro Circuit Presented by Fuel Me. While the James has seen plenty of bass tournaments on it over the years, the majority of MLF experience is limited to some Phoenix Bass Fishing League tournaments, a handful of Toyota Series events and a Forrest Wood Cup that David Dudley won back in 2003. Any time you put anglers on a relatively new venue that happens to have kicker largemouth pushing 10 pounds, it’s certainly a recipe for success for both fans and pros alike.

A tidal waterway spanning some 340 miles, the James River is formed by the confluence of the Cowpasture and Jackson rivers in the foothills of the Allegheny Mountains in the western portion of the state. Eventually, the river empties into the Chesapeake Bay in the east, which in turn flows into the Atlantic Ocean. As a result, the James River has a higher salt concentration as the river meanders toward the Chesapeake Bay.

In the lower (or eastern) part of the river, anglers will have to contend with the tides as well as some brackish water as they make their way toward the Chesapeake Bay. However, largemouth fishing is excellent here, with plenty of action in old river channels and abandoned gravel pits (upstream from the city of Hopewell) and in larger tributary creeks (downstream from Hopewell). Many of the creeks between Hopewell and Hog Island, with the Chickahominy being the most popular, boast solid populations of largemouth as a result of the abundant shoreline structure such as laydowns, pilings and big swathes of vegetation.

One of the most intriguing things about the James is the fact that it was stocked with Florida-strain largemouth, which is why it can produce fish touching double digits. That, mixed with a good population of bass in general and plenty of habitat, make the James a special fishery.

June can be a tough time on any Chesapeake Bay tributary, but that doesn’t mean the fishing will be a wash. Cody Pike knows the James better than most in the field and though he acknowledges we could hit the postspawn funk, he also knows just how good it can be.

“June is a weird month where fish are getting away from their spawning thing, though it depends on the spring, but you’ll still have some fish spawning because they’ll spawn later in a tidal fishery than in a lake,” Pike says. “There will be a bunch of fry guarders and the frog bite should be starting down in the Chickahominy in the pads. And there should be some postspawn fish getting out on brush, so they’ll be scattered all over from drops to brush to spawning and guarding fry.”

The Potomac River to the north has long been the Pro Circuit’s staple tidal fishery. Anglers fishing in big crowds and rarely running the tide has been what fans have become accustomed to, but Pike points out that the James is a whole different animal.

“You can catch them on high water flipping a marsh bank and three hours later you’ll be looking at the bottom where you just caught one, so timing is way more crucial on the James,” Pike said. “There’s also a whole lot more water to fish than the Potomac because the Potomac is a decent-sized body of water, but it fishes real small. On the James, you’ve got 60 or 70 miles to run that’s all good water, especially if you’re chasing the tide.

“You’ll have guys go to the Chickahominy and commit to it and not chase a tide, but if you run the tide you can catch 60 fish and likely stumble across five big ones.”

One unique thing about the James versus the Potomac is the potential to catch an 8-, 9- or even 10-pounder. While it isn’t commonplace, it’s certainly not out of the question, and seeing bags over 25 pounds isn’t unlikely.

“Spring is way different than the summer, so when the fish start getting into their summer patterns 15 pounds a day is a good bag,” says Pike. “But there’s no telling what you can catch. We had a 30-pound bag weighed in last year. It’s got ‘em in it. Last year I fished a tournament on the James in June and weighed 17 ½ and didn’t even get paid.”

The James is pretty straightforward when it comes to cover available for anglers to fish. It offers both emergent and submergent vegetation, and tons of hard cover, so it’s really a shallow-water angler’s dream.

“Tidal fishing and topwaters just go together,” Pike said. “If you’re not throwing a topwater you’re either flipping or throwing a crankbait. That’s probably what you’ll see a lot of.”

With that being said, frogs, poppers, vibrating jigs, Texas rigs, jigs and shallow-diving crankbaits will be the main focus.

There aren’t many guys in the field with lots of James experience. Because of that, Pike, Todd Walters and Martin Villa should probably be high on the list.

If you’re looking for a guy with a good understanding of tides, Justin Lucas might be your man. He’s got a great track record on the California Delta and Potomac River, and though he hasn’t been to the James much in his career, he does have a Top 10 from a Bassmaster Open on the James back in 2013.