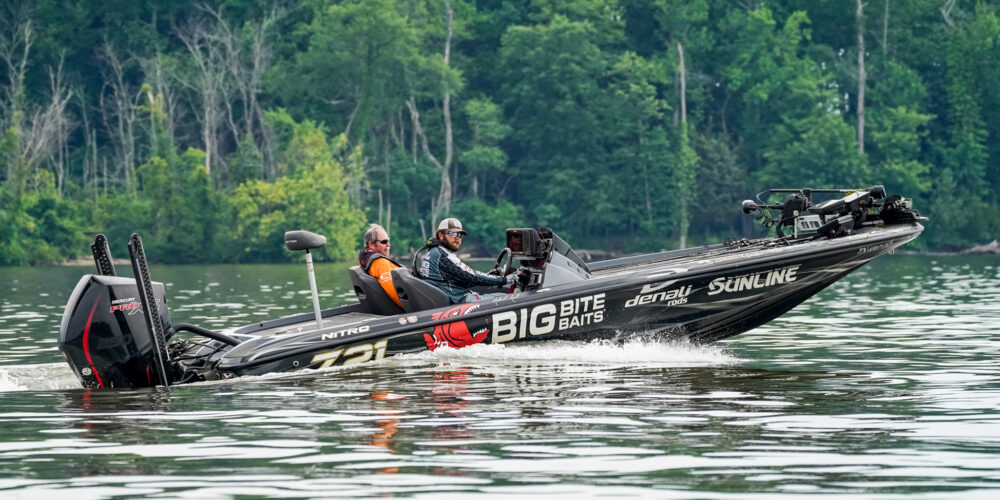 The Tackle Warehouse Pro Circuit Presented by Bad Boy Mowers event on the Potomac River completely flipped the top three in the Angler of the Year standings ahead of the season finale at the St. Lawrence River. Going into the event on the tidal fishery, Cole Floyd had the edge on Skeet Reese and Michael Neal. After finishing second to Jacopo Gallelli, Neal is now in the driver’s seat for AOY with a smallmouth finish ahead.

Neal was making cuts on the FLW Tour while he was still in college, so it’s no surprise to see him contending for the AOY title at this point in his career. Historically snakebit when it comes to wrapping up a win, Neal has been the model of consistency this year, notching a pair of top-five finishes and never finishing below 33rd.

“That would definitely be the highlight of my career by far,” says Neal of the chance at the title. “I’ve never won a tournament either, but I would rather win Angler of the Year than win a single tournament, even though it pays less.”

With a 21-point lead over Reese and a 31-point edge on Floyd, Neal will have to fish well to win the title, but it isn’t so close that he needs to be fishing on the final day. Additionally, he’s not going in totally blind to the St. Lawrence, though the patterns in play are likely to be quite different, Neal is about to fish a Bass Pro Tour event on the big river where he will learn a lot regardless of his performance.

“Smallmouth are definitely not my forte by any stretch, but it should be deep fishing by then, and that’s the way I’d rather do it,” says Neal, who is undoubtedly an offshore expert. “It’s going to take a good finish, nobody has had an off tournament. Between us three, the worst finish is whatever Cole [Floyd] finished in the last one. For me, I won’t feel safe unless I finish in the top 20.”

If he can notch a top 20 and close out the title, Neal thinks he’d have a chance to level up.

“I’m established, but I’ve never won anything,” says the soft-spoken pro. “I feel like it would still solidify my career, even though I’ve been doing it for 9 or 10 years now. I feel like it would definitely put me on the radar a lot more than I am, because I’m not one of those guys that’s very outspoken or anything like that. I just fish and do my thing and go home, so I think it would put me on the radar more. “

In the past, Neal has nearly won the Forrest Wood Cup, lost the fish to win FLW Tour events and been in the hunt in many a Bass Pro Tour event. For all that, he’s got over $1 million in earnings and no win above the Phoenix Bass Fishing League level. Come the end of July, three good days of fishing could finally give Neal the big win due to him.

Still having a truly fantastic season, Reese had his worst finish of the year at the Potomac, sputtering after making the cut to fish Day 3 and ending up in 43rd. With Reese still very much in the running for an AOY title, the question now might be if he pursues it.

A more than capable smallmouth angler, Reese should do just fine in any event up north. But, a pre-scheduled family vacation has him set to be in Europe during the final Pro Circuit event of the year. With the points as they are, he could likely skip it and still make the Tackle Warehouse TITLE, but he’d be tossing away his hopes of an AOY title. On the other hand, he could fly back to New York a bit early and chase smallmouths.

One thing is for certain – his competition wants him to be there. After confirming he had the lead at the Potomac, one of the first things Neal said was that he wouldn’t want to win if Reese gave it away.

For most pros, a $10,000 check and a 57th place finish isn’t a bad thing, but it may have marked the end of Floyd’s AOY dream. Though he didn’t do poorly at the Potomac, Floyd’s showing was tough enough that both Reese and Neal passed him up in the standings, turning the season finale into an uphill battle.

To win AOY now, Floyd will likely need a superlative finish at the St. Lawrence. Contending for AOY in just his second year as a pro is already a great accomplishment, but Floyd would likely prefer to win than come close.

Considering the odds he faces, a win now would be an incredible story, but there are a few things that may work in his favor. One is the uncertainty of Reese’s plans, the other is the fact that he’s not going into the St. Lawrence totally raw. Floyd had a great finish in the Super Tournament out of Sandusky last year, and he did that by running into the Detroit River and flipping for largemouths. Typically, green fish don’t play much on the St. Lawrence, but if anyone can figure them out enough for an AOY win, Floyd has got to be on the shortlist.

Could a Comeback Happen?

Past the top three, the odds of a comeback are pretty long. Justin Lucas and Ryan Salzman both have 824 points, which has them 110 points behind Neal. Since 2012, Neal has finished below 110th just twice on the FLW Tour or the Pro Circuit (though to be fair, he didn’t fish in 2019 and didn’t fish a full season in 2020). Now, Lucas has a knack for wining smallmouth derbies, and Salzman is pretty dangerous too, but they’d still need to get monumentally lucky to pull off the title.