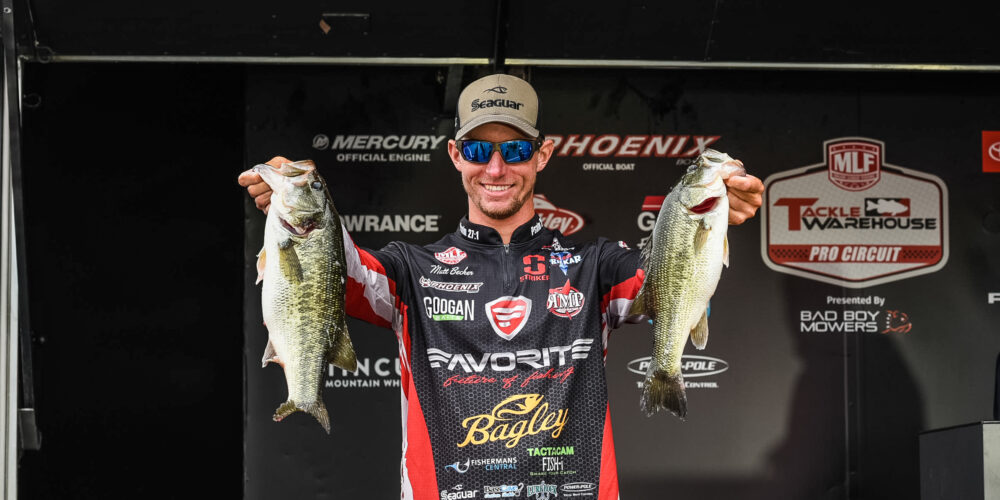 Let’s be honest, this tournament is now Matt Becker’s to lose.

With more than a 7-pound lead going into the of the Tackle Warehouse Pro Circuit Presented by Bad Boy Mowers event on Lake Murray, Becker has firmly set him apart from the rest of the field. While most of the guys behind him going into today struggled, Becker once again managed to hit a couple herring-spawn flurries to sack up 17 pounds, 8 ounces and bring himself to 58-10 total.

And here’s the thing, if the forecast of gorgeous, sunny weather holds for tomorrow (aka. ideal herring-spawn conditions), there may be no way for anyone to catch them. Then again, with the big names behind him and the risk/reward style Becker is fishing, anything can happen.

“It doesn’t matter to be leading now,” says Becker. “There are some of the best fishermen in the world behind me. You have [Anthony] Gagliardi. You have the hottest fisherman in the world right now in Michael Neal. There’s some hammers right there behind me.”

There’s also a hammer leading the tournament; the 2018 Rookie of the Year who continues to make the most of his “risky business” pattern.

All week, Becker has truly had no idea where, when or if he’ll get a bite. He knows the fish are there hanging off the edges of the points, but unless they move up shallow, he hasn’t been able to catch them. And he has no idea when he pulls up on a point if the fish have moved up, as the fish are not schooling visibly on the surface but just “schooling” and feeding up shallow.

When the fish are there, though, he usually gets right in a hurry. That held true again, today despite today’s clouds, rain and wind making things tougher.

“I didn’t catch many, and I caught a lot more small ones today,” says Becker. “I only had two kind-of flurries where I caught three in three casts right before the last storms hit this afternoon. And I caught three in 10 minutes in the morning, but it was not as hot and heavy as it’s been. I think it was the weather. Hope it was, at least.”

It sure was for most pros, as many anglers, once the rain started around late morning, failed to get a bite let alone upgrade. Derrick Snavely is sitting in second despite only bringing in four fish today, and all of them came before the rain. Likewise, Neal and Gagliardi both brought in two of the biggest bags they sacked up before the rain.

“Once it started raining hard, it was basically wasting time out there,” says Becker.

The other stressor for Becker today was fishing pressure.

“It was kind of crowded [on the points today], and I got in a bad rotation,” says Becker. “There was a boat on a lot of the spots I wanted to fish. Fortunately, we cut 40 guys after today. So hopefully that opens the lake up a lot more.”

So, he survived the weather/pressure hurdle of day three, and the forecast and cut-down field algin perfectly for what he’s planning for Sunday. It’s just a matter of Becker closing it out.

“I can’t look in the rearview mirror,” says Becker. “I just have to go out and do my thing. All that matters is if I catch them, they’ll really have to catch them to pass me. So Hopefully the sun pops out, they bite, and I sack up another 17 to 20 pounds to seal the deal.”