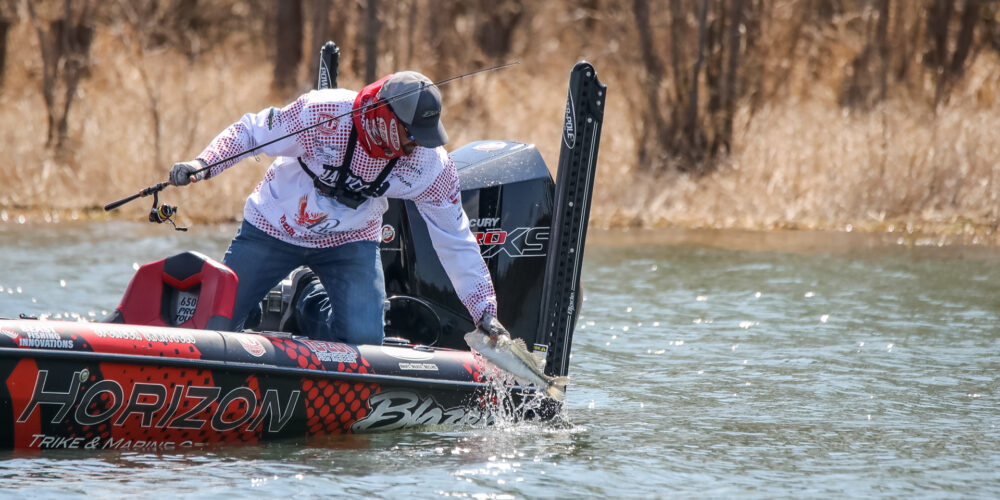 So far, so damp, seems to be the report from the first day of practice for the Tackle Warehouse Pro Circuit Presented by Fuel Me season opener on Sam Rayburn Reservoir. The whole field hit the water Monday (some earlier than others) to start practicing for the Guaranteed Rate Stop 1 Presented by Ark Fishing on a chilly and damp Texas day. Both owning past success on Rayburn, we chatted with Joey Cifuentes and Spencer Shuffield to get a bead on how things are shaping up.

Reporting water temps in the low 50s, Cifuentes wasn’t particularly enjoying his first day on the water in Texas.

“The weather sucks, and the fishing is not the greatest either,” Cifuentes explains.

The Arkansas pro says he’s ready to get the ball rolling on Thursday, despite not coming down for any pre-practice.

“I didn’t do it because I’d been on the lake a bunch of times and it seems like it’s always the same this time of year,” he says. “I don’t regret it, the way I fish here, I’m ready to start the tournament. I just try to hit a bunch of spots and hit five places where I might catch a big one.

“I think it’s going to be a tough tournament,” Cifuentes muses. “They had a team tournament the other day, and it took 28 pounds, and the weights weren’t bad. I don’t know what the weather is going to do, if it’s sunny and the fish are happy I think there could be some big bags. But, when you’ve got 150, 160 guys on this lake, it’s going to be tough unless you land on a spot where there’s two or three big ones and they all eat.”

Shuffield finished 28th in the Pro Circuit event on Rayburn in 2020 and also did well in last year’s Bass Pro Tour Stage held on Big Sam. According to him, things are pretty good.

“It’s pretty much like you would think,” Shuffield says. “You can catch them up in that 3- to 6-foot range pretty well, but it seems like most of them are backed off into that little bit deeper range. When I was here earlier, there were a lot more up shallow. There were thousands of them out deep, but they were all small. Every now and then you could catch a 2- or a 2 ½-pounder, but the quality fish were shallow. Now, it seems like there’s more quality in that deeper range.”

Reporting 52-degree water on his graphs, Shuffield says the fish bit well on the first day of practice despite the rain.

“They’re healthy lookin’, very healthy,” he says. “But, real white, very pale. The water isn’t very dirty at all, I think maybe this front today has them up and biting. Maybe they pulled up a little shallower than normal. I came down before the cutoff, and the fish had a lot more color to them than the ones I’ve caught today.”

Based on Shuffield’s report, you might want to put him on the squad. When asked, he didn’t proffer any names really out there as good picks, sticking with the top of the Angler of the Year leaderboard, John Cox and some Texas sticks as his choices. That said, Shuffield does say that Grae Buck and Matt Becker could be good picks because of their good history on Rayburn, even if their Pennsylvania addresses don’t exactly line them up as favorites.

“Rose did really good on a Carolina rig one year, I would pick him, I think this is going to be mostly an offshore tournament, so I think he could do good,” Cifuentes says. “And, I met a kid at the dock this morning, Blake Hall, and he seemed like a nice kid, he’d be my wild card.”