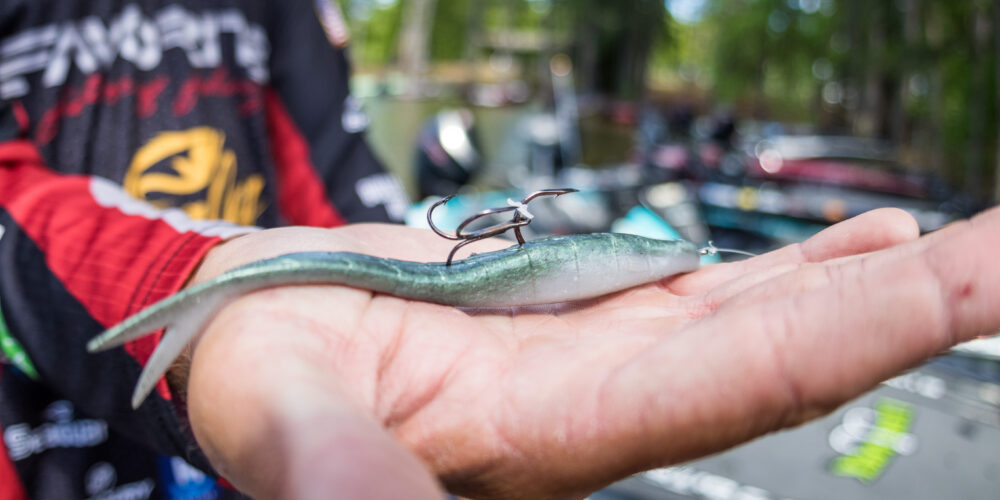 Herring spawn or bass spawn, anglers were dialed in to one or the other this week on Lake Murray.

It seems the entire lake and both major tributaries were in play as the pros in the Top 10 of the Tackle Warehouse Pro Circuit Presented by Bad Boy Mowers were able to focus on one or sometimes sample both to get ahead.

Here’s a look at the lures that helped the Top 10 anglers:

1. Matt Becker’s first Pro Circuit win came thanks to a herring-spawn pattern. Running around hitting points and hoping to time things just right when bass would move up to school on herring, the 2018 Rookie of the Year rotated through a number of different soft plastics, with a Googan Baits Dart (green gizzard) with a treble hook trailer as a key player. He threw that on a 7-foot, 5-inch medium-heavy Favorite Fishing Hex rod, Favorite Fishing Soleus XCS reel and 15-pound test Seaguar InvizX.

2. The pre-tournament favorite, Anthony Gagliardi got on the herring-spawn pattern a day too late and still nearly pulled off the come-from-behind victory. Cycling through dozens of main-lake points, Gagliardi says he threw a lot of different things, but a Berkley PowerBait Power Swimmer on a 1/16-ounce head was his biggest player, with a Sebile Magic Swimmer and a double-soft-jerkbait rig also getting the call often. He threw the swimbait on a 7-foot, medium-power Level spinning rod and Abu Garcia Revo MGX reel rigged with straight braid to short Gamma fluorocarbon leader.

3. Michael Neal was all over the map with his patterns this week, and his lures showcased that. He started the event tossing a wacky-rigged Big Bite Baits Fat Stick under dock walkways. On Day 2 and beyond, he was on the herring-spawn pattern early, catching fish on a 5-inch Big Bite Baits Jerk Minnow (pearl white) thrown on a 7-foot, 4-inch, heavy action Denali N3 Series rod and 8.1:1 Daiwa Tatula reel spooled with 16-pound-test Sunline Sniper fluorocarbon. Come the afternoons, he was running up the Little Saluda River to target laydowns with a Z-Man ChatterBait Jack Hammer (white and chartreuse) with a Big Bite Baits Kamikaze Swimon (white) trailer thrown on a 7-foot, 2-inch Denali Kovert Lite rod, 6.3: 1 Daiwa Tatula reel and 20-pound test Sunline Sniper fluorocarbon.

4. It was all about speed for Adrian Avena, as he maximized time while hopping between 50-60 points a day by utilizing an Abu Garcia Revo Rocket reel while throwing a Berkley Highjacker (chrome black back), on an Abu Garcia Winch rod. He also mixed in a lipless crankbait and a Carolina rig with a finesse worm on the points.

5. David Williams’ pattern this week was for the birds, literally. With no plan, four herons on a point keyed him into where the shad and herring were on Day 1. His main weapon of choice was a homemade spinnerbait (white and chartreuse with gold and silver blades) with a Zoom Split Tail Trailer thrown on a 7-foot Cashion ICON Series medium-heavy rod with 15-pound test HI-SEAS monofilament line. Yet, he also caught some fish on a jerkbait, frog, swim jig and a number of other lures.

6. Details matter when booking back-to-back Top 10 finishes as Tai Au just did. Focusing on the first third of the spawning bays, he would toss a Yamamoto Saltwater Ika on a drop-shot to spawners. Otherwise, he looked for old, wooden docks to skip a Yamamoto Senko. He also mixed in a ½-ounce Z-Man ChatterBait Jack Hammer with a Yamamoto Zako trailer.

8. Possibly the most unique pattern of the week, Cody Huff threw a Rapala X-Rap Prop on the edge of the bank grass up the Little Saluda River. He threw the topwater on a 6-foot, 8-inch Bass Pro Shops Johnny Morris Signature Series rod and Johnny Morris Signature Series reel spooled with 50-pound-test Bass Pro Shops braid. He also mixed in a Missile Baits D Bomb and a Yamamoto Senko, which he’d flip around shallow docks. Running windy points back down the lake with a Rapala Shadow Rap jerkbait helped him fill out his limits on the last two days.

9. Derrick Snavely milked a two-pronged approach for the majority of the event. Up shallow, he targeted fry guarders in 6 to 7 feet of water with a V&M J-Mag Worm (green pumpkin) on 1/16-ounce shaky head. Then he’d go back out the points to chase herring eaters with a myriad of lures, most notably a vintage Bomber Long A as a wakebait and a 4.8-inch Keitech Swing Impact FAT.

10. Skeet Reese kept things simple, dialing in on deeper docks and bank grass with a Berkley PowerBait MaxScent Hit Worm on a drop-shot. The California pro also mixed in some sight-fishing, a big swimbait and a few other moving baits.