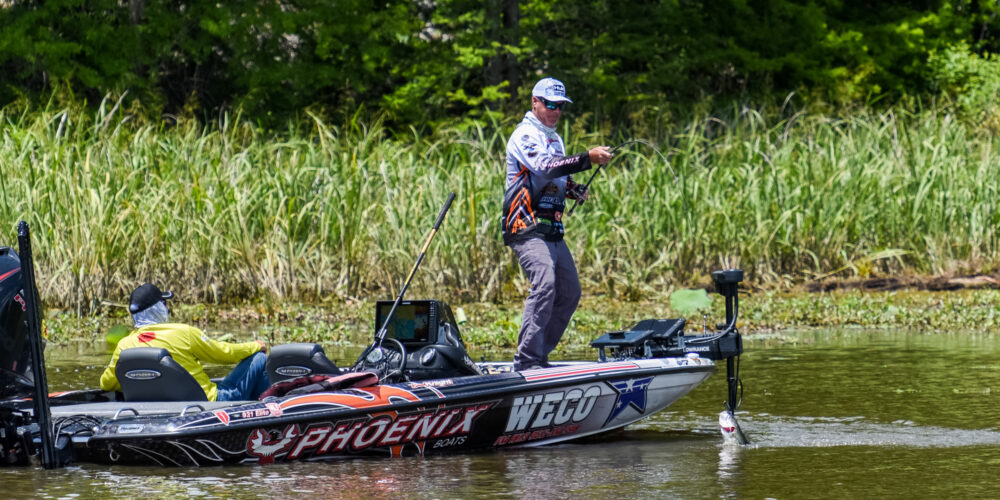 EUFAULA, Ala. – Whenever there’s a professional bass fishing tournament on Lake Eufaula in Alabama, there’s always the tournament within the tournament. In addition to pros fishing against each other, the lake works against itself through the pros plying its waters.

Will deep or shallow be the deal? Will it be won up the river or down the lake? Will the bank bite last or will the brush pile bite go the distance? For bass anglers, there’s a never-ending intrigue in the dichotomy of shallow versus deep at historic Lake Eufaula.

After two days of the Tackle Warehouse Pro Circuit Stop 4 on the famed Southeastern impoundment, the shallow bite up the river seems to have a solid boat length on the deeper brush piles down the lake. Of the top five leading anglers, four are getting it done on the bank of the river. Here is a look at how they’re doing it.

After weighing 20 pounds, 3 ounces on day one, Jason Abram backed it up with 13 pounds, 5 ounces on day two to hold his ground in second place.

Abram is running long portions of the river looking for a specific combination of wood and grass. He’s identified about a dozen small areas with the perfect blend along a 15-mile stretch of the lake. In all, he runs about 30 miles of the river to fish about 14 places. In a day’s time, he can usually make his milk run of sweet spots four times.

“It’s a risky pattern because I might run seven or eight miles to fish one certain spot and there might be a boat near it,” Abram says. “But instead of pulling up in front of a guy and cutting him off, I’ll let it go and run several miles to the next one. Sometimes I make the lap and get to fish all the places, but sometimes I might make the whole lap and get to fish only seven or eight of the places.”

Trevor Fitzgerald is the only pro in the top five representing the offshore contingent. He’s fishing offshore cover, but not all of it is big elaborate brush piles. In fact, most of his best covers are smaller objects like little pieces of brush and submerged laydown logs.

“I found some big piles in practice, but it seems everyone finds those and other people are always fishing them,” Fitzgerald says. “I started looking for more obscure, overlooked objects that might only hold a fish or two instead of a whole school.”

All total, Fitzgerald has about 20 such pieces of submerged cover. He rotates through his milk run several times a day. But he is pleased in knowing that he hasn’t seen another boat on any of the same pieces.

“Each time I pull up on one, I start with a lure I know won’t get snagged and mess the cover up,” he says. “The first couple of cast are the most critical ones for getting a bite and I don’t want to hang up in it right off the bat.”

As he progresses through his lures, Fitzgerald moves more towards reaction baits with treble hooks to try to provoke a strike.

Brad Knight started the day in ninth place but moved up to fourth place on the strength of a 15-pound, 2-ounce limit today.

Knight originally had plans to fish shallow early and then run brush piles in the afternoons. But he’s found the shallow bite to be good enough to just stay with it all day long. On Day 1 he caught about a dozen keepers; Friday, he said that the over all bite was much better, catching some three dozen keepers. Many of them were small, but staying bit is what makes him stay in the area.

He’s fishing one location in the upper end of the lake and has found the fish to bite in windows.

“I’m pretty much fishing one general area,” Knight says. “Within the area is a super sweet spot that I visit several times a day. Whenever some clouds roll in and the wind picks up for a few minutes, I’ll run to that juice spot and catch a few keepers off of it. If it gets bright and still, I’ll move out of the area, let it rest and look for other stuff.

Skeet Reese is having a fantastic year on the Tackle Warehouse Pro circuit in 2021. After a win at Okeechobee and another top 10 at Murray, Reese sits third in the Angler of the Year points race.

Reese brought his momentum to Eufaula where he is having another great event and headed possibly for yet another top 10. He, too, has found a rhythm with the main river that is to his liking.

“I’ve got a little 50-foot stretch of bank up there where the shad are spawning,” Reese says. “I caught three there pretty quick this morning. After that I’m running a pattern that includes a certain combination of grass that seems to be where the fish want to be.”