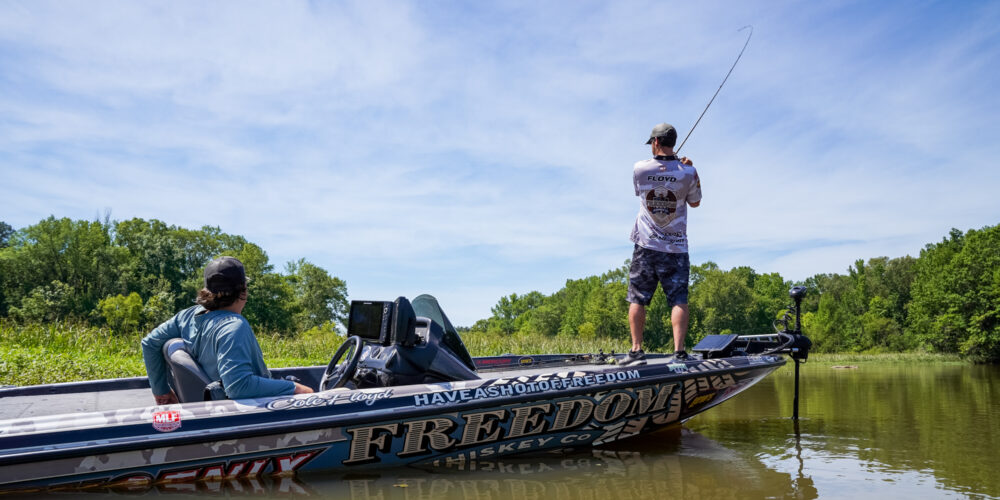 Trevor Fitzgerald leads the Tackle Warehouse Pro Circuit Presented by Bad Boy Mowers event on Lake Eufaula and has done much of his work on brush piles in the lower lake. Behind him is a regiment of river runners who have made the Chattahoochee River work for them all week. Today, the river proved it still has some bass in the tank to make it to the finish line. Here’s a look at how those fishing the upper portion of Lake Eufaula plan to catch the leader tomorrow.

Jason Abram reignited his river bite today with a strong 18-pound, 11-ounce limit to lock down second place for the third day in a row. He’s making the river work by fishing Eufaula, “the East Tennessee way.”

“Back home we fish a lot of steep bluffs in current with a white jig during the shad spawn,” Abram explains. “But instead of casting it out and swimming it up top, we pitch it to the bluff walls, let it sink down a couple of feet into the eddies and current seams and then hop it hard for a reaction bite. And that’s pretty much what I’m doing here at Eufaula.”

The Chattahoochee River does not have nearly as many vertical bluffs as Tennessee reservoirs, but Abram is making his homegrown pattern work on a handful of places. Several of his places are channel swing banks with shade or wood mixing with the current.

“I have to run and gun a lot of water to hit just a few places,” he says. “I fish each one four or five times a day and only fish it for 3 or 4 minutes. If a fish is there, it’s set up in that current ready to pounce on whatever shows up. So those places don’t take long to fish.”

For the week, Walker has been fishing, well, quintessential Walker: pitching a jig to anything shallow, mostly in the upper and mid-section of Eufaula. The main thing he looks for is, “places where there aren’t any boats.”

“There were so many boats up there, I finally had to start running away from them all to get some fishing space,” he says. “If I could find a good looking stretch all by itself, it usually had a fish or two on it.”

Walker only had four fish for about 7 pounds at 2 o’clock this afternoon. With an hour left to fish, he started back down the river and came to a section that was void of boats.

“I pulled in and made a pitch and caught a 4-pounder to finish my limit,” he recalls. “Then I made another pitch to the exact same spot and caught an 8-1/2-pounder, which culled a line burner. I went from 7 pounds to 20 pounds in two flips; it was crazy.”

Bobby Lane, who led the first two days, slipped to fourth place with 11 pounds today. Lane returned to the well up the river this morning, but the well had gone dry.

“There were a lot of boats up there this morning,” he says. “The banks were already pretty muddy when I got up there. I tried a spinnerbait and a swim jig for a couple of hours, but never got a bite. So I ran to a pocket, starting throwing a frog and pretty much caught what I weighed on a frog.

“My problem now is I don’t really know what to do tomorrow,” he adds. “I think it’s pretty much toast up the river – they’ve been beating on them pretty good up there. So I might just go fishing down the lake and see what happens.”

Rising star Cole Floyd climbed to his best position of the week with a 13-13 catch on Day 3. Floyd, too, is running shallow stuff in the river to catch his fish.

“I’m probably focusing on current more than anything,” Floyd says. “If I can find the right combination of current and hyacinth, I can pretty much call my shot, but there really is not much of that mixture to be found. Once I run up that river to certain point, the hyacinths run out. So I’m having to repeat on water more than I would like to.”