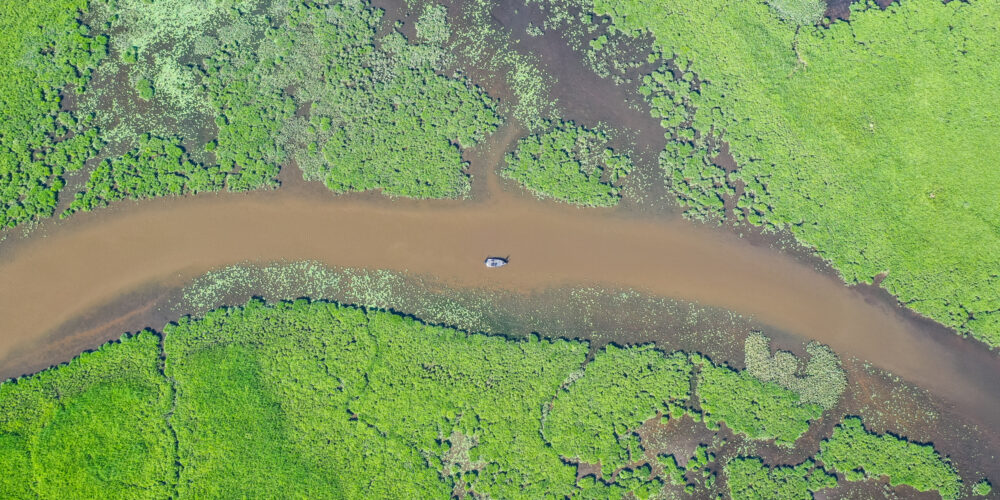 Day 1 of the  Tackle Warehouse Pro Circuit Presented by Bad Boy Mowers on the Potomac River was about as good as it gets on the historic tidal fishery. Shy of a great frog bite or a 20-pound bag, the pros put it to ‘em to kick off Federal Ammunition Stop 5 Presented by Lucas Oil. In all, 23 pros put 15 pounds or better on the scale, and the mark for 50th place is a whopping 13-13 brought in by Cody Pike. At the top, Lawson Hibdon cracked 17 pounds and the rest of the top five (really the entire Top 10) are right at his heels heading into Day 2.

With the fishing as good as it was, about everything was working on Day 1. Very few pros ventured far north toward Washington, D.C., but plenty of pros caught fish in the rest of the river about every way you can think of. From some on a frog to hard cover and grass bass, the top pros have a lot going on this week.

Here’s how the top pros are getting it done.

In the hunt for his first Top 10 since 2013 and his first win ever with MLF, Zell Rowland had a banner day to kick things off.

“I probably caught 30 fish all day, so I’m in an area where there’s a lot of fish,” says Rowland. “I don’t know why they’re there, other than there’s fresh water probably running in from the rains they’ve had here, and there’s a lot of grass, a lot of milfoil and hydrilla mixed.”

From the sounds of it, Rowland basically caught fish at will, doing all his damage shallow, as one does on the Potomac.

“It’s real easy to catch ‘em, I can tell ya that,” says Rowland. “It might be hard to catch another 16 or 17 pounds, but I only lost one fish all day, and I was able to pretty much catch ‘em all day long. I left the area around 1:45. I decided I’d leave and just head back, and I was able to catch a few more fish on the way back.”

One of the veterans of the Pro Circuit, Rowland has had a few trying years on and off the water, so he’s happy to be catching them now.

“Some of the practices I’ve had would have been awesome if I caught them on the first day of the tournament,” says Rowland. “I sort of tried to change up what I’ve been doing over the last few years, especially when I’m coming to a lake I know. I’ve been to all these lakes multiple times, and you get really hung up on fishing past experience. I told myself when I came here that I was going to go fish like I’d never fished here before. I was able to find a lot of fish, and I could have caught them every day – the last day of practice I could have had 16 or 17 pounds. I’m excited to go do it again tomorrow.”

Tallying a solid 16-14, Joey Cifuentes is back on the horse after a disastrous event at Eufaula.

Winding in grass like you’re supposed to on the Potomac, Cifuentes fished Day 1 perfectly.

“I had like four places I got some bites on, and I went there, and I hit them all at the right times, luckily,” says Cifuentes. “I’m throwing one bait, a moving bait, and I caught all my fish on that. It was really good.”

The potential stumbling block for Cifuentes is the ever-changing tide, but he thinks he may have a handle on that. He certainly did on Day 1.

“I think maybe I learned the right times today,” says Cifuentes. “But, who knows what will happen tomorrow.  Maybe I got lucky, but here it’s all about timing. I planned where I wanted to go based on the tide, and I think it worked.”

Lacking a true local in the field, Adrian Avena is about as close as it gets this week. With years of experience on the river and an intimate knowledge of how to fish northern grass and tidal water, Avena got himself off to an excellent start. Still, it wasn’t perfect, and considering he weighed a 5-9, he could have had a mega bag with one or two more good bites.

“I started off on an area I like on low water, and I was like one for four there,” relays Avena. “Then I came local and started fishing around and caught about 12 pounds local. So, I made a run to an area where I shook a couple good ones off and I caught that 5-9 and another one about 3 pounds. After that, I ran around.”

Running around took Avena from D.C. to south of Potomac Creek, but it didn’t cull him up at all.

Catching his two biggest off hard cover and the rest of his limit in grass, Avena is looking dangerous going forward. If he can get a couple more big bites the rest of the week, he might be headed toward his first win at the top level.

With no previous knowledge of the Potomac, it took Justin Cooper a little time to get comfortable, but once he did things happened fast.

“I hit a couple spots at the wrong time, fished around, then I hit a spot where  I got one bite in practice, caught four and culled there,” says Cooper. “Then I fished around, realized the tide was falling pretty fast, and ran to one creek.”

Easing into the narrow creek mouth, Cooper saw everything spilling out into the river. Still, he went up it to fish.

“I pulled in there, and the tide was a lot lower than I thought it was going to be,” he says. “I got there and catfish were swimming by me left and right. I’m looking at a cat, and I fired my bait out there and loaded up and it was a 2-pounder that culled out a little one. I kept going back, I thought maybe it was too shallow, but it looked like it got a little deeper, and I pulled up there and actually picked up a frog and caught my third biggest under a laydown.”

With a mix of creek fish and grass bed fish to his name on Day 1, Cooper has some decisions to make on Day 2. Still, he’s feeling a lot better than he did with one in the box mid-morning.

Winding in grass, Terry Bolton has a shot to do something he’s never done before on the Potomac – get paid.

“I looked the other night to see what my highest finish was here, and I think it’s 90th,” says Bolton. “Historically, I’ve never drawn a check here in my career. Hopefully I can break the jinx.”

Winding around, Bolton fished clean and just like you’re supposed to on the Potomac.

“I threw stuff with skirts, that’s my motto,” says Bolton. “I just picked through three or four different areas. I moved around a little more than I normally do, and I caught everything that bit. I don’t know what tomorrow will hold, so I figured I’d better catch as much as I can today.”