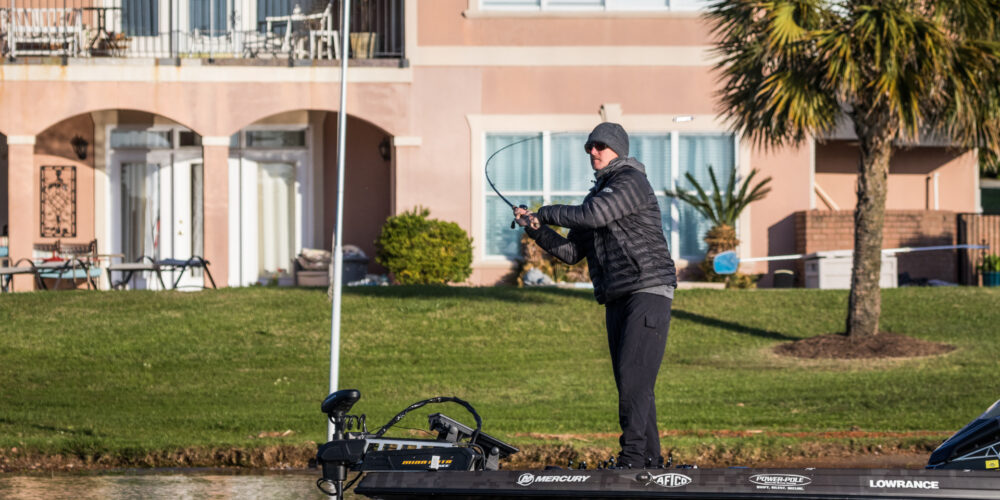 There was no one way to the top of the leaderboard on Lake Murray. But one thing was for certain, to be ahead at the Tackle Warehouse Pro Circuit Presented by Bad Boy Mowers event, you better have had a kicker or two.

Both leaders Tommy Dickerson and Clabion Johns had two fish over 5 pounds, with Johns having a 6-5. The same went for the rest of the top five, who used kickers (or near kickers) to separate themselves from the rest.

Matt Becker’s separator was a 6-6 he caught around 1 p.m. Then again, he was just happy to catch any fish with what he’s doing.

“Honestly, I could’ve zeroed today,” says Becker. “I could zero tomorrow. The way I’m fishing is very risky. I was very fortunate my timing was right today and I was able to put five good ones in the boat.”

While he caught 12 to 15 keepers, they all came in three short flurries when he happened to show up on the right point when the fish were schooling. Hence, the luck of timing.

“It’s all timing,” says Becker. “It’s being there for the 5 minutes to make two or three casts in a row to catch what I can. I re-hit a few spots, including one I didn’t catch anything on in the morning and then an hour later I hit a flurry. It’s about being at the right place at the right time. So today I was blessed.”

Technically, Miles Howe didn’t have a kicker, though he lost a 6-pounder. Instead, he had a bunch of near kickers to get over 20 pounds. And he caught them a myriad of ways.

“I have a couple different patterns I’m running,” says Howe, who stayed toward the lower end. “I have a herring-spawn pattern. I’m working on some spawning fish, though not sight fishing. They’re up on beds I can’t see. I also have a point with a ton of fish coming up on it. Basically, I have a lot of rods on the deck.”

While many anglers in the lower end really struggled with the cold morning, Howe says he caught fish from sun up until he came in for weigh-in. It was just a matter of adapting to the conditions.

“First thing, I was fishing a moving bait fast,” says Howe. “Then I slowed down when the sun got high and then as soon as the wind picked up, I changed again. I’m just trying to be really versatile.”

Not only did Dean Rojas have big bass for the day (a 6-12 largemouth), he did it with flair.

“The big one was a blind-cast deal, and it was epic because she got me hung on a stump,” says Rojas. “She was pulling so hard she took me to a stump. I could not move her. Then, all of a sudden, she started moving and I grabbed the net. It was a nice gift this morning.”

As for the rest of his day, Rojas says he moved around a lot today trying to key on bigger fish. Fishing mid-lake, Rojas started on a herring-spawn bite but also worked in two or three other things, “rifling through stuff,” as he put it.

“Today was all about trying to get to the front because the weather is going to change things,” says Rojas. “I don’t know if they’re going to be there with the weather this weekend. So today was a good start.”