PREVIEW: ‘Blowing Through’ Sudden Death Round 1 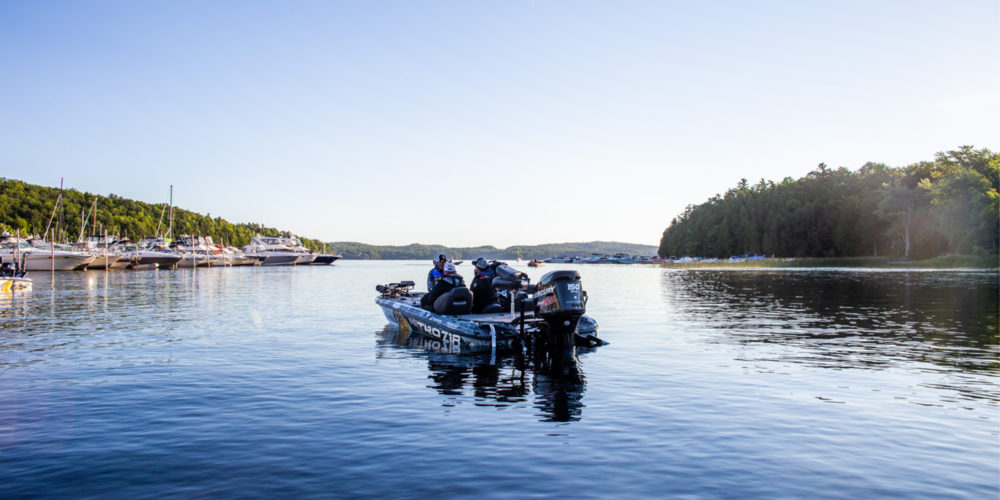 COLCHESTER, Vt. – Everything was brand new to Major League Fishing Select pro Brandon Coulter as he pulled into the Malletts Bay boat ramp on Lake Champlain to begin the Sudden Death round for the MLF Challenge Select. Coulter had never been in a Sudden Death fishing match before and he had never fished inside Malletts Bay either. But none of that mattered to him. He didn’t care that the cut weight had been set at 28 pounds; he didn’t really even need to study his zone map, which was restricted to inside Malletts Bay. In fact, Coulter even made it known that he did not need the ride-through period.

“I already know exactly where I’m going to start and what species I’m fishing for,” Coulter said with a calm, matter of fact tone. “As soon as they blast us off for the ride-through, I’m running straight there, poling down and waiting for the lines in call.”

Coulter’s crystal clear plan revolved around some of Lake Champlain’s most potent fish attracting features: “cut throughs” or “blow throughs,” in the old railroad line that closes off Malletts Bay. The thin manmade riprap wall that divides the Inland Sea and Malletts Bay from Champlain’s main lake features a couple of cuts or gaps to allow for boat traffic to pass from one side of the lake to the other. Given the two massive volumes of water the wall holds back on either side, there is always some kind of current “blowing through” the cuts. The current is ubiquitous, sometimes flowing one way, sometimes flowing the other. But again, Coulter didn’t really care which way it was flowing.

“All I know is it creates current and smallmouth love current,” he explained.

Coulter admitted the possible flaw in his game plan was giving up his ride through and scouting time in a zone he has never seen before.

“If they’re not biting on that cut through, then I might be in trouble,” he said. “But it’s worth the risk. There are always fish in cut throughs on this lake and if they’re piled in there good, I could be out of here in the first period.”

“The only problem is they are not a secret; everyone in this group probably knows how productive they are,” he added. “And I bet I’m not the only one with that plan.”

Coulter would be right. MLF Select pro JT Kenney had already sketched out the same strategy in his mind. He had fished Malletts Bay before and knew exactly where he would start.

“I think there are actually two passes through the riprap in this zone, but I know which one is the better one from experience,” Kenney said. “I’m running straight there and I will sit there for the whole ride through time until the first period begins. Those spots are literally like forage conveyor belts bringing food to those smallmouth. And with it sunny like this – those brownies should be chomping.”

As for the 28-pound cut weight, Kenney only chuckled at it.

“Is there a Waffle House around here somewhere?” he asked. “I’m thinking I’ll be looking for breakfast around here before too long.”