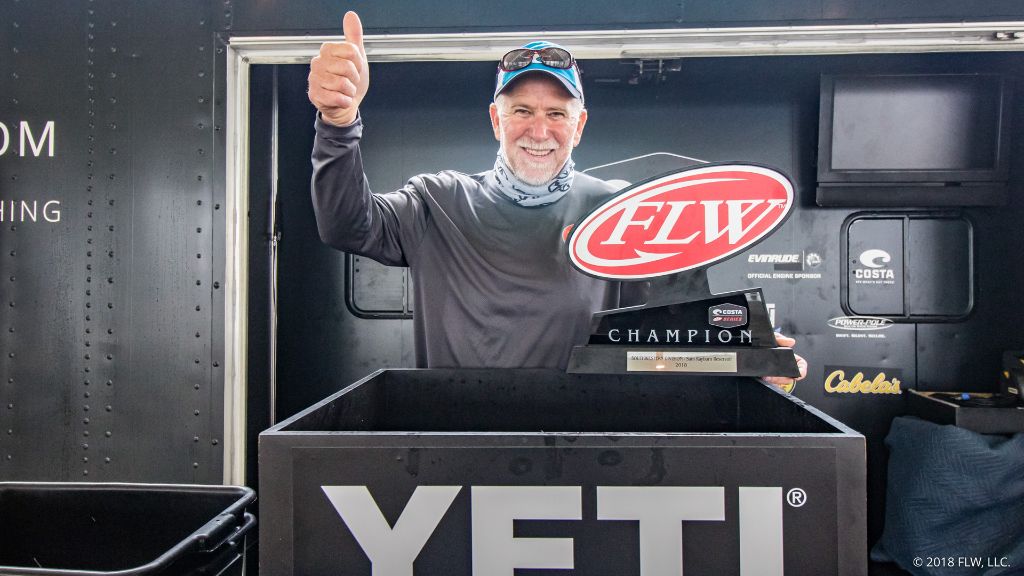 Going into the third and final day of the Costa FLW Series Southwestern Division event presented by YETI on Sam Rayburn, tournament leader Kevin Lasyone of Dry Prong, La., had accumulated a nice 10-pound, 8-ounce cushion atop the leaderboard.

As it turned out, though, he didn’t need to worry over protecting his lead to take home the winner’s trophy and a check for $54,200. That’s because Mother Nature intervened, and a severe fog delay caused the final day to be canceled.

For four hours on Saturday, the top 10 pros and co-anglers sat around staring into a pale white wall of vapor that restricted visibility to just 100 feet at times. Around 10:30, when hopes for a clearing were highest, the conditions actually deteriorated even more as the fog thickened and a steady rain began to fall.

At 11 a.m., Tournament Director Ron Lapin informed the finalists that the rest of the day would be canceled due to hazardous navigational conditions that showed no signs of improving. As a result, the tournament standings at the end of day two now count as the final tournament results.

When the decision was made, Lasyone let out a huge sigh of relief, knowing he had just earned his first Costa FLW Series win.

“This has been a long time coming,” says Lasyone, who has fished Rayburn for more than 25 years. “I hate it happened this way, mostly because I was looking forward to going out there and bearing down on my best spot. I’ve left it early the last two days trying to manage my fish, and I really wanted to spend all day there seeing what I could catch.”

Lasyone’s victory could be summed up in two words: old school. From finding his best spot, to the history of the spot, to his technique used to win, everything was old school. 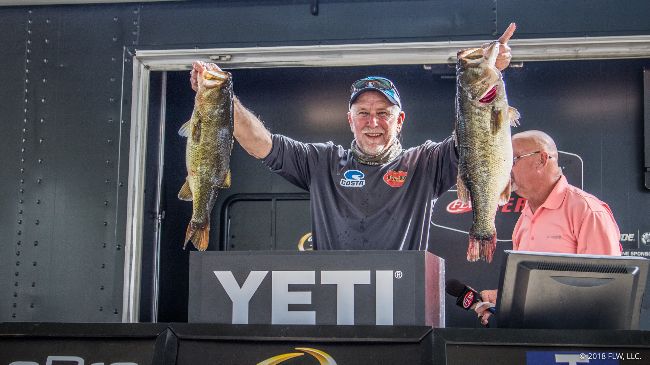 As Lasyone seined the hot spot, the mystery he could not figure out was how no one else found the area.

“It’s one of the biggest community holes on the lake,” he says. “I saw guys fishing it in practice, and I just knew someone else had found those fish. But when I got there the first day, it was wide open.”

Reflecting on his win, Lasyone figures there might be a couple of explanations for his exceptional discovery on one of the busiest tournament lakes in the nation.

First, his hot spot was located up in the Ayish Bayou arm of the lake, an area that has taken a back seat in popularity in recent years due to the huge catches that come out of the Angelina River side of the lake.

“The place is a community hole, but it’s an old-school community hole that used to be hot years ago,” Lasyone says. “I think it’s kind of fallen out of favor in recent years with the tournament crowd because the other side of the lake has been so good.”

Second, Lasyone used a rather old-school approach to finding the area: actually fishing.

In the modern age of side- and down-viewing electronics, idling and graphing – instead of fishing – has become an incredibly powerful way to find schools of fish. But Lasyone still does it the old-fashioned way.

“I think I found fish that no one else did because I put my trolling motor down and fished a mile and a half before I got a couple big bites,” he reveals. “And I didn’t just whip through there with a crankbait, either. I dragged a jig, which is about the slowest way to cover water that there is. I don’t even know how to use all that scanning technology. So if this tournament proves anything, it’s that you can still find tournament-winning fish the old-school way.”

Lasyone’s primary lure during the event was a 3/4-ounce V&M jig in black/blue/gold. He kept quiet about his jig trailer the last couple of days, primarily because of the color.

When fishing his best area, he kept his boat out in about 25 feet and cast up into 12 to 15 feet.

“I liked the steeper places,” he details. “The grass grew out to about 10 feet, and then there was timber and stumps out in front of the grass line in 12 to 15 feet. Those places where the grass and stumps mixed were the best.”

On day two, conditions become calm and slick. Lasyone noticed his jig bites suddenly fell off with the stillness. With that, he switched to a V&M Wild Thang Worm with a 1/2-ounce weight, which produced three bites in a row.

“I don’t know why it is, but when it gets still like that on this lake, these fish like a worm better,” he reveals.

An old technique on an old community hole – as Lasyone so candidly put it after his win, “Old school can still get it done out here on Rayburn.”