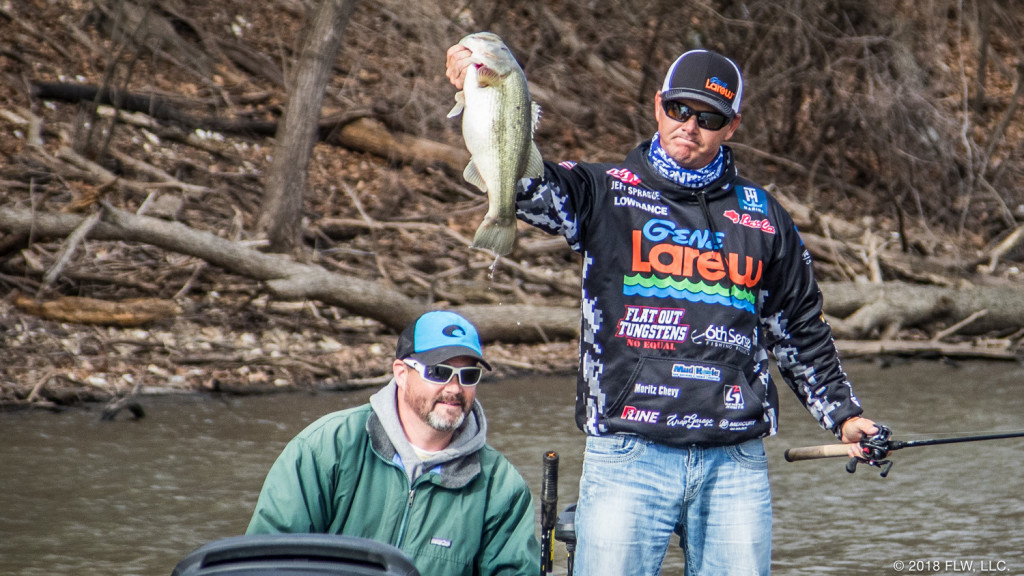 Christopher Jones may have missed his first day’s limit by one fish, but he boated just enough keepers in three days to win the Costa FLW Series Southwestern Division event on Grand Lake via tiebreaker. Jones tied pro Jeff Sprague with 47 pounds, 3 ounces. Day-three ties are broken by the previous day’s standings, so Jones won because he was in fourth on day two, and Sprague was in fifth.

The Bokoshe, Okla., pro caught most of his bass by fishing a BOOYAH Colorado-blade spinnerbait around docks. He also caught fish on a YUM YUMbrella Flash Mob Jr. with 3 1/2-inch YUM Pulse Swimbaits. 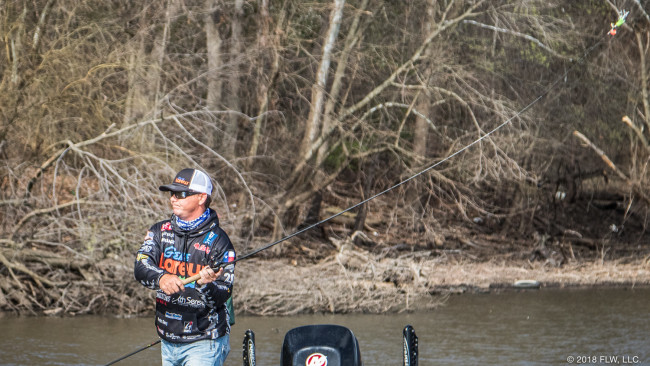 It was nearly a Cinderella story for Jeff Sprague, who started the tournament with only two fish for 6-15 on day one, which left him in 61st place. The Texas pro left the stage with a look of determination, the likes of which can lead an angler to a huge follow-up effort.

Suffice it to say, Sprague made a statement on day two by weighing the event’s heaviest limit – 22-2 – and rocketing up the standings to fifth place.

Sprague continued his tear the next day by sacking up 18-2, which was the final round’s biggest catch. Unfortunately, Sprague’s comment at the final day’s weigh-in proved prophetic, as Jones, who weighed in next, edged him on the tiebreaker.

“They say you can’t win a tournament on the first day, but you can sure lose one,” Sprague told the weigh-in crowd. “I’m almost 99.99 percent sure I lost this one on the first day.”

Sprague found some fish that were staging up to spawn. He was targeting docks and wood in shallow water in places where the fish hadn’t reached yet in practice. The warming trend that coincided with the later rounds of the tournament pushed fish up into these areas.

A 3/8-ounce 6th Sense Jigsaw prototype vibrating jig with a Gene Larew Hammer Craw trailer produced most of Sprague’s fish. He also caught some of his keepers on a 6th Sense Crush square-bill crankbait. The final day, he switched to a double-Colorado spinnerbait. 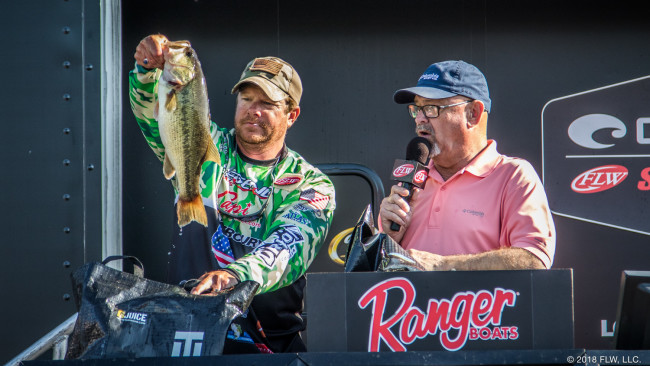 Troy O’Rourke followed a continuous path of betterment, both in terms of daily weights and tournament standings. After placing ninth on day one with 13-15, the pro from Natchitoches, La., added 14-12 and rose to sixth. A day-three weight of 16-4 gave him a tournament total of 44-15 and a third-place finish.

“My goal was to improve each day, and I did it,” O’Rourke says.

Square-bill crankbaits did all the work for O’Rourke this week. He used the SPRO Fat Papa 55 in red craw and a Bill Lewis Echo 1.75 in a crawfish pattern.

“I threw these baits in practice and didn’t have a whole lot of bites, but I figured out one area that if I went through it, I’d pick up a couple. I kept coming back every hour, and a couple more would be there.”

“Everything I fished was 5 feet or less,” O’Rourke says. “That crankbait had to hit those rocks. If you felt a little bit bigger rock and you paused when the bait hit it, they’d crush it.” 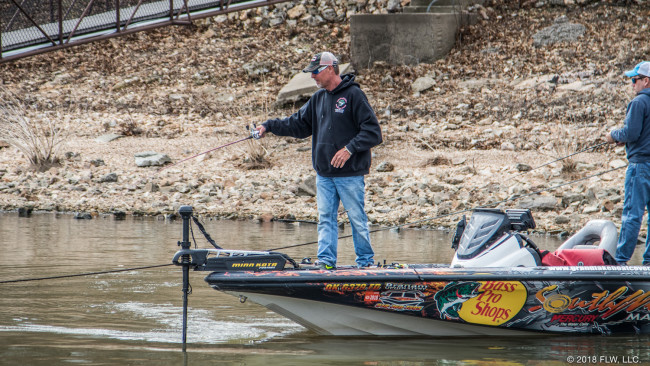 4. Hartsell battles back to fourth

Day-one leader Toby Hartsell set the early mark with 19-4, but quality eluded him on day two, as the Afton, Okla., pro caught a small limit that weighed 8-11 and dropped to seventh. Day three offered better quality, but Hartsell only caught three keepers for 8-2 and ended in fourth with 36-1.

“I fished absolutely pitifully today,” Hartsell said on Saturday. “I ran 40 or 50 spots today, and I just couldn’t get dialed in. I had a few bites; I actually lost four fish today, so I could’ve made a whole lot better showing. My back’s been messed up for the past couple of weeks, so I was just lucky to be able to fish this.”

“It seemed like you’d get a bite when you least expected it, and then you’d go the rest of the day and not get another bite doing the same thing,” he says. “So when I got a bite, I almost went the complete opposite direction.” 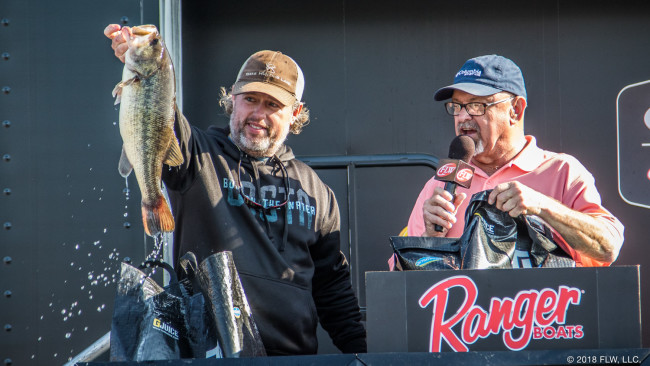 Blaine Covington’s comeback performance was second only to Sprague’s. He placed 56th on day one with 7-6, but made a big day-two move by catching 17-13 and rising to eighth. He gained three more spots in the final round by adding 10-14.

The Texas pro fished shallow rocks in a creek with clear water near the Pensacola Dam and found the day-three conditions had stymied his bite.

“Those fish were super-shallow, and I think the big fish were coming in there overnight because I’d catch them right off the bat each morning,” he says. “I had a big wave of fish come in the afternoon of day two, and they just never got there on day three. Once the wind switched to the north on day three, we caught very few fish. We caught some crappie and some drum, but that was it.”

“As soon it would come off that first shelf in about a foot of water, that’s where the fish would hit it.” 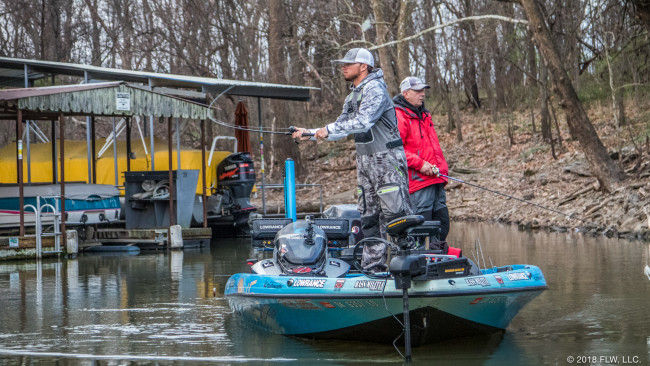 After a dismal practice yielded only seven fish, local pro Sheldon Collings knew he needed something special for the tournament. He found just that in a No. 5 Rapala Shad Rap.

“I knew the lake was fishing really tough, and I just didn’t think anyone would be throwing small baits,” Collings says. “I fished this around chunk rock banks and Sailboat Bridge [Hwy. 59].” 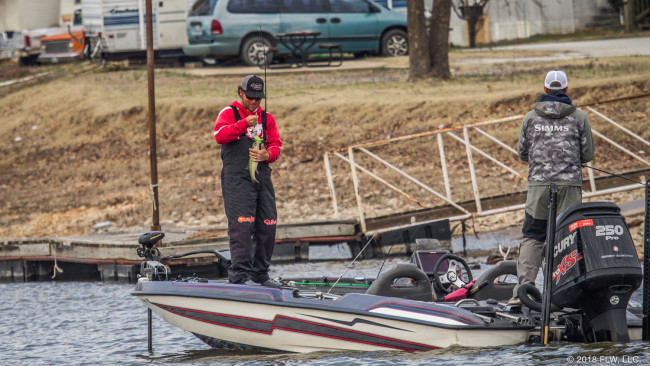 Kevin Ledoux came within 5 ounces of the day-one lead when he weighed 18-15. Day two proved stingy for the pro from Choctaw, Okla., and Ledoux missed his limit by two fish, dropping to ninth. He worked his way back up to seventh by adding another three fish for 8-8 and finishing with 33-6.

“Yesterday was a struggle to catch my three fish. Today was a struggle again,” Ledoux said on Saturday. “I ended up catching two pretty good ones. I was around good fish, but it’s just hard to get bit, and you have to cover a lot of water.”

Ledoux caught his fish on a 1/2-ounce white/chartreuse spinnerbait with double Colorado blades. 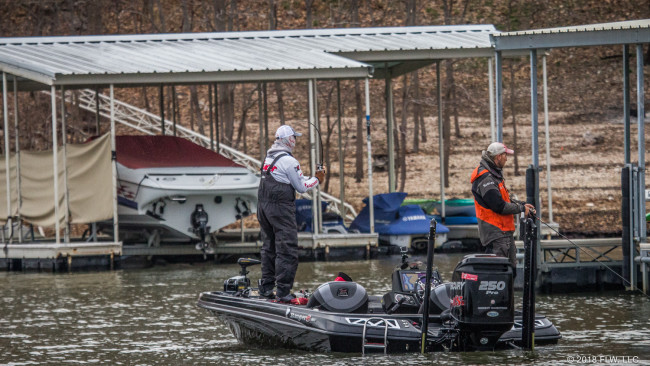 Oklahoma pro Curt Warren definitely rode the Grand Lake roller coaster. He caught a good day-one limit of 12-15, which put him in 10th place, and then bolted into first on day two with a 20-pound, 6-ounce limit. Day three, however, would deny Warren any keepers, and he settled in eighth place with 33-5.

Warren started each day throwing an umbrella rig, but he caught most of his fish on a 1/2-ounce Bass-X football jig in the Grand Lake special color with a Strike King Rage Craw trailer.

“The wind was blowing into my areas pretty good on day two. I went back on day three, but there was no wind blowing in there,” he says. “I tried to adjust and just didn’t get it done.” 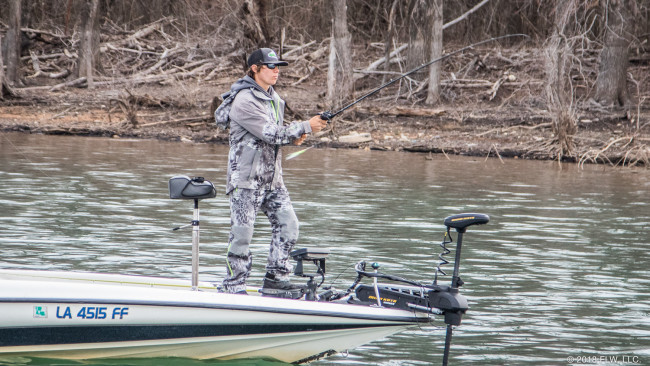 At 18, Colby Miller was the tournament’s youngest pro competitor, but his poise and confidence during the event’s highs and lows bespoke a levelheaded competitor with a bright future in this sport. The pro from Elmer, La., placed third on day one with 18-10 and held that spot a day later when he added 11-6. Day three was hard on Miller, and bagging a lone keeper that went 2-15 dropped him to ninth with 32-15.

Miller caught his fish on a 7/16-ounce V&M Pacemaker Skipping Jig with a V&M J-Bug trailer and a 1-ounce Chartreuse/white spinnerbait with double Colorado blades.

“I ran up the Elk River each morning and swam a jig. Then I’d move down south to fish pockets and cover a lot of water,” he says. “The pockets had to have wind blowing on them to push the shad in there.” 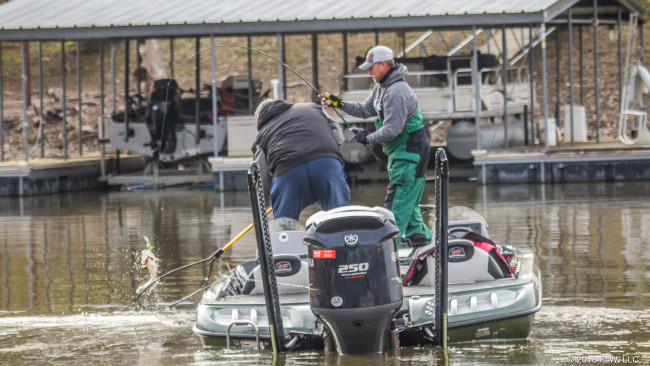 Jeff Reynolds got off to a good start with a day-one limit of 16-8, but when a tougher day two left him with only two keepers for 8-5, the Oklahoma pro slipped to 10th. In the final round, he managed only one 3-pound, 10-ounce keeper.

Targeting docks and wood, Reynolds caught his fish on a 3/4-ounce black/chartreuse spinnerbait with a Strike King Menace Grub trailer. With the fish positioned near the surface, he used a No. 5 Colorado blade to help keep his bait high in the water column.

Also helpful, Reynolds says, was holding his rod tip high during the retrieve.