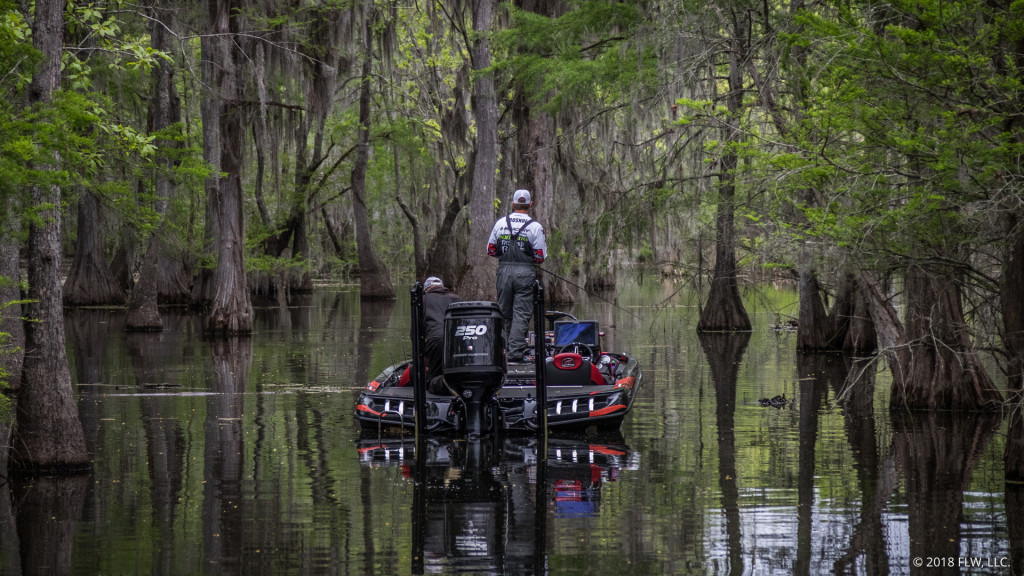 Last week was a busy week at Santee Cooper, when the Costa FLW Series swung through South Carolina to make its final Southeastern Division stop for the 2018 season.

In what has been a weird, wild spring across the Southeast, all kinds of patterns collided at Santee Cooper. Ronnie McCoy took home the hardware by sight-fishing and leveraging the shad spawn to his advantage, but many other patterns existed down through the rest of the top 10.

The tournament was presented by Bass Pro Shops and hosted by the Clarendon County Chamber of Commerce. Here’s the rundown of the top 10 most productive patterns. 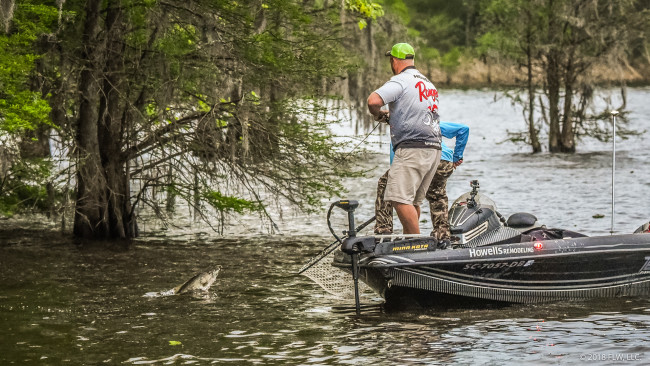 Daniel Howell of Prosperity, S.C., took an early lead on day one when he dropped a limit weighing 30-6 in the tub. He held the lead through day two, but stumbled on day three and finished second with 67-13.

Howell’s big day-one lead was propelled by two giant bass he caught on a BOOYAH Pad Crasher frog in the morning. From there he sight-fished a few more big ones to help the cause.

On days two and three he relied on a shad spawn up in the swamp.

Other than the frog, Howell caught a few on a Gambler Fat Ace (junebug) tied to 30-pound-test braid.

His shad-spawn lure was a 1/2-ounce spinnerbait with no trailer. 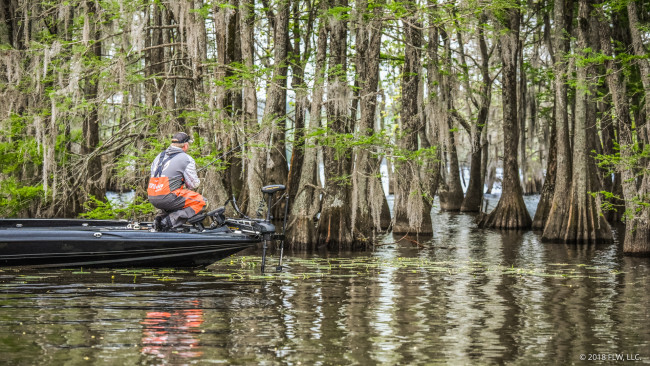 3. Canada punches and junks to third

Jonathan Canada of Pelham, Ala., fused two patterns – punching and targeting the shad spawn – to finish third with 65-2.

The first day was Canada’s best day, when he brought in 26-15. Those fish came from punching hyacinths in the swamp with a Reaction Innovations Kinky Beaver under a 1 1/2-ounce Fitzgerald Fishing Tungsten Flippin’ Weight on 70-pound-test Fitzgerald Vursa Braid with a Fitzgerald Stunner HD flipping stick. 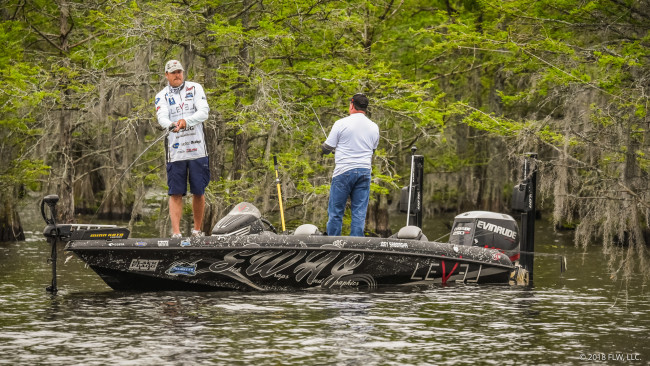 Joey Sabbagha of Prosperity, S.C., cashed in on the shad spawn for a fourth-place finish with 63-14 for the week. His biggest day was day two when he checked in 25-12.

Sabbagha also found shad spawning on cypress tree points in the swamp. His two preferred lures for the shad spawn were a 1/2-ounce spinnerbait with a Zoom Split Tail Trailer and a 3/8-ounce ChatterBait, with no skirt, trailed by a 4 3/4-inch Black Flagg Slikk Shadd swimbait. Both lures were fished on 20-pound-test Izorline and 7-3, heavy-action rods from Level Rods. 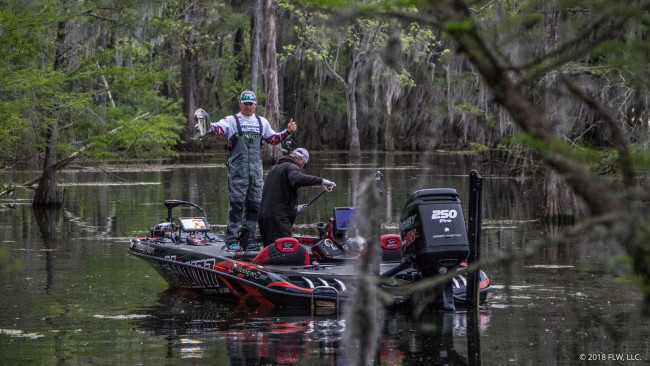 Robbie Crosnoe of Inverness, Fla., combined a 3/8-ounce Z-Man/Evergreen ChatterBait Jack Hammer and punching to record a fifth-place finish with a total of 60-12.

In between mats Crosnoe cast the ChatterBait (green pumpkin shad), which he fixed with a Z-Man Razor ShadZ trailer. 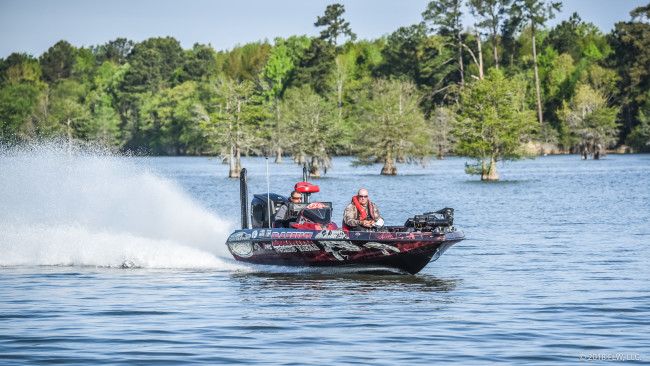 During the week, Thrift focused his efforts on isolated trees in the lower end of Marion and down in Moultrie. Most of his tree skipping was done with a Damiki Hot Dog, which he wacky-rigged on a 3/0 Berkley Fusion19 Weedless Wide Gap Hook and 20-pound-test P-Line braid with a 12-pound-test P-Line Tactical Fluorocarbon leader.

“The Hot Dog is a big, fat stick worm bait that’s heavy and casts a mile and skips like a stone,” Thrift says. “I could pole down way back off those trees and skip the Hot Dog right up to the base of those trees. Those fish had no idea I was there.” 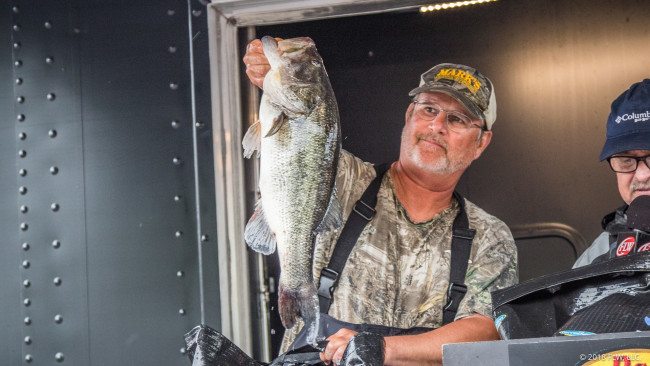 Kent Ware of Guntersville, Ala., used a rather unconventional color to finish seventh with 57-1 for the week.

Like many, Ware fished Yamamoto Senkos around trees and in the grass, but he prefers a black Senko for a little different look. Ware also rigs his Senkos weightless, Texas style, and throws them on hefty spinning rods with 40-pound-test braid.

Ware’s best day was day two when he used a break in the wind to ride down to Lake Moultrie and sack up 22-2. 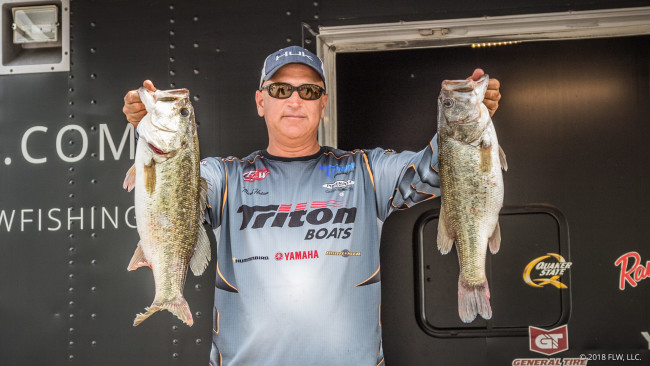 Mark Hutson of Moncks Corner, S.C., played the tree game to take the eighth-place spot with 56-10. 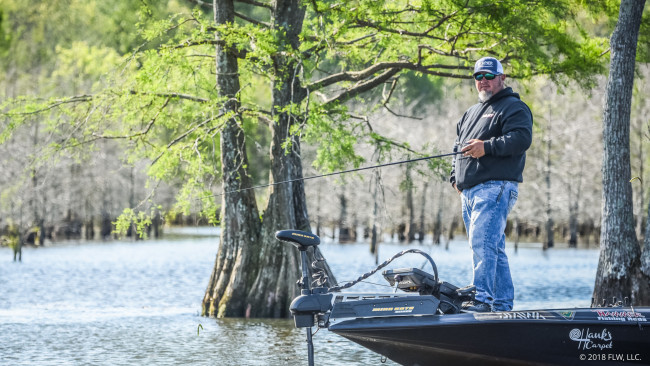 Gross’ bait of choice was a nail-weighted Zoom Trick Worm in green pumpkin magic on an Owner Wacky Hook.

For the most part he used baitcasting gear: a 7-foot, medium-action Hammer rod and 20-pound-test Daiwa J-Braid with a leader of 10-pound-test Seaguar fluorocarbon. Gross admits he kept a couple of spinning rods rigged up with the same line and worm for trees that were very low, or in case he “blew up” his casting reel with a backlash. 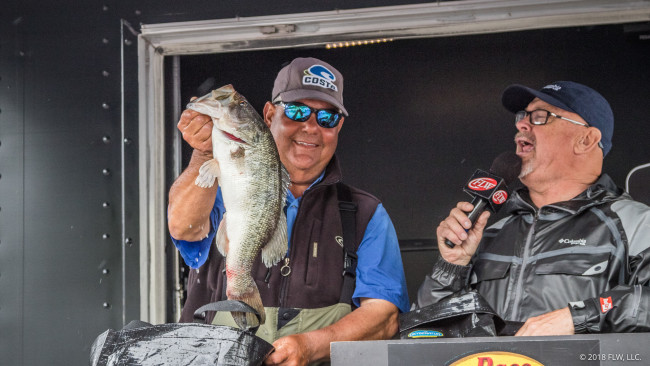 10. Costas plays the currents in the Diversion Canal

Lex Costas of Daniel Island, S.C., stuck to his guns in the Diversion Canal to catch 49-10 for the week.

Whether targeting stumps and boulders in the currents of the canal or deep brush piles out in the main lake, Costas fished a Carolina-rigged Yamamoto Senko and a Texas-rigged Zoom Dead Ringer to round out the top 10.