How to catch'em in the Ozarks 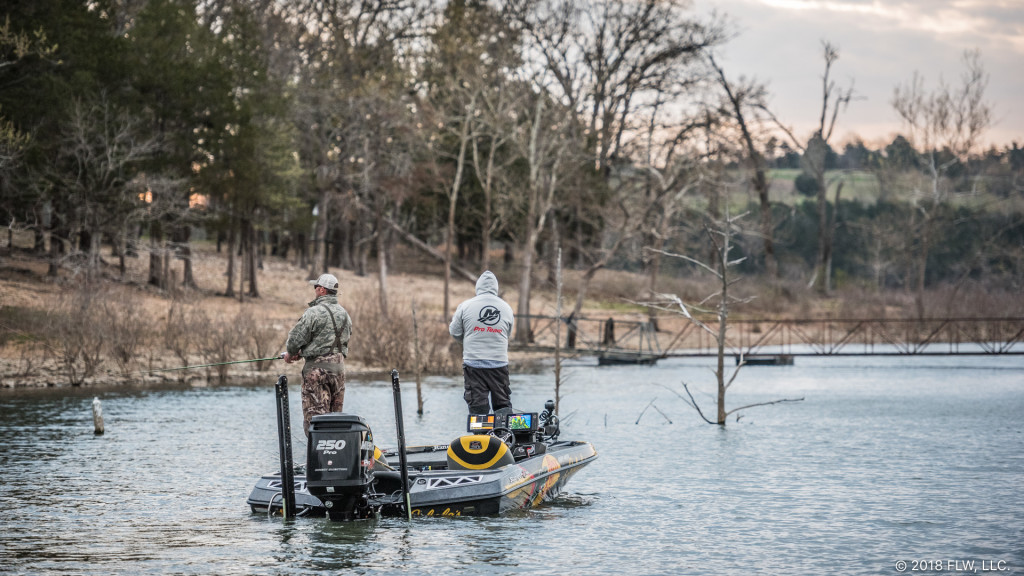 Sticking to a game plan despite its diminishing trend enabled Hensley Powell to amass a three-day total of 40 pounds, 12 ounces of Table Rock bass and win the Costa FLW Series Central Division opener presented by Lowrance.

With a cold front upsetting the productive pattern he found during practice, Powell saw his weights drop daily. Nevertheless, he could still count on getting enough bites to win while targeting a particular prespawn pattern. 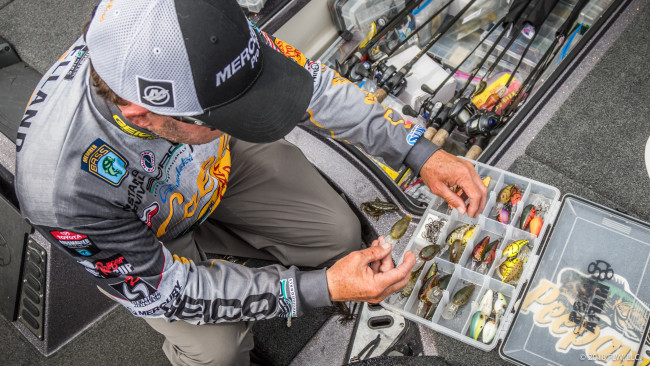 Mike McClelland’s second-place finish was no cake walk and if you ask the Arkansas pro to identify the key to his success, he’ll tell you it was adding a bit of diversity to his bait lineup.

“I used the SPRO Rock Crawler for probably 90 percent of the week and caught some really good fish,” McClelland says. “I threw that bait on a 7-foot Falcon 4-power cranking rod with 12-pound-test Sunline Crank fluorocarbon. Every now and then, if I wanted to get a little bit deeper, I’d use 10-pound test.”

“I also caught fish on a SPRO McStick Jerkbait,” he continues. “The thing that probably really saved me was a homemade wobble head jig with a Big Bite Baits Fighting Craw. To be able to do a lot of different things at a lake like this [Table Rock] really makes a difference.”

While the crankbait did most of the work for prespawners, McClelland used the jerkbait for suspended fish worked the wobble head to pick up an extra bite here and there. He looked for banks that were close to deep water where transitioning fish had convenient access in and out of the area.

McClelland fished any docks he came across, but his main producer was a gravel flat flanked by a line of timber right along a ledge. Typically, he’d find the fish holding between the bank drop-off and the adjacent timber. Most of his bites came in 8-15 feet of water.

McClelland was at or near the top the entire tournament. He placed second on day one with 16-12 and took over the lead on day two after catching 13-8.

Despite a quick start on day three, McClelland managed only four keepers that weighed 9 pounds. With a tournament total of 39-4, he ended in second place. 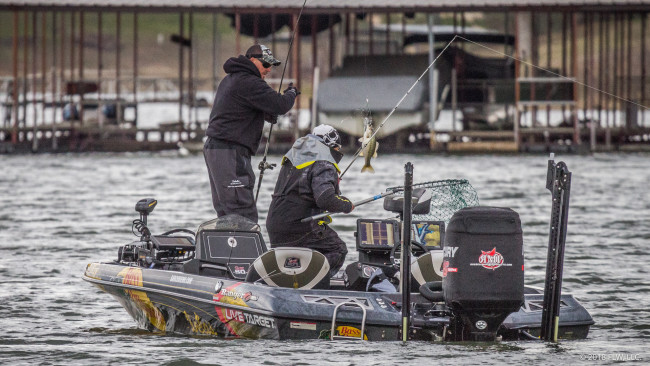 Jeremy Lawyer has about 25 years of Table Rock fishing memories, but for this tournament he wanted to erase them; electronically, at least.

“I took my Lowrance HDS 10s and cleaned them; I didn’t have a single waypoint on them,” the pro from Sarcoxie, Mo., confesses. “When I showed up, I wanted to fish like I had no past history. That really helped me focus on what the fish were doing rather than what I did the last 25 years here.”

Finishing 3 ounces behind McClelland, Lawyer says he boiled down his game plan over the course of the tournament.

“I used the Baitball Spinner Rig as a numbers thing and then tried to clean up with an Alabama rig,” he adds. “There’s a lot of controversy over the Alabama rig, but if you’re in the Ozarks and you’re not throwing it, you’re probably getting beat by it, so you just about have to do it.”

Lawyer fitted his Alabama rig with Zoom Swimming Fluke Juniors and a boot-tail shad in the center position — all albino.

“I caught them moving up on the gravel the first day of the tournament, but the second day I think all those fish had flak jackets and combat helmets on because there were so many people on them,” Lawyer notes. “I just started transitioning off them and on day two I found that about every fourth (flooded) cedar tree I went by had a nice largemouth in it.

“I caught a couple of big ones and that helped, but on day three, I just scrambled around to catch the ones I caught and never really figured anything out.” 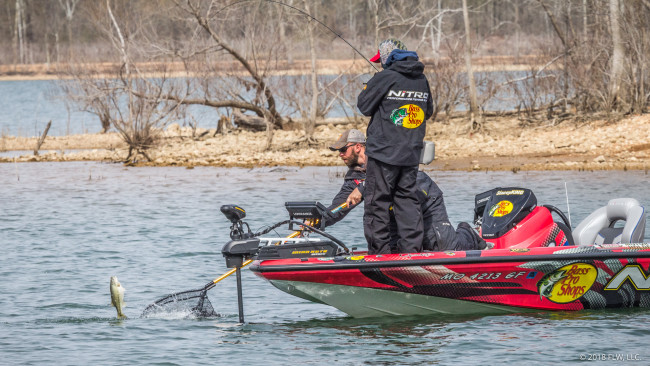 Stacey King is a member of Ozark royalty; and for good reason — he’s been rocking the regional tournament scene for several decades and passing along his knowledge to many, including McClelland, who praised King’s career influence during the final weigh-in. That experience and insight also helped the Reed Springs, Mo. pro in this event, as King turned in a fourth-place performance with 38-15 – 2 ounces behind Lawyer.

Leveraging his Table Rock know-how, King stayed within seven miles of the take-off site and followed a simple, yet effective, pattern of running points. Maximizing his fishing time by foregoing long runs, King caught his fish on a Bass Pro Shops Speed Shad swimbait rigged on a 1/4- to 5/16-ounce head and a Bass Pro Shops Teaser Tube on a 1/4-ounce head.

“I was fishing in about 10-15 feet and just covering a lot of water,” King says. “I didn’t fish a lot of places where I’d practiced; I just ran the wind.

“I struggled on the last day, but I finally caught a limit. I spent a lot of time throwing an Alabama rig, trying to catch a big one, but never did get that bite.”

King fished his baits on a 7-2 medium Bass Pro Shops Johnny Morris series rod and matching reel with 8-pound-test XPS fluorocarbon. He says the lighter line helped get his baits down quicker.

“I practiced with heavier line, but I got more bites on the 8-pound when I put it on, so I stuck with it in the tournament,” King says. 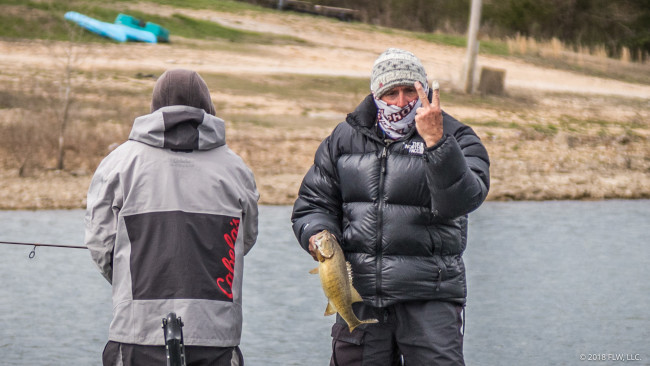 5. Jenkel Gets Right to the Point

Derek “Duke” Jenkel mounted the tournament’s biggest comeback by recovering from a 64th-place day-one performance (11-7) and racing up the day-two standings with 15-12 to earn his final-round spot in sixth place. He found only four keepers on day three, but adding 7-15 pushed him up a spot to finish fifth with 35-2.

Jenkel targeted secondary points at the mouths of pockets and picked off prespawners with patient, methodical presentations. He caught his fish on an 11/16-ounce swivel head jig with a Strike King Rage Bug. Jenkel used two trailer colors, blue craw and watermelon red.

“I stayed on the lower end of the lake and probably didn’t get six miles from the dam,” Jenkel says. “You could get bit on just about any secondary point, but if you found one that had small chunk rock and pea gravel, you could bank on there being one down there that would bite.

“It may not be the one you want, but he’s down there — and there’s usually more than one. You could ride around and look and say ‘Look right there’ and catch one.” 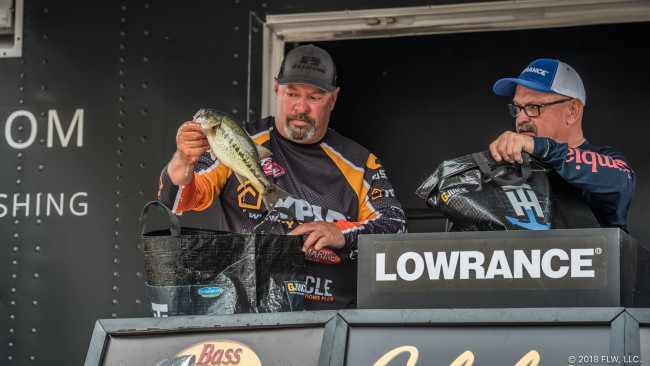 Sometimes, you have to listen to the signs, especially when you believe them to be of divine nature. Such was the case for Smyrna, Tenn., pro Kevin Meeks, who credits his sixth place weight of 34-9 to an amazing pre-tournament occurrence.

“I had a horrible practice, and the last day I got hung up with a spinnerbait,” Meeks explains. “I pulled it and got it loose and my bait came up with a SPRO Rock Crawler crankbait. This was sitting in my boat and (fellow angler) Ryan Saltzman was staying with us and he said ‘This is a sign from God and you need to throw that bait.’

“I caught three keepers in three days of practice. Every fish in this tournament came on that Rock Crawler except for one, until I broke it. Then, I caught my last keeper on a swivel head. It’s amazing; I stuck with it and that’s how it worked out.” 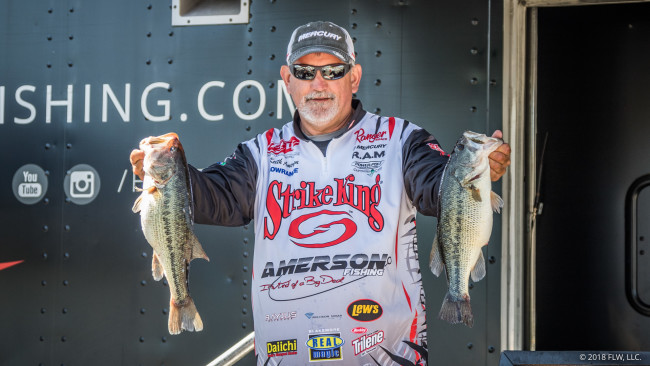 In the tournament’s closest finish, Keith Amerson, of Bethel Springs, Tenn., had a three-day total of 34-8, which landed him an ounce behind Meeks. Amerson placed sixth on day one with 16-0, dropped to seventh for day two with a 10-pound, 10-ounce limit and remained in seventh on day three with four fish that went 7-14.

Amerson caught most of his fish on a Strike King Titanium umbrella rig with Strike King Rage Swimmers in ghost shad, along with a Strike King KVD Jerkbait in the strobe-shad color. He also caught two keepers on a Carolina-rigged Strike King Game Hog. His targets were long points that extended into the depths.

“I’d fish from the outer ends to about 100 yards in and then pick up and run to the next one,” Amerson recalls. “I threw the reaction baits in the wind and then I’d use the Carolina rig when it got slow and I didn’t have any wind.” 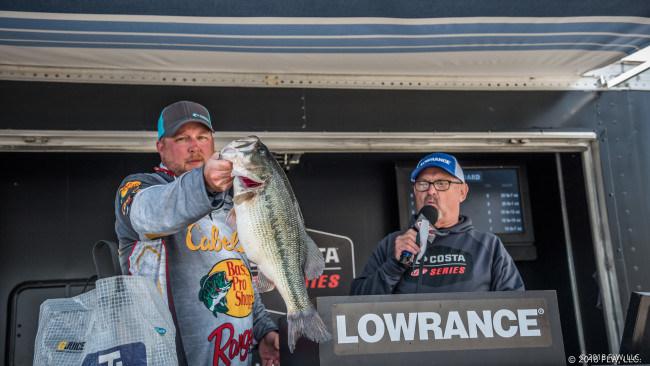 Missouri pro Graden Hansen placed 30th on day one with 13-1, rose to fourth on day two after adding 15-12 and ultimately settled into eighth with 33-3 when day three produced only two keepers for 4-6.

Hansen says he did most of his damage with an Alabama rig with four Zoom Swimming Flukes and a 3.8-inch Keitech swimbait in the center. On day two, he also caught a few fish on a 3/8-ounce All-Terrain Tackle Finesse Jig with a Reaction Innovations Smallie Beaver.

“I chased the wind,” Hansen says of his targeting strategy. “If there was no wind on a spot, I didn’t even bother fishing it.”

Day two produced a Table Rock giant that would stand as the tournament’s biggest bass and buoy Hansen’s overall performance.

“About 2 o’clock, I rolled up on a point, threw an Alabama rig and caught a 7-2,” Hansen says. “She kinda pulled me back into throwing that again [on day three] and trying to go for the win, but I came up a little short.” 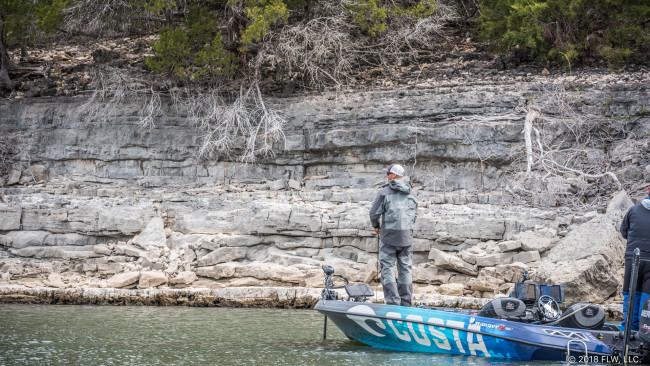 Texas pro Todd Castledine made a big move from 58th on day one to ninth on day two. Day three was less productive and Castledine added two fish for 4-13 to finish ninth with 30-13.

With conditions finally becoming conducive for his signature technique, Castledine caught most of his fish off beds.

“All my big ones came from sight fishing a (Texas-rigged) Strike King Rage Bug,” Castledine says. “Everything else came on a Strike King 5XD. Those were just kind of fish that I tried to go catch throughout the day, because I knew I couldn’t catch a limit every day sight fishing.

“The last day, I rolled up into one pocket and there was 18-19 pounds. I just didn’t have enough time left to do anything with them.” 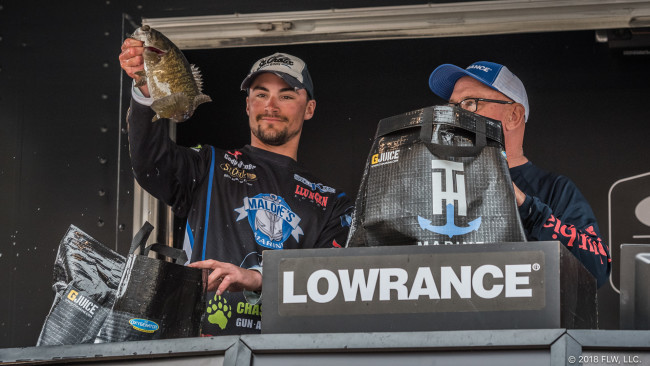 Wisconsin pro Cody Hahner got off to a good start with a fourth-place limit of 16-8 on day one. Following that with 9-3 and 2-5 on days two and three pulled down Hahner’s score and left him in tenth place with 28 pounds.

Hahner caught most of his fish on a SPRO Rock Crawler in prespawn staging areas. He also caught fish on a 3/8-ounce Super K jig with a green pumpkin Zoom Super Chunk.

“The areas I fished had chunk rock and pea gravel in small pockets, or small secondary areas,” Hahner said. “I was looking for the quick-hit areas. I couldn’t get bit on any of the big areas.”