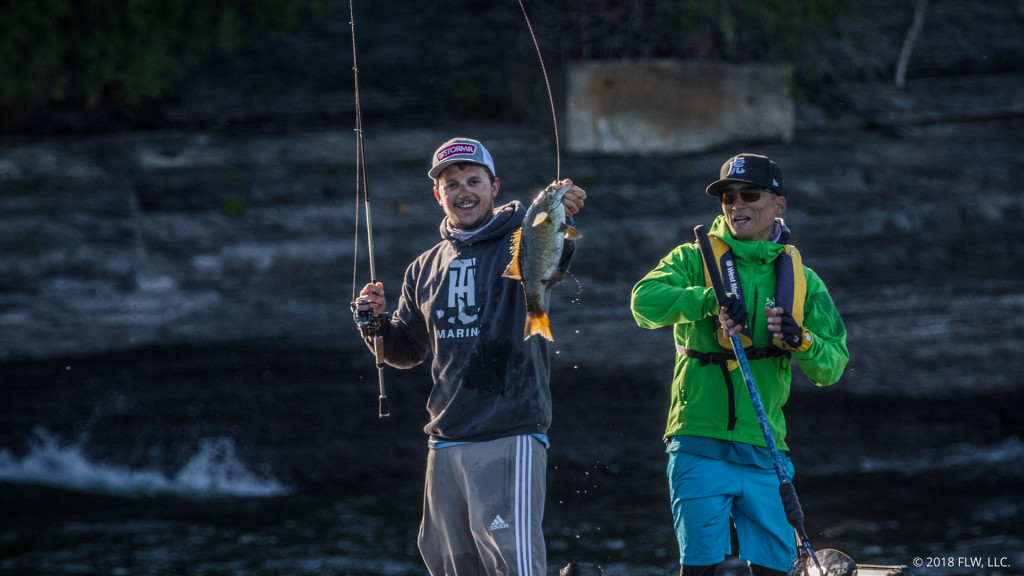 Day one of the Costa FLW Series Northern Division event presented by Power-Pole on Champlain started like most Champlain tournaments seem to – with the pros taking off into an already daunting chop. It’s not necessarily always windy on Champlain, but more often than not it seems to blow during some portion of any multi-day tournament.

Though bright and sunny, there are plenty of 2- and 3-footers rolling down the lake from the north. Some pros have been getting right in the mix, and others are tucking out of the wind. The only part of the lake where it’s likely to play a huge role is the mid-lake region, where a north wind can really mess up the Vermont shoreline. It’s not out of the question that anglers running down there will catch them, but the degree of difficulty will be much higher.

We lit out to the north of Plattsburgh to get things rolling, and the anglers are doing very well with a variety of techniques. So far, sight-fishing for smallmouths seems to be the leading tactic, but there are folks doing other things as well. Carolina rigs for smallies have made an appearance, and spinnerbaits and jerkbaits have put fish in the boat, too. The largemouth guys are mostly sight-fishing, flipping and tossing wacky rigs – usually around the reeds.

Our leaders so far aren’t surprising – Austin Felix had just under 20 pounds of smallmouth around 9:30 a.m., Ryan Latinville had four for a stout 16 pounds early, Ron Nelson checked in with 20 pounds of smallies and there are surely some other pros approaching the 20-pound mark with smallmouths.

Also doing well, Jimmy Kennedy and Jimmy Mize have about 16 pounds, John Hunter has 15 pounds or so and Tim Wilson has four largemouths for about 14 pounds. Jim Dillard had three early (with one 3+), Wil Dieffenbauch had a couple decent ones early too and Joseph Fonzi has four for about 9 pounds. Carl Jocumsen had a 14-pound limit mid-morning but says a lot of his bedding fish have split. Chris Johnston had three for about 9 pounds in the first 45 minutes of fishing.

Kyle Ratliff had three early. Gary Krammes had two good ones and two small ones before 8 a.m. and Buddy Gross says he’s got about 14 pounds. Brian Christy figures he’s got 14 pounds as well and newly minted boater Justin Hicks says he’s got a small limit for 11 pounds. Jonathan Case also has about 15 pounds, and Kevin Miller has one, but it’s a good one.

All in all, weigh-in should be pretty lit. We’re almost certainly going to see multiple 20+ bags of smallmouth, and it looks like the wind won’t put a damper on the weights at all. So, if you want to see smallies, come on out or tune in.