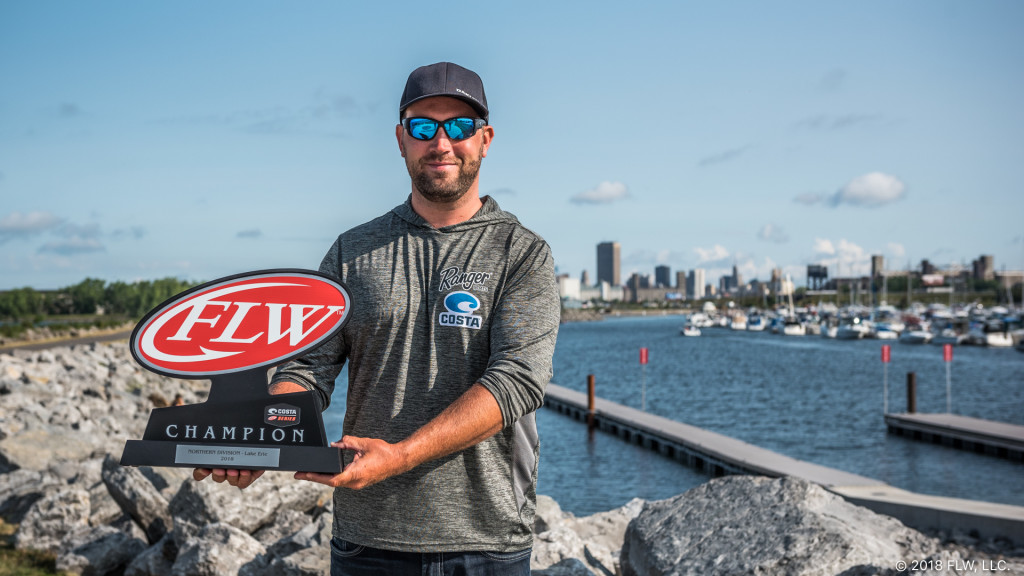 In any tournament on the eastern end of Lake Erie, a competitor’s flight number often dictates whether he goes after numbers or size first thing. When Neil Farlow left Safe Harbor Marina in boat 156 on the opening morning of the Costa FLW Series North Division event presented by Polaris and hosted by Buffalo Niagara Sports Commission, his was an easy choice to make: He opted for quality over quantity.

It was a wise move for the 31-year-old Canadian from St. Catharines, as he went on to catch a limit of smallmouths totaling 24 pounds, 4 ounces and won what proved to be a one-day event. The competition was shortened by buffeting winds from the west, which prompted tournament director Ron Lappin to cancel the last two days because of unsafe boating conditions.

For his efforts, Farlow collected $87,500, which included a Ranger Z518 rigged with a 200-hp outboard. His win moved him into sixth place in the Northern Division standings and upped his annual earnings to more than $90,000.

“A bunch of guys were on the big schools way ahead of me. I knew as soon as I got out there and saw all the boats that I needed to go check out some of my old spots for bigger fish,” says Farlow. “It’s all rock and sand on the drops, but over time I’ve managed to find a few places that have something else going for them. If you get to the right depth, there are so many contour changes and rock that aren’t on the maps. That’s where you don’t find so many fish, but you find the size you need in a tournament where everybody’s catching fish.”

Starting on one of his isolated spots on the Canadian side, Farlow noticed something important almost immediately. His partner, Matt Thoin, caught five keepers before Farlow had even one. A change of baits didn’t seem to matter to the smallmouths, and then Farlow saw that Thoin was casting out his drop-shot rig, while Farlow was more or less fishing straight down.

“Matt was kicking my butt so I decided to start casting around like he was doing, and it worked,” says Farlow. “My second fish was the big one [6 pounds, 6 ounces], and everything sort of smoothed out after that. It was a subtle bite, and they didn’t want the boat near them. The casting angle didn’t seem to matter so much as where the boat was. Every time I got on top of the fish they either wouldn’t bite or it would be very slow.”

The Canadian’s drop-shot bait was a Reaction Innovations Flirt Worm in green pumpkin. Sometimes Farlow would shorten the length when he thought the smallmouths wanted a smaller profile. Using a Quantum Smoke spinning combo, he fished it on a 12-inch leader of 6- or 8-pound-test Gamma fluorocarbon tied to 10-pound-test braided line. Structure such as single boulders or irregular bottom in 20 to 30 feet of water produced best.

“Mainly I just cast it out and dragged it back slowly. Sometimes I would jump it up off the bottom just trying to get their attention, but I don’t know that it made much difference,” he says.

Farlow ran his milk run in Canada and the U.S., and even though the wind picked up later in the day, it wasn’t more than his Ranger 522D deep hull could handle. Picking off a fish here and another there, he caught only eight bass all day, but they were the right size. Thoin, who wound up with 19 pounds, finished 23rd on the co-angler side.

Farlow started fishing the Costa FLW Series in 2017, but wasn’t able to fish the last tournament of the season because of a conflict. This time around he plans to fish all three events, including the last one at 1000 Islands, and sees a possible career in the FLW Tour up ahead.

“I’ve been looking at the Tour for a few years. Now is not the best time, though,” he notes. “I eventually want to get there. I love the competition. Maybe in a few years I’ll take a closer look at the Tour.” 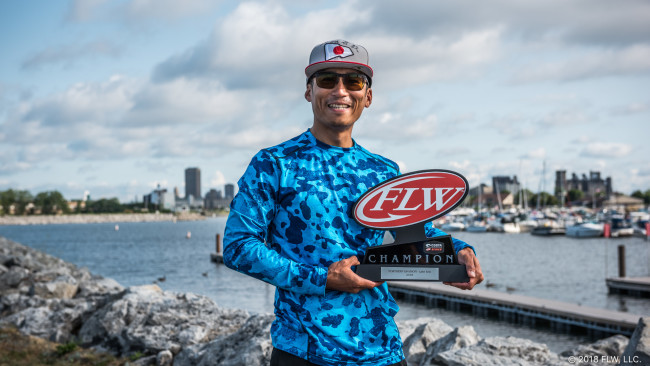 Ushio goes against the grain for co-angler win

Contrary to what just about everyone else seemed to be using, co-angler winner Sakae Ushio didn’t need tube jigs or drop-shot rigs to catch his 23-pound, 7-ounce limit in the first round on Lake Erie. Instead, his main bait was a 4-inch Z-Man Big TRD he was fishing on a Ned rig.

The 38-year-old deli employee was paired with FLW Tour pro Chris Johnston and made the most of the Canadian’s choice of fishing spots. During the day, Ushio boated more than 20 keepers, including a smallmouth that weighed 5 pounds, 14 ounces. His winning limit was third best overall in a one-day fishfest that saw 53 limits caught that weighed more than 20 pounds each.

“The most important thing was to keep the rig in contact with the bottom,” says Ushio, of Tanawanda, a suburb of Buffalo, N.Y. Ushio dedicated the tournament to his original hometown of Okayama, Japan, which was devastated by typhoon flooding 10 days ago. “If the wind blew the line so the bait would come up, or if the boat drifted back and pulled the line up, it was no good. The fish wanted it right on the bottom. If I kept it there, they would hammer it. They were very aggressive, but only at the bottom.”

Ushio and Johnston fished in water that ranged from about 28 feet deep to about 36 feet deep. The co-angler champ used a Fenwick spinning rod and Daiwa spinning reel loaded with 7-pound-test Toray fluorocarbon. He declined to name the color of the bait, but presumably it mimicked a round goby, the main forage fish in Lake Erie.

Ushio collected $27,250 for his efforts, which brought his 2018 Costa co-angler winnings to $29,250. His performance at Erie also boosted him into first place in the divisional standings with 493 points. With the Northern Division finale set for Sept. 6-8 on the St. Lawrence River out of Clayton, N.Y., Ushio is trailed by Wataru Iwahori in second with 490 points and Kevin Hesson in third with 486 points.