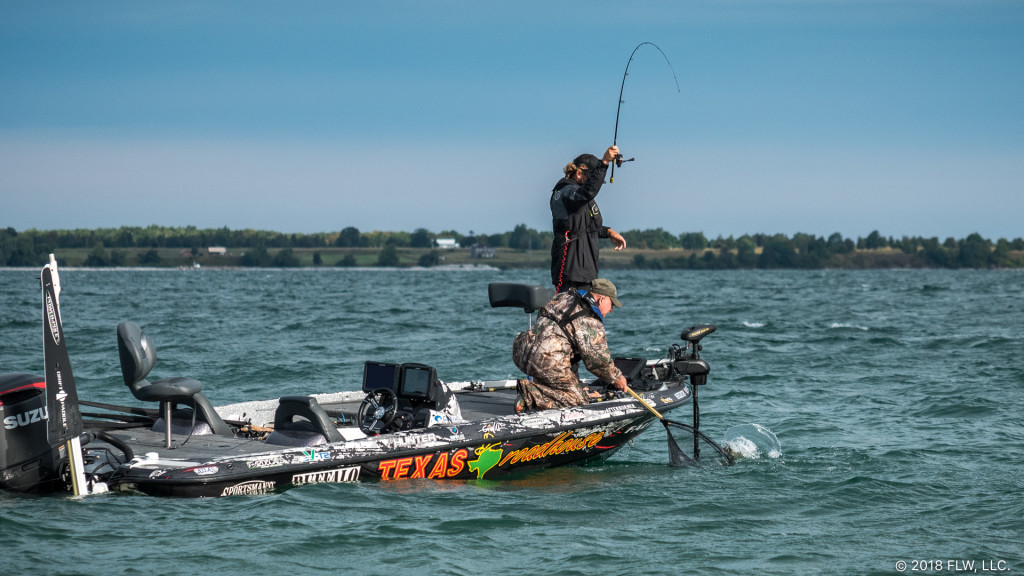 After making the 24-hour drive from Texas, Kyle Hall showed that Texas-sized bass can come in smallmouth form by weighing 26 pounds, 4 ounces to take the lead after day one of the Costa FLW Series Northern Division event on the 1000 Islands. Early reports noted that fishing may be a bit off for the last event of the Northern Division season, which is presented by Navionics, but the leaderboard says otherwise. Behind Hall, 46 of the pros brought in limits weighing over 20 pounds and stacked in that list is a who’s who of smallmouth hammers hungry to chase down the title.

Seems all is well in Smallmouthville.

Here’s a peek at how the rest of the top pros did their damage on day one. 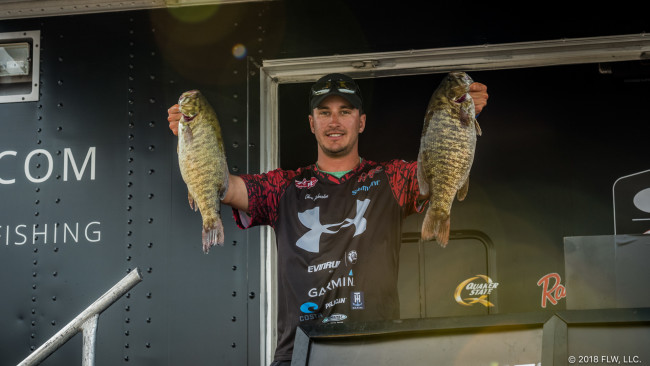 The last two times the Costa FLW Series has stopped at the 1000 Islands, the younger Johnston hasn’t finished lower than third. So, it’s no shock to see him in the mix after day one where he weighed 25-12 to sit just 8 ounces back of Hall.

At the registration meeting on Wednesday, Johnston hinted at the fact things would either go really bad, or really good. Obviously, things went OK.

“I ran out to the lake and it took me about an hour to get to my first spot because of the waves,” says Johnston. “I caught a couple fish off my first spot, ran to the next and caught a few and just kept jumping around. I eventually got on a spot and caught 10.

“I probably only made about 10 different stops all day because it was rough, but I’d run back to some of the more productive places and catch more fish after I let it sit. Most of my spots you’d only catch a fish off it and then you’d have to let it rest, but other areas I could catch multiples.  It’s a bit of a mystery what you’re going to catch. It may be a 3-pounder, or it may be a 6-pounder. You just have to keep hitting spots over and over because the good ones are mixed with the smaller ones.”

Naturally, a drop-shot with a Jackall Crosstail Shad was his go-to.

Since Johnston has years of experience on Lake Ontario he has no shortage of areas to fish. While he’s going to check some of the areas he caught fish off today, he’s not afraid to run to a different area of the lake. And with tomorrow offering calmer conditions, he’ll have endless options at his disposal. 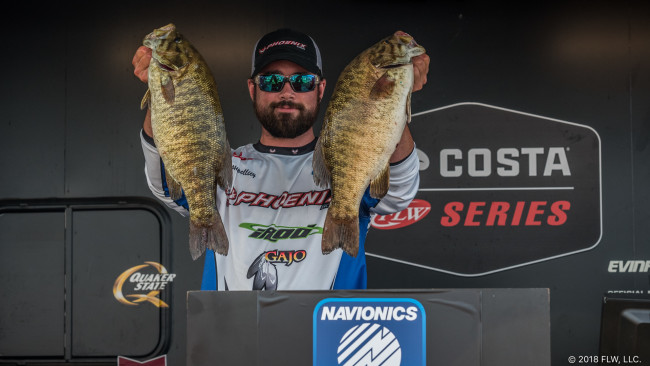 Though it’s just his second FLW event, Jesse Spellicy isn’t showing any signs of the jitters. His 25-3 bag was nearly enough to have him riding shotgun into Friday, but he’s just fine with where he’s at.

Spellicy has a ton of experience on this fishery, yet wound up catching them on a completely new pattern he’s never unlocked in previous trips to the 1000 Islands.

“I fished the river and got on a deal I felt I could run with after practice,” says Spellicy. “I figured it out last weekend and it’s something I’ve never done before.”

With the weights as good as they are, things could have been better. Most of the locals that fish the area noted that the north, northeast wind stacking against the current didn’t help much. Still, Spellicy made it work.

“In the first two minutes of the day I caught a 6-3, which is the biggest bass I’ve ever weighed during a tournament,” Spellicy explains. “I fished maybe a dozen areas and I only caught them off one place I found in practice. The rest were all off new water from running my pattern.”

By about noon Spellicy had his weight for the day and spent the rest of his time trying to help his co-angler get his fish.

The drop-shot seems to be king right now, but Spellicy says he caught them on a bit of everything. From casting and winding to finesse stuff. He doesn’t think that’ll change much for tomorrow.

“I’m probably going to run new water tomorrow and stick with my pattern,” Spellicy says. “I just pick one off here, pick one off there. I need to keep moving and I have a lot of river left to cover.” 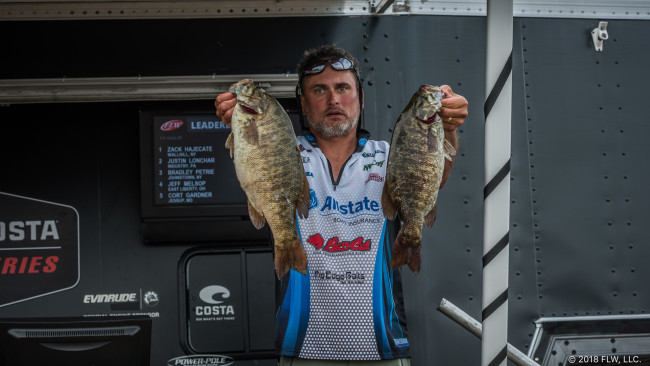 Years spent fishing on the 1000 Islands and guiding in the area helped Ken Golub wrangle 24-9 worth of smallmouth – and in quick fashion to boot.

“I fished two spots and was done in probably 20 minutes,” Golub says. “I ran about as far as far goes. Once I had my fish, I spent my time trying to help my co-angler get his.”

“What I’m fishing is current specific. The wind today repositioned the fish maybe 100 feet off of where they were, but it moved them to the side, so I found them pretty quick.”

Like Johnston and Spellicy, Golub has a wealth of knowledge of the fishery, but he doesn’t think that is necessarily a good thing.

“If anything, I have too many spots I want to hit,” Golub notes. “I just need to tell myself to slow down and trust my electronics.” 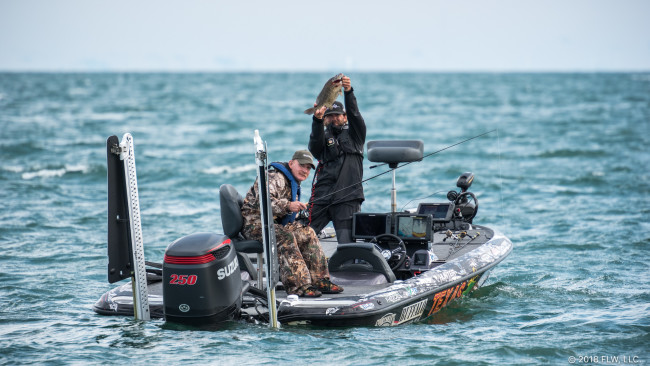 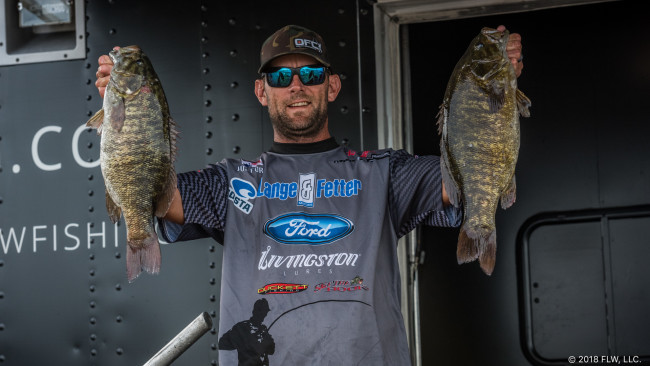 5. Hunter, Ford tie to round out the top five

With identical bags of 24-6, John Hunter of Shelbyville, Ky., and Joey Ford of Bowmanville, Ontario, are neck and neck at the fifth spot.

Just because the weights are high, doesn’t mean things were easy. For most, bites are still hard to come by, they just happen to be the right size when you get one. Hunter, on the other hand, lies on the opposite end of that spectrum.

“I caught a ton of fish today,” Hunter remarks. “So many fish I can’t even remember how many times I culled. It was for sure the biggest bag of smallmouths I have ever weighed.”

Hunter spent his time in one general area, but says there are a few sweet spots that he keys on.

“I caught most of my fish on a drop-shot by dropping it on them when I’d mark a fish on my Lowrance,” says Hunter. “I didn’t even make it to what I think is my best area or run around as much as I wanted because of the wind.”

With Friday supposed to have calmer conditions, Hunter will be freer to explore Lake Ontario.

“I don’t know why, but I just click with the Great Lakes. I’ve never been on Lake Ontario before this week, but I just had a good feeling about it.”

Hunter may have had a banner day in terms of numbers of fish and size, but Ford had to grind it out for his weight.

“I don’t live that far from the 1000 Islands, so I’m pretty familiar with it,” Ford says. “I had a good basic understanding of what to look for in practice. There are a lot of fish in transition right now, so you can catch them shallow, deep or in between.”

Ford put in most of his effort around the mouth of the river and lake. Despite the massive size of the fishery in play, Ford knew avoiding the crowds would be key.

“The biggest thing for me was to make sure I was away from guys and avoiding pressure,” explains Ford. “I think I saw two boats the whole day.

“I didn’t catch a lot of fish, but I got enough of the right bites. I think I left enough alone for tomorrow.”

Ford had at least 20 pounds by 9 a.m. and upgraded with a 6-pounder close to 11. From there, he tried to put his co-angler on fish.

“I knew I had an OK bag, but didn’t think it was 25-pounds worth,” Ford went on to say. “I looked for other areas to fish tomorrow, but being a fishing guide back home I really tried hard to get my co-angler a limit.”

Ford says he only fished about 20 percent of his water today, leaving plenty of fresh water for tomorrow if need be. He may need it if he hopes to crack his first top 10 of his career, which he is on a good pace to do.