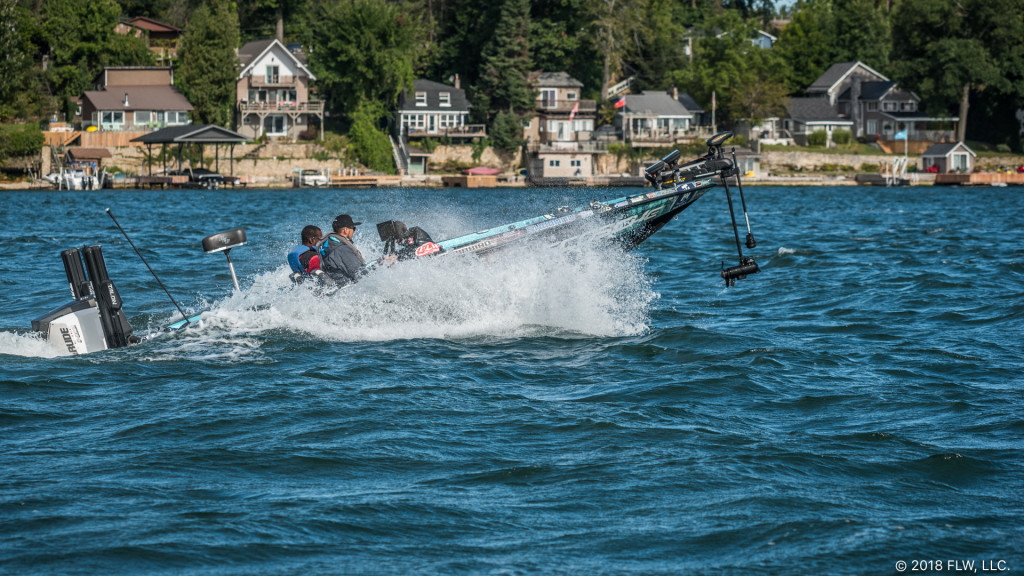 Cooler, windier and sunnier conditions kicked off the last round of competition for the Costa FLW Series Northern Division event on the 1000 Islands presented by Navionics and while the fishing has been pretty stellar all week, things aren’t as hot today. With Lake Ontario placed off-limits due to the wind and waves, the top 10 pros and co-anglers are all fishing in the St. Lawrence River today, whether they like it or not.

Kyle Hall has led the last two days and despite 4-foot rollers in the river he’s still keeping to his run-and-gun strategy. The hard wind is negating the current more than it did on day one and the fish are lock jawed because of it. Hall has a limit for around 15 pounds, but the bigger quality bites he’s been getting just aren’t there. Still, he’s covering ground with his drop-shot on humps and main-river ledges from Clayton up to the mouth of the river.

Down the river more, Chris Johnston didn’t have a keeper by 8 a.m. before packing it up and making a long run east, leaving us in his wake.

Carl Jocumsen has maybe been the most dialed on the river bite this week, but the wind is making it tough to drift the right spot and he has four in the box for about 12 pounds.

Joey Ford was near the mouth of the river and had one decent fish in the box. However, he was catching small non-keepers on almost every drop, so it may just be a matter of time before he finds their bigger brothers.

The rough conditions made it difficult to run around to find the other pros, but with the caliber of anglers out there you can bet they are finding fish. Most everyone knew there was a chance of being confined to the river for a least a day, so folks all practiced in the river just in case. The ways things are going, whoever catches them big today might be able to walk away with it regardless of their starting position.

The wind has let up some and that could help spark some key bites in the waning hours. Be sure to tune in to the live weigh-in at 2:30 ET and see if Hall can hold on, or if someone will make a final-day rally.