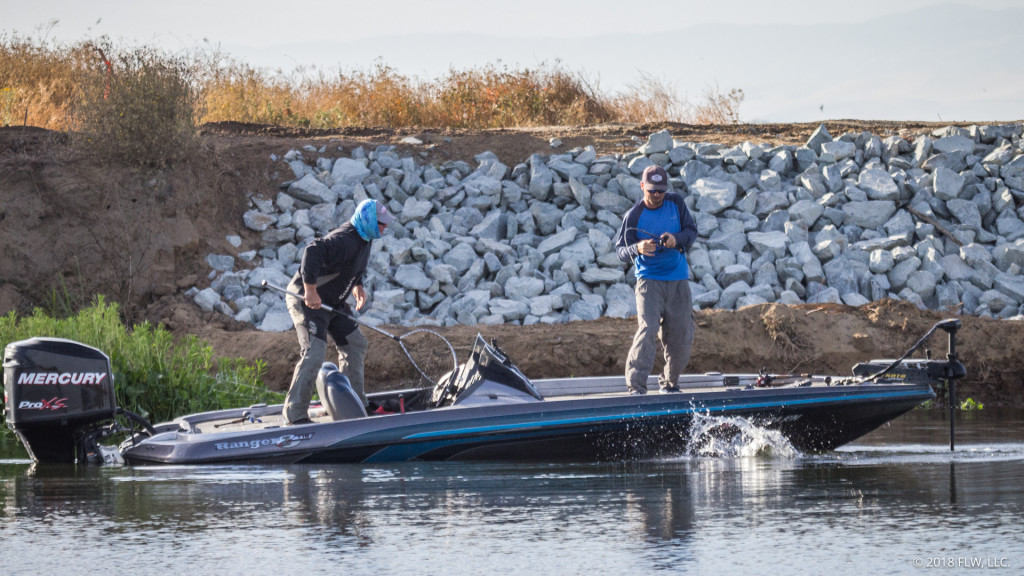 Everyone knows the California Delta is one fickle fishery, and that disposition seems to be on display today for the final round of the Costa FLW Series Western Division tournament presented by Power-Pole. Day-two leader Gregory Troughton carried a ton of momentum into day three with a lead of more than 6 pounds.

However, we spent the better part of the morning with Troughton, and the magic was not happening. Not to say it will not happen at some point, but the leader will need to have a strong afternoon.

Both Nick Nourout and Ken Mah – third and fourth, respectively – were catching fish and showed signs of promising performances. Mah showed off a 6-pounder that bit a punch bait after blowing up on a frog.

The wild card today will be Jerred Jennings. After leading day one, the Stockton, Calif., pro dropped to second yesterday. We weren’t able to locate him on the water today, so we have no read on what he may have caught.

If he wrecked ’em and Troughton stumbled, we could see the top spot change for a final time.

Elsewhere, we saw fifth-place pro Jeremy McKay early, and he had a couple of keepers on reaction baits. Ninth-place pro Kyle Grover was fishing the same area and also had a couple.

Today’s action was a mix of frogs, flipping/punching, drop-shots and bladed jigs. The latter yielded a 5-pounder for first-place co-angler Jack Farage, who had his limit by mid-morning. Elsewhere, third-place co-angler Rodney Brinser had a solid limit by around 9:30.

Brinser says he had committed to the drop-shot all week, as it allowed him to fish any habitat feature and show the fish something different than the punching his pro partner, Nourot, was doing.